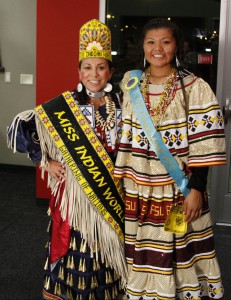 ALBUQUERQUE, N.M. — With pow-wow season in full swing, thousands of dancers and vendors descended upon Albuquerque, N.M. for the annual Gathering of Nations Pow-Wow. Happening alongside the Gathering was the Miss Indian World 2012 competition.

Miss Florida Seminole Jewel Buck made the trip to Albuquerque on April 24 for the three-day competition and competed against 26 young women from April 26-28 for the title of Miss Indian World. The winner represents Indigenous people all around the world.

The competition consists of an interview, a traditional talent exhibition, a dance competition and a personal essay.

For the talent portion, Buck sang a traditional Creek hymn and proceeded to translate the hymn for the audience. Several Tribal members attended the talent competition and said Buck represented the Tribe with dignity and honor. Buck’s stage presence and personality made a lasting impression on all those in attendance.

After the crowning, the new Miss Indian World and fellow honorees were escorted to meet the press, and Buck congratulated the winner.

“I got to know Jessa Rae very well,” Buck said. “My advice to her is to treat every experience like your last because one year goes by fast.”

Buck represented the Seminole Tribe of Florida proudly and left the competition with a great experience and new friends among the strong Native woman throughout Indian Country.

“I would not change a single thing,” Buck said of her experience. “Walking into Grand Entry was like walking into a football stadium. As we were walking through the thousands of people and they kept cheering us on, we all walked with such pride in our own cultures.”