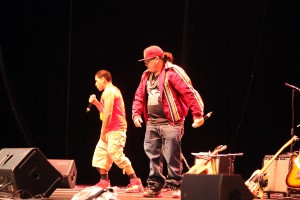 The young cousins grew up together in Hollywood, have always called each other brother and have repeatedly been told they look alike.

Savage Twins gave their debut performance on the main stage at the Seminole Tribal Fair on Feb. 9 and released their first CD a couple weeks before. Although the music is hard-core rap, the message is positive.

“We just want to make sure people understand we aren’t trying to be a bad influence on younger kids,” Huston, 19, said. “We really want to bring the right message.”

Rap is often associated with violence, disrespect and negativity. But the Savage Twins have turned those negative messages around and instead focus their lyrics on staying away from drugs and alcohol, going to school and taking the right path in life.

“Our message is to do something productive with your life, stay away from the negative and be positive,” Brandtley, 17, said. “Don’t let anyone tell you that you can’t do something; you can do anything you want if you believe in yourself.”

Huston, who was never a fan of rock ‘n’ roll, became interested in rap when two of his friends started recording rap songs. Writing lyrics came easily to him – he’s been doing it for most of his life.

“I remember when I was a little kid I used to write words that rhymed and put them together and showed it to my mom,” Huston said. “I always had the rhythm for rap. I grew up around rock; my mom is a big fan and I went to concerts with her.”

The cousins each write lyrics from personal experiences and things they have witnessed growing up on the reservation. Both were inspired by another Tribal rapper, the late Markell Eli Billie.

“I got my style from him,” Huston said. “He passed away about a year ago from drugs and alcohol. We take that on and switch it around and not rap about getting high but say how it can affect the youth and the elders. We grew up watching people pass away from drugs and alcohol, so it’s easy for us not to do it.”

The performance at Tribal Fair, which included their songs “The Truth,” “Rez Life” and “Ambition Remix,” was received with enthusiastic applause.

“The best feeling is when you have a finished product that you put your heart and soul into,” Brandtley said. “If people like it, that’s a good feeling, too.”

The Savage Twins take their art seriously and expect to continue to write about real life in the future.