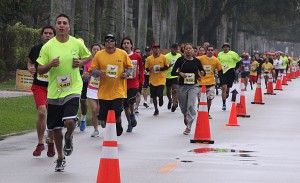 HOLLYWOOD — The 13th annual Rez Rally got off to a soggy start, but by the time 672 runners, walkers, strollers and wheelchairs crossed the starting line, the sky had cleared to let the sun shine bright on the Hollywood Reservation. The weather held the rest of the day and was pleasantly cool, perfect for a 5K race.

“We could have used the rain yesterday or tomorrow,” said Hollywood Councilman Marcellus W. Osceola Jr., who walked the route with his family. “Even if we just get together, it isn’t a lost day.”

The Tribe gathered on Jan. 19 for a day of fun, fitness and camaraderie. The added dimension of competition between reservations and individuals made the day a full experience. The competition was fierce yet good-natured; everyone wanted their reservation to come out on top. Hollywood/Fort Pierce/Trail boasted the largest team with 337 participants, while the next highest were Brighton/Tampa with 130, Big Cypress with 129 and Immokalee/Naples with 76. Within each team, additional rivalries and individual goals could be found.

“My archrival, Skeeter Bowers, is injured today,” Hollywood Board Rep. Chris Osceola said. “This might be the year I beat him.”

The Tribalwide race was begun to create an enjoyable day for people to get together and experience a positive wellness event for the entire family, said Suzanne Davis, Allied Health program manager.

“[We wanted] an event that would appeal to both the avid fitness enthusiast and someone who was just starting out,” Davis said. “[It] incorporates both a ‘fun run’ and the competitive spirit to try to bring out the most people to represent the each rez team. It started with 300 people and has grown from there.”

The road to Tribal headquarters and the streets of the reservation were crowded with runners, speed walkers, people casually strolling with family and friends and parents pushing strollers. Although people packed the streets, everything went smoothly on the Rez Rally course.

“The highlight was the courteousness of the participants this year,” said Connie Whidden, Health Department director. “It was really evident along the course on 64th Avenue because we had people moving in two directions. It was great to see the people staying to one side when they needed to and also moving over when the faster runners were coming through. It takes cooperation from everyone at every level to make this event run smoothly.”

People of all fitness levels participated in the rally. The first person to cross the finish line was Jesse Spearo with a time of 17:53. Despite his ongoing recovery from a stroke, Chairman James E. Billie proved he could overcome his physical obstacle and finished the race with wife, Maria, by his side.

One Big Cypress family was represented in the rally by four generations. Susie Jumper, her daughter Sherri J. Hunter, grandson Keith Jumper, granddaughter Katinna Kodi Jumper and great-grandson Kyler Henry Jumper, 1, traversed the course together. Susie rode with Kyler on her scooter as the rest of the family walked along side.

“We like entering,” Susie said. “We always do this together.”

“Last year I ran and blew my lungs out,” he said. “I’ll be walking today.”

Which he did along with some of his Big Cypress teammates.

“I usually jog it,” Brighton Councilman Andrew J. Bowers Jr. said. “This is a great turnout despite the weather. The captains did a great job.”

Team captains on each reservation promoted the rally, ensured everyone had registered and worked with the Health Department to make it a safe event. About 100 Tribal employees worked to make sure everything went off without a hitch, regardless of the early morning gloom.

“The highlight for me was the enthusiasm of everyone who was ready to rally despite the rainy weather,” said Edna McDuffie, Community Outreach coordinator for the Big Cypress Wellness Center. “Paul Buster gave his invocation at the opening of the event, thanking God for the rain and also for the sunshine. Just as we were lining up for the race, the rain cleared and the sun came through. That was really special.”

At the end of the day, the Tribe congratulated the winners in each category and forgot about rivalries. Kids played on rides, everyone shared a healthy meal, and anticipation for next year’s Rez Rally in Brighton began.