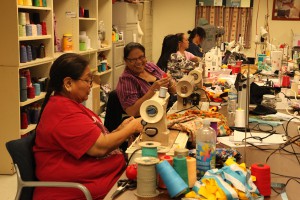 HOLLYWOOD — For weeks before Tribal Fair, the workroom at the Hollywood Community Culture Department buzzed with activity. People came to work on a variety of traditional crafts for competition or sale. The workroom stayed open after hours to allow extra time for devoted crafters to complete their patchwork, beaded pieces and dolls. Culture staff members helped out when needed.

In the workroom, there was an easy camaraderie around the sewing machines and at the crafts table. The whir of machines served as background music while women worked on intricate patchwork strips and made conversation.

Preschoolers came by one morning to learn about making frybread, and young teens came to make beaded jewelry and dolls. Beginners learned the traditional crafts from the more experienced.

“Back in the day, families did these crafts for income. They sold them to tourists,” said Bobby Frank, Hollywood Cultural director. “Now people mostly do it for themselves or to sell to other Tribal members. We don’t want this to be a dying art; we want to get younger people interested in crafts. In some families, it is still the responsibility of the young ladies to learn patchwork. They’ll be getting married, have families of their own and will need to clothe their children.”

Patchwork is common in most Tribal members’ wardrobes. Starting at age 5 or 6, children are usually taught to sew, Frank said.

Passing the arts and crafts skills from generation to generation is an important way to keep Seminole culture alive.

And by the looks of the entries in the Tribal Fair, the arts are alive and well within the Tribe.