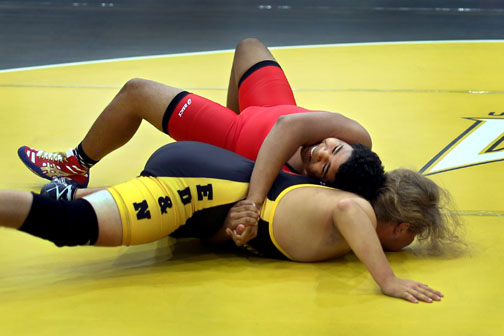 REGINA, Saskatchewan — Getting to western Canada turned out to be only part of the challenge that Team Florida’s medal winners had to tackle in the North American Indigenous Games (NAIG).

Similar to others from the Seminole Tribe of Florida contingent that competed as Team Florida, Samuel Micco Sanchez and his older brother, Jesse Sanchez, endured travel difficulties trying to get to NAIG in Regina, Saskatchewan, where thousands of athletes from throughout the U.S. and Canada gathered for the Olympic-style competition July 20-26. Team British Columbia finished with the most medals (160) and Team Saskatchewan captured the most gold (72).

Stuck in a Detroit airport due to airline problems, the brothers from Fort Gibson, Okla. were in danger of missing a mandatory weigh-in for wrestlers. That’s when the Tribe’s jet came to the rescue and whisked the boys from the Motor City to Regina.

The move paid off as Samuel, 14, won the gold medal in the 220-pound class and Jesse, 17, earned silver in 187. Having medals placed around their necks came despite the competition being held in a freestyle format, which surprised the brothers who wrestle a different style in Oklahoma.

“When they said freestyle, we had no idea what to do,” Samuel said the day after his victory while sitting with his family in the lobby of the Regina Radisson.

In addition to the travel issues and being unfamiliar to the format, Samuel also had to wrestle in a heavier class. Both brothers weigh 187 pounds. Since two members from the same team can’t wrestle in the same class, Samuel was booted up to 220 while Jesse stayed at 187.

“It was a big deal,” Samuel said about the shift.

“[Samuel] was wrestling kids 40 pounds heavier; it was almost like David and Goliath in the finals match,” said Sammy Johnson, Fort Gibson High School’s wrestling coach who coached the brothers at NAIG.

Samuel won his first two matches to reach the championship bout against Nick Metoxen from Oneida Tribe of Indians of Wisconsin. NAIG’s final match of its one-day wrestling segment at the University of Regina proved to be golden for Samuel, who overcame an early points deficit.

“We were down in the first period, at one point, 8-0 or 8-2,” Johnson said. “I changed some things that needed to be changed. We went to a crotch-lift late and ended up scoring a bunch of points off it. That kind of changed the whole match for us and put us in a place to win. We stayed in good position and wrestled really smart.”

A vocal throng of supporters from the Tribe in the gym helped boost the spirits of Samuel, who won by points on technical superiority.

“I started hearing everybody in the stands. I could tell [Metoxen] was tired. I used that as an advantage,” Samuel said.

Just like his brother, Jesse reached a final by winning his first two matches. Both were by lopsided scores, but in the 187 final, Jesse had to settle for silver after losing to Daniel Cyr from Saskatchewan.

“He was really strong. I had no cardio left. I couldn’t keep up with him,” Jesse said.

The brothers, who earned the only medals for Team Florida, were part of a small, but well-dressed contingent of Seminole athletes. The Seminole Recreation Department provided all of its athletes with team shirts, jackets and backpacks embroidered with their name and the Tribe’s logo.

The bears, buffalo, deer, turkeys and wolves never moved on the winding trails at the Wascana Archers Club, a forested patch amid rolling plains about 15 miles north of Regina. Even if the wooden animals were mobile, they probably wouldn’t have stood a chance fleeing NAIG’s archers, including Team Florida’s Valholly Frank.

Competing against teenagers who were up to five years older than her didn’t faze Valholly, a sixth-grader at The Sagemont School in Weston. The 11-year-old competed in the 16U female division in Traditional style.

Similar to golf, the archers were sent out in threesomes and foursomes on basically a front nine and back nine, which consisted of 20 targets a side. Archers often had narrow clearings between themselves and their prey, which sometimes were partially hidden behind brush and trees.

Piercing a bull’s-eye painted in the middle of a circle on the animal was worth 11 points, but going for aces wasn’t Valholly’s strategy.

Her focus was making sure she hit targets anywhere there were points. For archers who missed targets, their wayward arrows tended to be lost for good amid dense brush.

Valholly’s first round on the morning of July 24 turned out to be her highest scoring among five rounds spread across three days. She registered 101 points in the round, which was third highest out of seven competitors.

“I was shooting to hit the targets because points you can add them, but if you hit three 11s and you miss all the rest, that’s 33 points, not 101,” Valholly said.

Valholly warmed up for NAIG by practicing, as she always does, on Sundays at a range in Immokalee. Hunting live animals is something she would like to learn someday, but for now she enjoys competitions such as NAIG.

The future bodes well for Valholly, who finished fourth overall with 390 points.

Valholly’s Team Florida teammate Raylon Eagle, who is heading into her sophomore year at Okeechobee High School, finished eighth in 19U female Compound.

“It was OK. I missed a few shots,” Raylon said after her first round in which she notched a couple 10s.

Her best round came in the afternoon on day two when she scored 121 points. Also on day two, Team Florida’s Kyler Bell, 14, scored his most points, 113. He finished eighth in the 16U male Traditional.

Nikko Doctor didn’t win a medal in athletics, but the 9-year-old from Hollywood still emerged as a star, at least for one day.

Facing kids twice his size who were far older and jumped far greater distances, Nikko earned plenty of admiration from officials and spectators as the youngest and perhaps the smallest competitor of all NAIG track and field athletes. In fact, after finishing well back of the pack in the long jump, Nikko sprinted through an impromptu high-five line with spectators. Soon after, a mother approached Nikko and his coach, Eric McCree from the Seminole Recreation Department.

“Can my daughter take a picture with him? She’s inspired by him,” the mother asked.

Nikko gladly obliged as he posed with Ava Owl, 9, from Manitoulin Island, Ontario before returning to the stands with his mother, Meka Burgess-Doctor; grandmother, Vivian Braswell; and younger sister, Mailanie Doctor.

“I think I did terrific. I like running and exercising,” Nikko said.

Earlier in the day, Nikko competed in an 80-meter heat. McCree videotaped the race on his phone and then proudly showed how Nikko blew past two runners to finish fourth.

“He just missed a time to make the finals. He passed one and saw another one and passed him,” said McCree, whose trip to Canada was somewhat of a homecoming. McCree played in a couple exhibition games last year for the Hamilton Tiger-Cats of the Canadian Football League.

Nikko concluded his track events in a 150-meter heat. His time of 27.23 seconds wasn’t fast enough to advance.

An undermanned, but determined Team Florida 19U basketball team managed to end its trip to NAIG on a positive note.

“It was a big deal to get a win,” said Marcelis Thomas, Team Florida’s top rebounder who snagged pivotal boards down the stretch to preserve the victory.

Back-to-back 3-pointers from Trey Boone and Ricky Garza sparked Team Florida to 58-53 lead. Trey drilled another 3-pointer from in front of the team’s nearly vacant bench with one minute left to seal the victory.

Afterward, Chairman James E. Billie and coach Charles Fisher praised the team as the sweaty players, most of whom played with injuries, sat in a hallway outside the gym.

“They were resilient. They played with a lot of heart and a lot of character,” Fisher said. “We grew as a family. We played the Seminole way, never giving up and always fighting. Every game [opponents] were taller and bigger…, but every game we had the biggest heart.”

Trey, a smooth-shooting guard on a team full of only guards, was Team Florida’s top offensive player, scoring 18, 35, 33 and 27 points in the four games. The team also included Alphonso Alvarado, Josh Boromei and Damian Garza.

Team Florida’s losses came against champion British Columbia (82-26), Nanavut (80-75) and Eastern Door and the North (71-66). In one game, Team Florida finished with four players; in another, it was down to three due to players fouling out.

It’s easy to know which PGA Tour golfer is the favorite among members at hilly Tor Hill Golf Course in Regina. A life-sized poster of Saskatchewan’s Graham DeLaet greets golfers as they enter the pro shop.

No pros were on the course for NAIG, whose field included four members from Team Florida. The Osceola brothers, Conchade, 11, and Byron, 9, competed against older golfers in the 17U division.

Conchade was the only member of the team who broke 100. He shot a 99 on the first day of the three-day tournament and followed up with a pair of 105s.

The smiles Team Florida rifle shooting members sported when they hit a bull’s-eye were right on target.

Shooting at a cardboard target filled with six circles about 54 yards away, Tanner O’Donnell fired his .22-caliber rifle and then paused to peer through his diascope to see the result.

With a bull’s-eye confirmed, he turned around and flashed a broad smile to his father, Robert O’Donnell, during NAIG’s 19U male rifle shooting competition.

The perfect shot was one of a few for Tanner on the final day of shooting, which featured shooters in a prone position, or lying on their stomachs. Earlier in the event, shooters shot from their knees and while standing.

Whatever position, Team Florida, which was coached by Joe Frank, enjoyed their days on the Regina Wildlife Federation’s range.

“It’s real nice up here. The wind is a little bit of a challenge, but we’re willing to take it,” said Tanner, 9, who was up to a decade younger than some of his competitors in the 19U division that included teammate Conner Thomas, 13, who finished 10th overall, three spots ahead of Tanner. Conner earned second place in the prone position for group A on the final day.

Tanner has been shooting since age 4. His friend and teammate Eecho Billie started even younger. Eecho first picked up a BB gun at age 2 and has moved all the way up to a .243 rifle.

Everyone used .22s in NAIG, which was Eecho’s first competition with guns.

“I’ve done archery competition; this is my first time for riflery, but I’ve been shooting for so long,” he said.

Both Eecho and teammate Hunter O’Donnell – Tanner’s brother – shined on the final day as each had third-place finishes in their divisions in the final prone competition.

While most of NAIG’s venues were in Regina or close by, Team Florida swimmers Jada Holdiness and Danyelle Boromei had to travel an extra 45 miles to compete in Moose Jaw on three different days.

Both 13-year-olds debuted in the 50-meter freestyle.

On day two, Danyelle was 12th in the 50 backstroke, one spot ahead of Jada. Later, Jada, who swims for the Fort Myers-based club program Gulf Coast Swim Team, finished seventh in the 50 breaststroke. She concluded her events with a ninth-place finish in the 100 breast.