HOLLYWOOD – Casey Camp-Horinek knows first-hand what kind of disruption drilling into the Earth can cause, which was one reason why the member of the Ponca Tribe of Oklahoma’s Business Committee expressed gratitude to the Seminole Tribe for hosting its first Renewable Energy & Sustainability Conference. 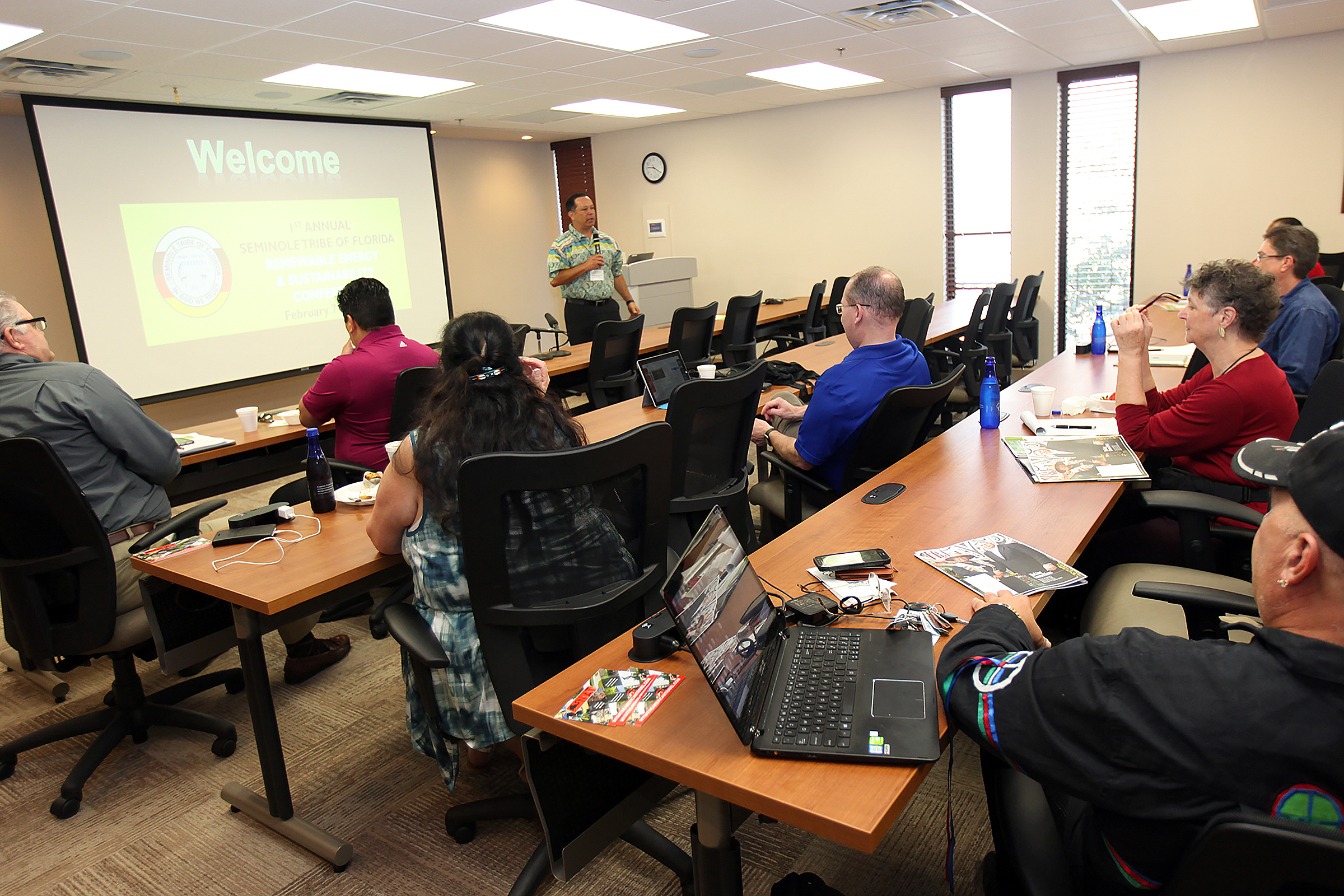 “We really learned a lot here,” Camp-Horinek told Chairman Marcellus W. Osceola Jr., Chairman’s Office Special Projects Administrator Cicero Osceola and attendees Feb. 9, the final day of the three-day conference at the Native Learning Center in Hollywood.  “I’ve got a lot to take home to my people and I want to thank you and your committee for putting this together because some really strong information came through that I think we’ll be able to utilize. We live in an area that is really impacted by the extractive industry and fracking is a real, real problem.”

Camp-Horinek said fracking has resulted in thousands of earthquakes in the Oklahoma and fish kills on a river that runs through the Ponca reservation. Last year the Ponca passed a Rights of Nature statute as protection for its ecosystems, including wildlife. She suggested the Seminole Tribe consider a Rights of Nature measure.

“It is an added layer of protection on tribal lands,” she said.

The conference, which is expected to be an annual event, brought together dozens of tribal personnel from throughout Indian Country – including STOF officials and employees – as well as representatives from the U.S. government, private business and utilities, including Florida Power & Light. Several topics centered on alternative and renewable energy and economic sustainability.

“This is the way the world is going,” Chairman Osceola told the group. “It’s no longer going to be natural gas or fossil fuels. We’re going to start moving into something else. We’re stewards of the land so we want to preserve that land and not keep digging up and fracking and mining, whatever the case may be. So this is the way of the world, the way we are going, to save ourselves. So if it’s us that has to push that, we’re more than happy to do that and we’re more than happy to have everybody jump on board with us, or we follow them. Whatever the case may be; we don’t have to take the lead. We just want to make sure that wherever we’re going we all get there together, and that’s the purpose of these conferences.”

Chairman Osceola said the Tribe recently began to delve into looking at the alternative and renewable energy sectors. 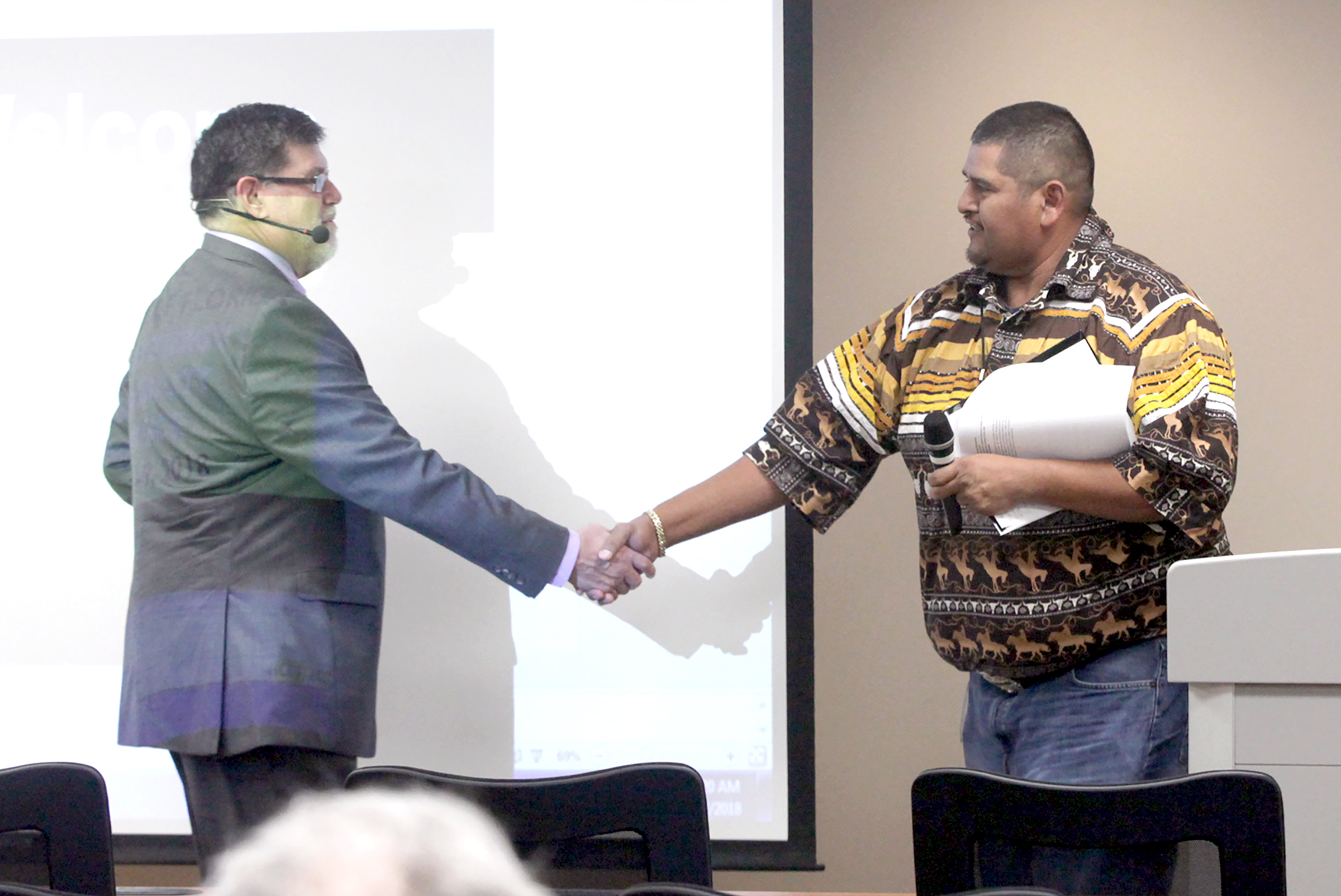 Last fall the Seneca Nation of Indians in New York completed a $3.4 million solar array, which can produce 1.9 megawatts of electricity, enough to power more than 200 homes.

“We believe that investing in renewable energy is an investment in the overall health of the Seneca people,” Seneca Nation President Todd Gates said in a press release at the time. “Through these important initiatives we are able to provide our residents clean, affordable energy, while also moving the Nation away from environmentally harmful fossil fuels, and closer to our vision for self-reliance and energy independence.”

Solar is the best fit in Florida, Chairman Osceola said, but he reiterated that helping Indian Country in other areas, too,  – such as through conferences – is a primary objective.

“We’re here to help each other, to pursue that dream of being self-determination, self-sufficient, self-reliant,” Chairman Osceola said.

The Chairman added that he hopes the attendees will spread the word at other conferences about the Seminole Tribe’s intentions.

“We just want to do our little part, our two cents, to pursue this on behalf of all Native Americans and their tribes to help and enrich and preserve our culture because that’s what this all about,” he said. “We’re trying to find ways to help preserve ourselves because there’s nobody else out there that’s going to do it for us; we have to do it ourselves.”

Solar energy is more prevalent in Southwest states and California compared to Florida, but Matt Valle, vice president of FPL Development, said the Sunshine State will catch up to those states – with the exception of California – very soon.

“Florida is going to go through exponential growth in solar in the next couple years,” Valle said during his presentation on the second day of the conference.

FPL announced at the start of 2018  that four of its new solar energy centers began powering customers in Alachua, DeSoto, Indian River and Putnam counties on Jan. 1. FPL also said four additional centers – one of which is close to the Big Cypress Reservation in Hendry County – would enter service by March 1.

Stephen Manydeeds, from the energy and mineral development arm of the U.S. Department of the Interior Indian Affairs’ Indian Energy and Economic Development, explained to the group on the conference’s opening day that assistance through the department is available to tribes interested in pursuing areas such as renewable energy, conventional energy or minerals. Business development, grant programs and technical services are also provided.

“Our job is if you want to develop this resource, how can we help you bring it online economically,” Manydeeds, a member of the Standing Rock Sioux Tribe, said in his presentation.  “We only deal specifically with Indian lands.”

Manydeeds said energy and minerals is the number two business in Indian Country, trailing only gambling and casinos.

Using solar power as an example, Manydeeds offered rhetorical questions to the attendees whose tribes might consider that route.

“Do you want this to be part of the tribe or do you want it be an LLC?”

“How do you protect your assets?”

“Does this make sense for the tribe?”

If a tribe believes it makes sense, then there are other considerations.

“You are sovereign nations. You should sit down and think about what kind of codes you want to manage resources or industry on your reservation,” he said.

Some examples of successful energy endeavors, he said, included the Cherokees in North Carolina getting paid to haul away plastic waste from a nearby company that makes car dashboards and then turning that waste into diesel fuel. He also highlighted the Choctaw’s efforts in Mississippi that uses wood waste to help fuel a plant.

“What’s great about it is they are all economically viable projects,” he said.

One recurring theme echoed during the conference is that economic viability can go a long way toward energy independence.

“You want to sit down and say, ‘We’re a tribe. We should control our own destiny. We want to develop our energy on our reservation. This is what we want to do. We want to be in control of how we develop our resources’,” Manydeeds said.