Dennis Banks, a revered Native American activist of the 20th and 21st centuries, passed away at age 80 on Oct. 29. A member of the Ojibwa Tribe, Banks was laid to rest where he was born in 1937, at the Leech Lake Reservation in Minnesota.

Banks died from pneumonia he contracted after open heart surgery. His children and grandchildren announced his passing on his Facebook page:

“Our father Dennis J. Banks started his journey to the spirit world at 10:10 p.m. on Oct. 29, 2017. As he took his last breaths, Minoh sang him four songs for his journey. All the family who were present prayed over him and said our individual goodbyes. Then we proudly sang him the AIM song as his final send off.”

Banks visited the Big Cypress and Hollywood reservations in June 2016 while he was leading the 3,600-mile Longest Walk 5 from California to Washington D.C. to raise awareness about substance abuse and domestic violence in Indian Country.

“Dennis Banks was a popular leader who fought for Native American rights, but he was unpopular outside of Indian Country,” said President Mitchell Cypress, who met with Banks in Big Cypress. “I was proud of him. We lost a great man and leader. He left this earth and I don’t know what he is going to start up there, but I’m sure it will be powerful. We have to carry on his message.”

In 1968, Banks co-founded the American Indian Movement with Russell Means to challenge the U.S. government’s exploitation of Native Americans. The group’s protests included a takeover of Alcatraz and the occupation of the Bureau of Indian Affairs building in Washington D.C. The 1973 71-day siege of Wounded Knee, where the U.S. Army slaughtered more than 250 Lakota Sioux in 1890, brought attention to the movement and cemented its place in history. 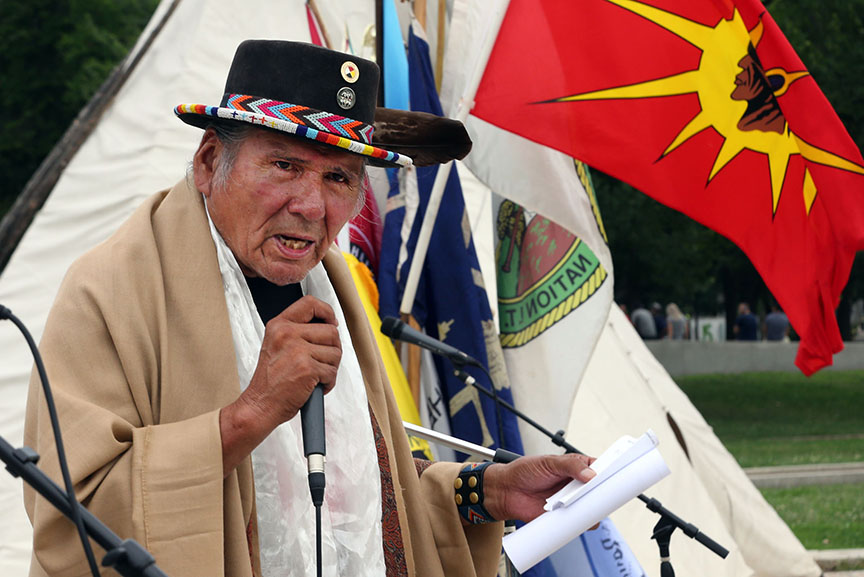 “His influence helped change America’s concept of Native Americans forever,” said Banks’ son-in-law Paul Collins during an address at a behavioral center earlier this year. “With the formation of AIM, the leaders and members brought to the forefront the massive abuse towards Native Americans. I first met Dennis when I was living on the Pine Ridge reservation and the Siege at Wounded Knee began. The world was watching and AIM was commanding their attention. The actions they took and the sacrifice they and other advocates made have given Native Americans the many opportunities that exist today.”

Banks and AIM also created the Longest Walk in 1978 to protest bills before Congress that would have eliminated all treaties between the U.S. government and tribal nations. By the time they reached Washington D.C., the one million signatures they gathered along the way were enough to prevent the bills from passing.

Since then, the cross-country Longest Walks took on other issues facing Indian Country, including one in 2008 to call attention to the importance of protecting sacred sites on tribal lands, in 2011 to reverse diabetes in Indian Country and in 2014 to educate Americans about the history of removing Native Americans from tribal homelands.

Former Hollywood Board Representative Steve Osceola, along with President Cypress, was instrumental in bringing Banks and the Longest Walk 5 to Hollywood and Big Cypress. Osceola was impressed by Banks’ accomplishments on behalf of Indian Country.

“He used his notoriety to take on issues for his tribe and others across the country,” Osceola said. “I was inspired by his dedication, beliefs and standing. He was always an Indian first, before anything else. He was also a father, a leader and wanted to help his people. He didn’t do it for a paycheck; he just did it for what was right in his heart.”

Ray St. Clair, who walked across the country with Banks four times since 2008, was a close friend. When they met 18 years ago, St. Clair was intimidated by the co-founder of AIM until they 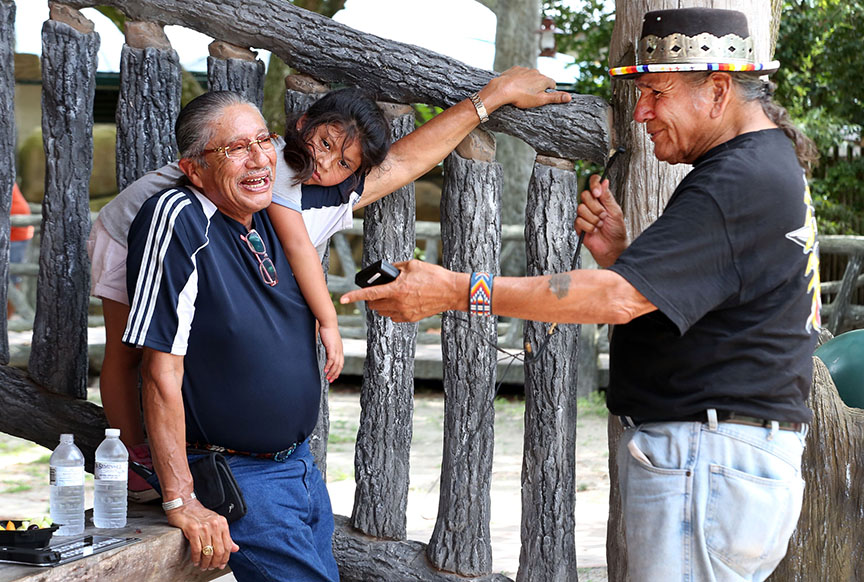 started talking and all those barriers came down.

“He was just easy to talk to,” St. Clair said. “He truly believed in one planet, one people. Now I’m just a branch of his tree and carrying on his teachings. It was a privilege and an honor to be his friend.”

A team of people worked together to bring the Longest Walks to life, including his daughter Carol Collins, who was at Banks’ side when he passed.

“The Seminole Tribe was super gracious at a time when the walk was exhausted and they needed a break,” Carol Collins said. “They showed him a lot of respect and he was really proud of that moment. People didn’t always treat him with respect; they saw him as that radical from the ‘70s. The walks were all about making change in a peaceful and united way.”

Substance abuse and domestic violence were close to Banks’ heart and home. He lost a granddaughter to violence and witnessed the destruction caused by substance abuse in Native American communities nationwide.

“The level of addiction is very deep, deeper than I thought,” Banks said when he was in Big Cypress in June 2016. “We’re in the eye of a monster drug storm and it’s killing our people. All of our cultures are at risk now; the more people we lose, the less there will be to practice our ways.”

The Longest Walk 5 in 2016 was followed in 2017 with the Longest Walk 5.2, which took a more northern route across the country. Longest Walk 5.3 is in the planning stage and will proceed without Banks. Carol Collins said her father’s big concern was who would take over the movement next.

“That’s why he did the walks against drugs,” she said. “If we could address that problem we can totally rebuild our society. When Standing Rock came, he was inspired and comforted knowing there were all those people who were ready to take the helm.”

Banks spread his activism around. In an interview with Native News Online editor Levi Rickert in 2009, Banks was asked if there would ever again be something like AIM’s 10-week siege at Wounded Knee. He said yes, but next time it will be about water.

Seven years later, his prophetic words came true. The Standing Rock protest against the Dakota Access Pipeline lasted about 10 months and Banks was there on numerous occasions. Collins said he couldn’t wait to get back to Standing Rock.

“Nationhood was forming, it was beautiful,” Banks said. “I have never seen such a gathering of people coming together, within weeks it was no longer an encampment it was a community.”

Banks spent a lot of time in hospitals this year, but didn’t allow that to slow him down. After the completion of the Longest Walk 5.2 in July, he attended the Sun Dance ceremony in Michigan.

“He just kept going and going,” Carol Collins said. “During one hospital stay, a nurse told me he was a very gentle man. I said, yeah, that’s him.”

When the Longest Walk 5.3, which he helped organize, reaches Washington in July 2018, there will be a celebration of Banks’ life.

“He was such a beautiful example of appreciating every human being for what they are; something we should all strive for,” Carol Collins said. “His accomplishments made him proud and we will continue to honor his vision and mission.”

When his health was ailing, Carol Collins asked her father if they should put all the projects aside.

“He looked at me, almost shocked that I would say such a thing, and said keep moving,” she said. “He sacrificed so much for a more just world. His inspiration spread to almost everyone he encountered. I will miss my early morning calls, his chanting, and his wisdom. I will miss his wise remarks and silly jokes. I will always treasure his love, his trust in me and knowing that we were always there for each other.”

Since Banks’ visit, Osceola remained a friend and saw him whenever he came to Florida, which he did a few times. Another visit was planned for February 2018.

“He loved the Seminole tribe,” said St. Clair, who was with Banks each time he visited. “His gift was the love for people.”

St. Clair said people came from all over, including Tokyo and Europe for the funeral.

“My heart sank when I heard he passed,” Osceola said. “He lived a hard life and certainly won’t be forgotten. He left a large legacy.”