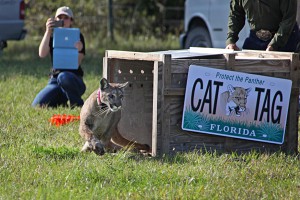 HENDRY COUNTY — The young panther was hesitant to leave the familiarity of her crate for the unknown wilderness of Big Cypress after a long day of travel from north Florida to the Everglades March 10. After a minute, the rehabilitated cat realized freedom was hers; she slowly emerged and took off running toward a cypress pond in the distance.

She was gone in a flash, nearly a year after sustaining multiple injuries likely from a car collision.

Last May, a homeowner noticed the then-9-month-old kitten hiding in bushes, injured, and alerted the Florida Fish and Wildlife Conservation Commission (FWC). The FWC brought her to the Animal Specialty Hospital of Florida in Naples where she underwent surgery on her fractured leg, fractured ribs and bruised lung.

The panther was then taken to the White Oak Conservation Center in Yulee, Fla., where she was nursed back to health in a 10-acre natural enclosure with minimal human contact.

The healthy cat was released back into the wild by the FWC near the Big Cypress Reservation in front of a crowd of well-wishers who included FWC Commissioner Ron Bergeron, Florida Attorney General Pam Bondi and musician John Anderson.

“I’m honored to release it into the wild,” Bergeron said. “It’s a great day for the Florida panther.”

The panther was set free on Bergeron’s 750-acre Green Glades West Ranch, which borders the Big Cypress Reservation. Because female panthers require about 50 square miles for a home range in which to hunt, live and raise kittens, the panther will likely cross the boundary into the reservation.

“Female panthers are more readily accepted into a population,” said FWC panther team leader and biologist Darrell Land. “We released her into an area where she will feel at home. And that’s not mere bling she’s wearing around her neck, it’s a radio collar.”

The collar will allow the FWC to track the 90-pound panther’s movements throughout her life, which could be 7 to 10 years or more.

Since the 1980s, the effort to protect and increase the Florida panther population has proven successful, but its habitat has decreased dramatically. Historically, panthers lived in the southeastern U.S. from Arkansas to Florida. Today their range is limited to about 4,000 square miles south of the Caloosahatchee River and inland from the coasts. This range includes portions of Big Cypress and Immokalee Reservations, as well as the parcel of land on the northern border of Big Cypress that Florida Power & Light hopes to develop into a massive power plant.

The FWC wrote a panther recovery plan in 1981 with the objective of preventing extinction. Bergeron said about 30 panthers lived in the wild in the 1980s, but today that figure is estimated to be between 100 and 160.

“We do see panthers out here, so it’s quite a success story,” Bergeron said. “My family has been out here for eight generations and we are honored to be a neighbor of the Seminole Tribe.”

The release of the panther was a moving experience for those who witnessed it.

“I loved when the cat sprinted off; it was magnificent,” said Sam Tommie, who grew up and lives on Big Cypress Reservation. “She was very powerful. It was beautiful to see her run off like that. It is one of the highlights of this year.”

Anderson stood near the crate and sang “Seminole Wind” as the panther was introduced back into her natural habitat.

“It was very special,” said Anderson, who wrote the song in 1990. “The panther is one of the most perfect animals on the North American continent. To see one in the wild is a spiritual thing.”