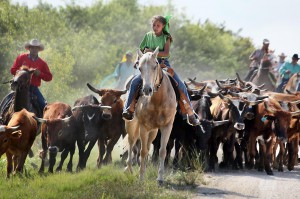 BIG CYPRESS — Steven Yzaguirre rode high in the saddle through Big Cypress Reservation’s vast grazing range under the infinite sky and lived, even for just a few hours, the life of his forefathers.

“This is a memorial tribute to the real cattlemen – the Natives who ran the livestock long before barbed wire. It was 200 to 300 miles of gritty labor,” said Yzaguirre, the great-grandson of Immokalee cattleman John Jimmie, for whom the John Jimmie Memorial Arena is named.

The 9-mile re-enactment included cowboys and cowgirls, work dogs and the family of Honorary Trail Boss “Big” Charlie Osceola, which was represented by daughter Ruth Osceola, son Joe B. Osceola (who took over his father’s ranch), granddaughter Geraldine Osceola and great-granddaughters Jordan, Randean and Randee Osceola and Hortecia Yzaguirre.

Geraldine Osceola, of the Culture Department in Big Cypress, said she felt the presence of her late grandfather from the moment word came that “Big” Charlie was chosen as the Honorary Trail Boss.

“It’s getting us to remember him and talk about him again. It’s like he is with us,” she said.

“Big” Charlie Osceola was a big man – six- foot-plus and nearly 300 pounds – and regarded as a “gentle giant” by all recollection. He owned two horses, tended his cattle diligently, carved wood and loved to cook. His frybread was so impressive that the recipe is handed down through generations. Hint: add sweet creamed corn.

The cattle drive started at Ceremonial Road, snaked past the pastures of Clifton Billie, Richard Bowers, Mary Jene Koenes and others until the midway snack, prayer and speeches on Mondo Tiger’s spread.

Meanwhile, many of today’s Tribal cattle owners were out of the state adding to their herds at the Salacoa Valley Farms cattle sale in Georgia. Jumper said the Seminole Cattle program is the fourth most productive program in the state.

Big Cypress Board Rep. Joe Frank said the annual cattle drive began in 1997 in memory of Junior Cypress, who made his mark not only for cattle work but also for rounding up children from all corners of the reservation and keeping them on the straight and narrow.

“I think the back of his truck saw more children than cattle. Now, today’s cattle owners are the kids of the originals,” Rep. Frank said.

“We do this every day – working cows, out in the hot sun, riding a horse for long hours,” she said. “But I’m not going to lie – today is more leisure than work.”