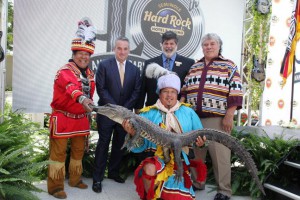 TAMPA — Back in the corner by a chickee-roofed lannai, away from the bustling crowd gathering near the Hard Rock Hotel & Casino Tampa pool, Billy Walker leaned down, waved his hand in front of an upset alligator and deftly put his fingers beneath its snout. Dressed in a blue traditional long shirt, turban and bare feet, Walker brought the beast’s gnarly nostrils up high. The gator hung there, eyes wild, front toes barely touching the ground, unable to move.

Walker then called over his 5-year-old daughter, Shylah, a preschool student in Big Cypress, and directed her to put her little hand in the same place, as he slowly removed his.

Welcome to the pre-show for the 10th anniversary celebration of the Hard Rock Hotel & Casino Tampa.

A crowd of Tribal members, staff, dignitaries and community members assembled beneath a blazing sun March 11 to listen to speeches and toast one of Indian Country’s most notable economic achievements: the growth that transferred the Seminole Tribe of Florida’s humble Sheraton Hotel and Class II Casino into both the sixth-largest casino in the world and the most profitable Class III casino in Indian Country, complete with a 246-room hotel operating year-round at a 98 percent occupancy rate – all in 10 years.

That’s why Walker finally picked up the gator – a traditional Seminole symbol of prosperity – threw it across his shoulders and danced with his daughter behind Tribal Medicine Man Bobby Henry and his family in a colorful call-and-response stomp dance demonstration that began the afternoon’s events.

The celebration was part of a week-long affair, highlighted by a concert and employee giveaways, including a bus trip to Seminole Casino Coconut Creek.

Chairman James E. Billie took the podium and reminisced about the formation of the Tribe’s Tampa Reservation, crediting 144 Indians for the property that became federal trust land in 1980.

He was referring to the accidental unearthing of a forgotten Fort Brooke cemetery discovered during construction of a downtown Tampa parking garage; the remains turned out to be 102 U.S. soldiers and 144 Seminole prisoners, waiting for deportation out West.

In a unique trade-off between the city of Tampa and the Tribe, the Seminoles were re-interred on an 8.5-acre parcel of land in west Tampa near Interstate 4, which today is the Tampa Seminole Indian Reservation.

“I never dreamed it would look like this: one of the best brands in the world, Hard Rock,” Chairman Billie said.

Chairman Billie also paid tribute to Henry and his extended family, who, more than 30 years ago, agreed to vacate their Bradenton village to live on the new Tampa Reservation property. He praised family matriarch Ruby Osceola, who, upon Chairman Billie’s assurance that she could bring her prize pig, gave the final OK for the historic move.

Today the Tampa Seminoles are scattered about eastern Hillsborough County, waiting for a nearby 900-acre tract of land (just across the Polk County line) to be awarded federal trust land status.

When the Polk property becomes an official reservation, most of the original Tampa Seminoles, who now number more than 150, will move there.

“The amazing success that this particular facility has had is truly legendary. It clearly competes with any casino in the world, and it only happens because of John Fontana and the amazing staff here,” Allen said.

The rise was swift. Pushed by Chairman Billie, the Tribe quickly took advantage of its reservation status, opening a museum and village (including a small zoo of Florida birds and animals), alligator pit, smoke shop and a high-stakes bingo hall within two years. Next came a Four Points Sheraton Hotel. Then slot machines and poker tables.

By 2000, the Seminoles had struck a deal with Hard Rock to rebuild the casino, which opened in 2004. Expansion occurred to both the hotel and casino areas in 2007 and 2012, as Vegas-style slot machines and blackjack were added.

Today, according to the Tampa Bay Business Journal, Hard Rock Tampa is the fifth-largest private employer in the seven-county Tampa Bay area. In 2013, it boasted a total economic impact of $592 million.

“This growth doesn’t just happen. It’s leadership. It’s vision, Jim Allen, James Billie and the Tribe,” said John Fontana, president of Hard Rock Tampa. He leads a staff of 3,300 team members. “For the Seminole Tribe to continue to invest in us, to continue to show faith in what we are doing, it’s so much appreciated and I don’t want any Tribal member or leader to ever think that we take this for granted. We are truly, truly thankful.”

To give back to the community, Hard Rock Tampa will donate $100,000 ($10,000 a year for 10 years) each to four Tampa Bay charitable organizations, adding to the more than $10 million Hard Rock Tampa has donated to more than 100 charities since its inception. In fact, for the past three years, six Hillsborough County cultural institutions – Florida Aquarium, Lowry Park Zoo, Museum of Science & Industry, Straz Center, Glazer Children’s Museum and Tampa Bay History Center – have shared about $2 million in Seminole gaming funds.

The four charities honored March 11 were the Bill Edwards Foundation for the Arts, Hands Across the Bay, the DeBartolo Family Foundation and Metropolitan Ministries.

“We want to use our 10th anniversary as a celebration of the property’s successes and accomplishments,” Fontana said. “But, more importantly, we want to give back to show we are extremely grateful for the magnitude of support from Tampa Bay throughout all of these years.”