Skip to content
You are here
Home > Education > Red Ribbon Week emphasizes ‘The future is key, so stay drug free’

With the theme “Your Future is Key, So Stay Drug Free,” Red Ribbon Week focused on the future. From Oct. 17 to 24, community members gathered Tribal-wide to share this message and promote a healthier future for Tribal youth.

As the future of the Tribe incubates in its youth, relaying the message that living a drug-free life is far better than suffering the scourge of substance abuse was of utmost importance. A little fun thrown in for good measure helped the message meet its mark.

The Red Ribbon campaign and the tradition of displaying Red Ribbons as a symbol of intolerance of drug use began in 1985 after the murder of DEA agent Enrique (Kiki) Camarena in Mexico City. Since then, the week has been commemorated in schools and communities nationwide. The Tribe started taking part in the national effort approximately 10 years ago.

“We want to promote life and show kids there’s a good, clean way to have fun without drugs,” said Bernard Colman, aftercare prevention coordinator at the Center for Behavioral Health

The annual Brighton Red Ribbon march Oct. 17 included community members and the entire student body, teachers and staff at the Pemayetv Emahakv Charter School. Dressed in red, hundreds of walkers took to the streets to show solidarity in the fight against drugs. The youngest students — including those in the PECS language immersion program, pre-kindergarten and kindergarten — rode in style on decorated floats.

“There’s an enemy out there called illegal drugs,” said Brighton Councilman Andrew J. Bowers Jr. “It’s up to all of us to fight that enemy including teachers, parents and Council. We’re all in this fight together and we’re not going to let it whip us.”

Most PECS students donned fanciful hats, as it was hat day at school. The fun activities during the week were meant to increase students’ awareness of drugs.

“This is all set up to get them thinking about saying no to drugs and that they have choices,” said Principal Brian Greseth. “Hopefully they will make the right ones.”

The younger generations kicked off Red Ribbon Week in Hollywood with a march led by preschoolers and their families on Oct. 23. Approximately 60 people sported red clothing and balloons while they walked, strolled and skipped around the reservation to support the drug-free endeavor.

“The whole thing is to help people make the choice to stay away from drugs,” Colman said. “This is a really prevalent issue with the Tribe and we want to be upfront and lead the way to promoting prevention activities and healthy choices.”

The rest of the week consisted of a health care screening sponsored by Fire Rescue, which included blood pressure, glucose, oxygen and pulse exams, and a youth basketball tournament and dinner. Perhaps the most exciting event for many of the children was the Red Ribbon Week Game Show hosted by the Hollywood Boys and Girls Club.

The game show resembled Nickelodeon’s “Double Dare” television show, in which two teams competed for prizes by answering trivia questions and completing challenges. The teams, Raging Bulls and The Panthers, were comprised of Boys and Girls Club members between the ages of 5 and 10. Approximately 15 kids participated, answering questions related to Seminole culture, Red Ribbon Week and school subjects. If both teams missed a question or tied, they had to complete challenges, which included bean bag tosses, a mummy wrapping contest, a pie in the face game, and a healthy meal planning race.

The game show was a close call, but The Panthers ultimately prevailed. The game ended on a sweet note, however, with slices of Red Ribbon Week cake and better knowledge of the week’s purpose.

The annual Red Ribbon Parade in Big Cypress Oct. 24 brought employees and tribal members together as 12 departments paraded down Josie Billie Highway in decorated floats, trucks, ATVs, convertibles and tricycles. What seemed like tons of candy was thrown from the floats, to the delight of the Ahfachkee School students who scrambled for it as it came their way. Although the skies threatened a downpour, the event was spared a soaking.

Emcee Fred Mullins kept the crowd entertained as the procession made its way from the Ah-Tah-Thi-Ki Museum parking lot to the school. Clipboards in hand, five Center for Behavioral Health employees took on the role of judges during the parade. 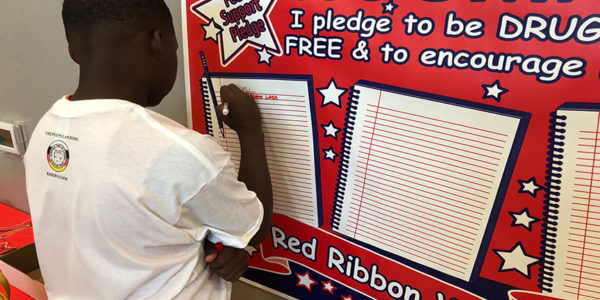 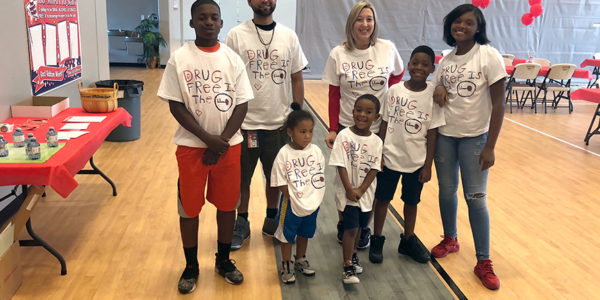 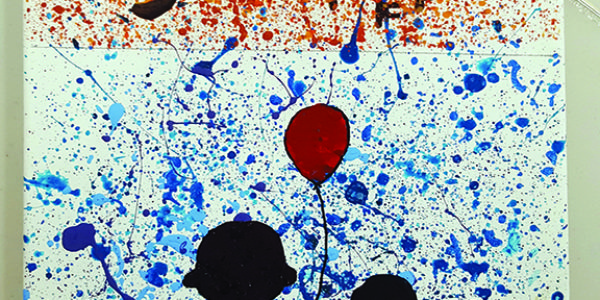 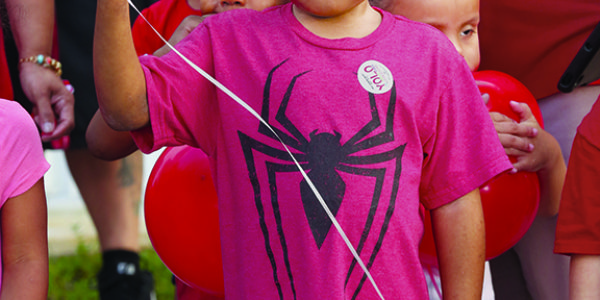 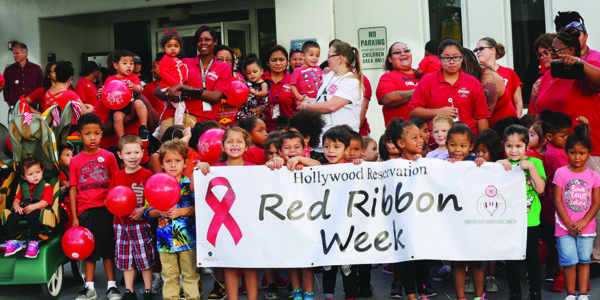 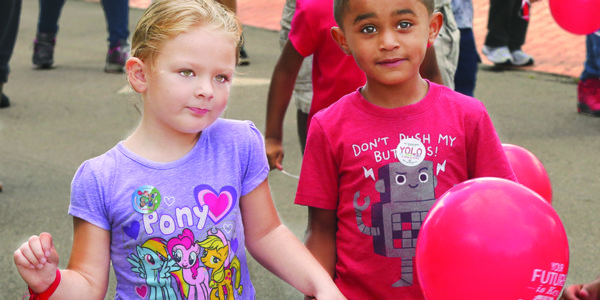 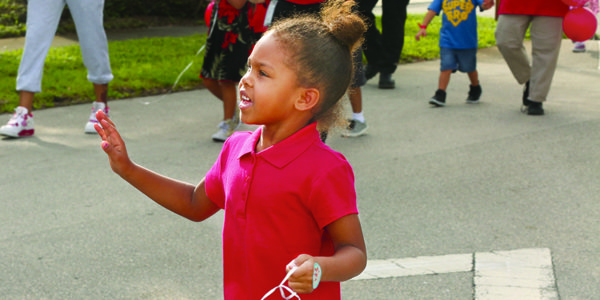 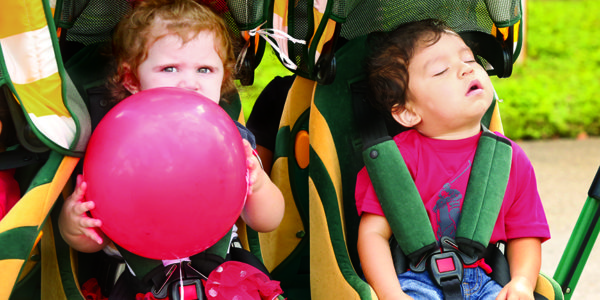 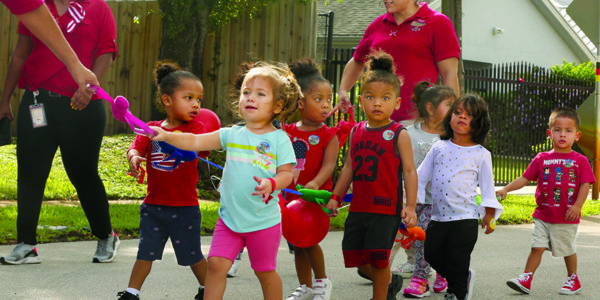 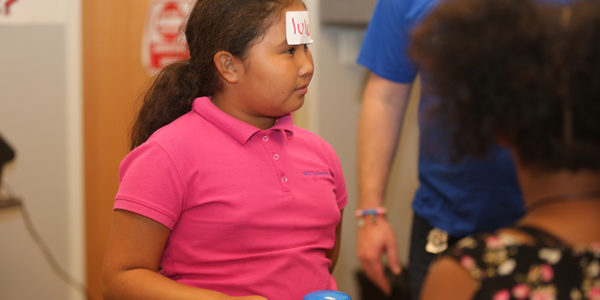 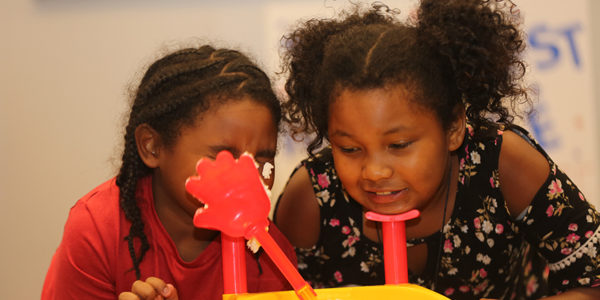 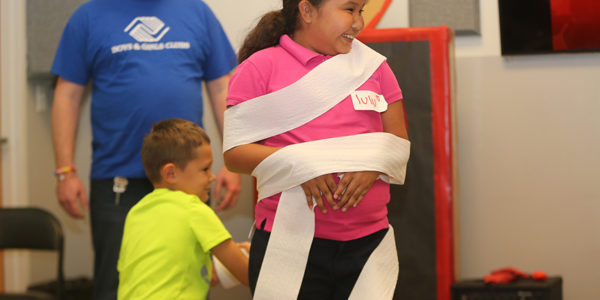 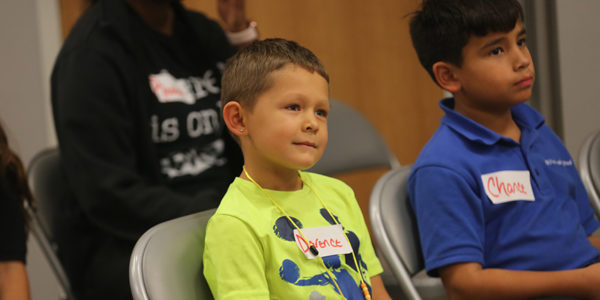 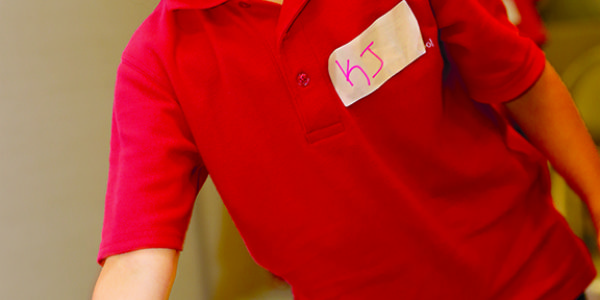 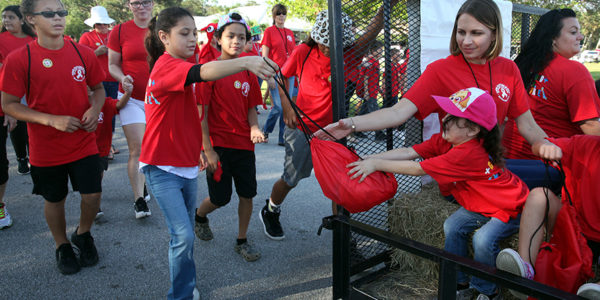 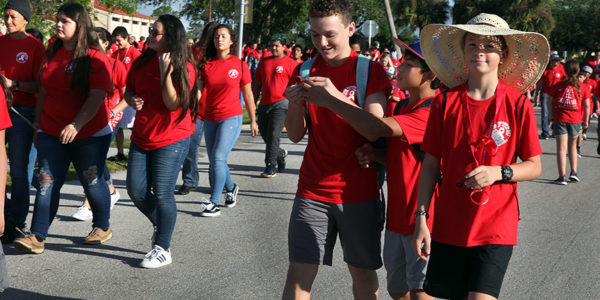 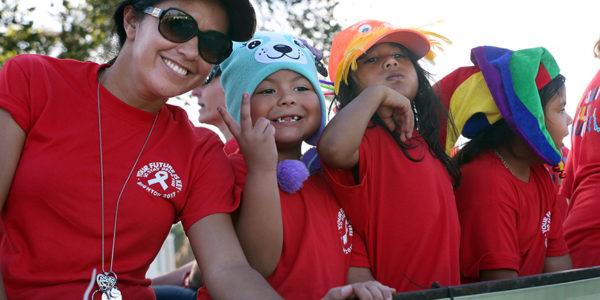 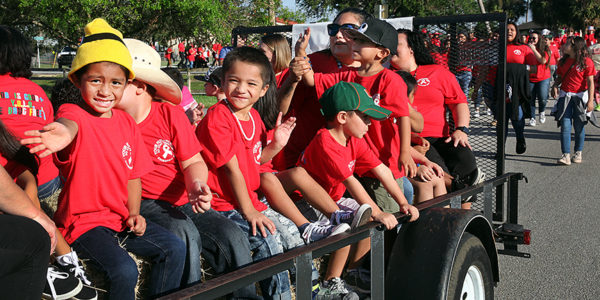 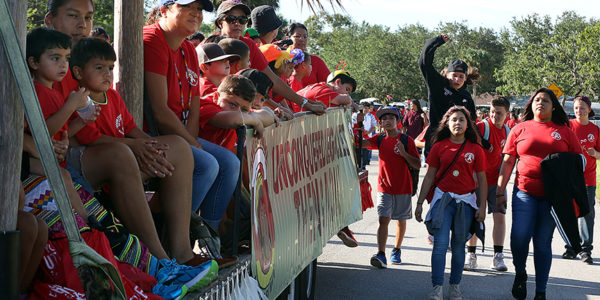 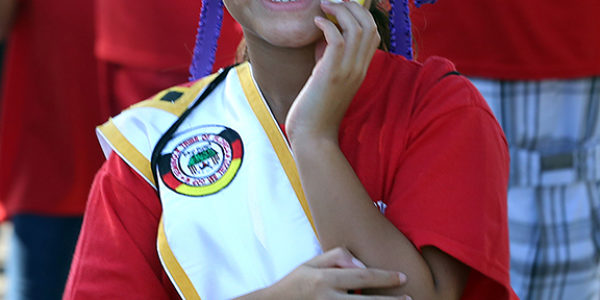