BRIGHTON — Smutgrass is the bane of cattle ranchers throughout Florida, who spend a lot of money trying to eradicate it. The invasive grass, originally from Asia, has a strong foothold in Tribal pastures in Big Cypress and Brighton.

Aaron Stam, federally-recognized Tribal extension program agent, knows that most ranchers, academics and the federal conservation service are focused on killing the weed, but he believes managing it can be profitable for the Tribe. He is working to prove his theory through a competitive rotational gr

“Smutgrass is very good forage if it is managed properly,” Stam said. “It’s like a banana farmer who doesn’t let the bananas go rotten on the trees; they pick them before that. Smutgrass is the same way in that we have to have cows eating it before it gets unpalatable and unable to be eaten.”

Competitive rotational grazing places more cows on smaller pastures to promote grazing while the smutgrass is young, tender and nutritious. When smutgrass grows to maturity it produces a seed head with no nutritional value, only fiber. When young, it has its highest crude protein and total digestible nutrients. The cows are moved from paddock to paddock so they always eat 21- to 28-day-old grass, the optimal time to grab all the nutrition.

“It grows back great in high volume and has close to, if not better, nutrition than Bahia grass,” Stam said. “It’s a weed and grows like one, so we are just taking those characteristics and putting them to work for us.”

The 20-acre Brighton parcel is divided into four, five-acre paddocks; 36 heifers are rotated to a new one every seven days. The normal stocking density for that amount of cows is 110 acres. Stam believes there has never been a field trial like this done in Florida.

Natural Resource Director Alex Johns is pleased with the trial so far and said it is going as they predicted. He and Stam believe it will take about two and a half years to fully know the results of the study.

“This trial is different because no one does this kind of research,” Johns said. “Everybody uses the grass but they also try to kill it. It’s so expensive to eradicate it so people try to manage around it. He [Stam] has the land stocked extremely heavy. Time will tell.”

Johns thinks the study can help the Tribe increase stocking density. He believes they will find out they can run double the cattle and eventually profit more per acre, or find out that it is possible to over graze smutgrass. Either way, he believes the results will be useful.

Most academic and professional articles about smutgrass describe how to kill the invasive weed, not how to use it. Most call it unpalatable to cattle, which Stam is proving to be incorrect; his heifers eat it voraciously.

“We are three months in and it’s been very promising,” Stam said. “These 36 heifers can’t eat all the grass that’s being grown right now. That’s an exciting thing to us. It means we can add more cows on fewer acres.”

Smutgrass thrives in subtropical Florida and is here to stay. The Tribe has been battling smutgrass for years and spends a lot of money to get rid of it, but Stam believes if it is managed properly, it will be great for cows and the bottom line.

The University of Florida’s Institute of Food and Agricultural Sciences refers to smutgrass as the state’s most problematic weed; however, in a 2015 article it stated that although mature smutgrass plants are unpalatable to livestock, regrowth of smutgrass is similar in quality to Bahia grass, a heat-tolerant grass typically used for Florida cattle, and can be grazed for two or three weeks.

Stam said getting cows to eat smutgrass and the other weeds, like dollar and broadleaf weed, which they normally don’t consume due to their bitter taste, is like getting a child to eat healthy food instead of just “pudding and pizza.”

“We know we can make cows eat it even if they don’t want to,” he said. “That’s where the competitive side of it comes in. Once they get in an environment where they are competitively eating and the other cows around them have their heads down and going, they will eat those weeds.”

There is a cost to competitive rotational grazing, but it isn’t more expensive than other methods. By feeding the animals weeds, as well as a molasses supplement and minerals, the Tribe can save money. The biggest cost is the infrastructure of fencing, water and shade structures if necessary. It also takes more labor to move the cows every seven days instead of every two weeks.

“It’s a farmer mentality,” Stam said. “You have to manage those animals and make sure they aren’t running out of water and be hands on with them.”

Stam believes it will also improve soil quality. His theory is that as cows eat and digest smutgrass with high protein, nitrogen returns to smaller areas in soil. This will fertilize the grass and make it more nutritious. Competitive rotational grazing will also allow ranchers to make management decisions for land not being grazed, by adding cows or using it for something else, and increase overall profitability.

An Iowa native who grew up on a dairy farm, Stam didn’t know much about smutgrass. He had a lot to learn when he moved to Florida four years ago. Since it is so prevalent in Big Cypress and Brighton pastures, he believes managing it for forage could be the long-term answer and turn smutgrass from a problem into a resource.

Stam also believes if competitive rotational grazing proves successful, it will give more people without the means to purchase large amount of acreage the ability to go into ranching.

“I’m not a landowner and will never be able to buy 1,000 acres, but I may be able to lease 20 to 40 acres and have a reasonable herd,” he said. “The idea that this could make cattle ranching more accessible to someone like me is very exciting.”

The real measurement of the trial’s success will be based on conception rate, weaned calf crop and weaning weight. Johns doesn’t expect to have those results for two or three years.

“You want to get your first calf and see what the breed back is for a second calf,” Johns said. “Usually the second one is the hardest time for a cow to breed, since it has to gain all that weight back to breed again.”

Stam is “tickled” to work with the Tribe and have the opportunity to conduct the field trial. Johns is looking forward to knowing what the sustainable number of cows is to manage the grass as forage.

“It takes a different mentality to manage an operation like this,” Johns said. “Most people think he’s crazy to fertilize and grow smutgrass while everyone else is trying to kill it. The unique thing about us is we have the resources to do this kind of trial work and think outside of the box. I’ve been blessed with out of the box thinkers on my staff.” 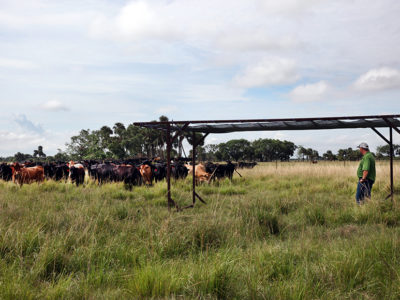 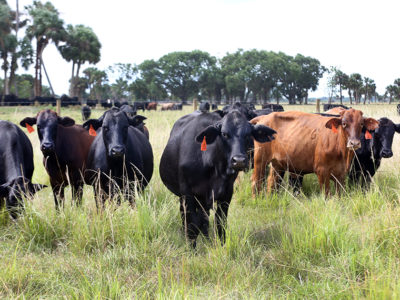 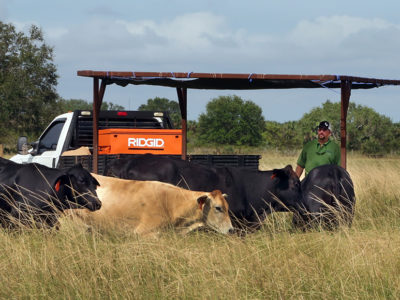 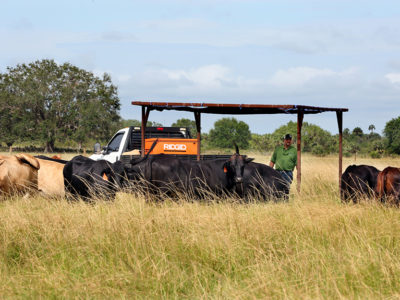 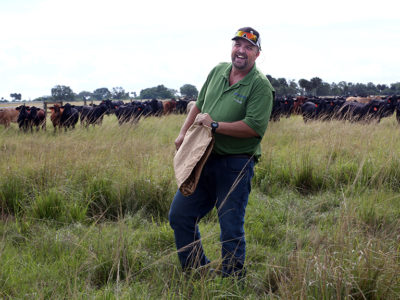