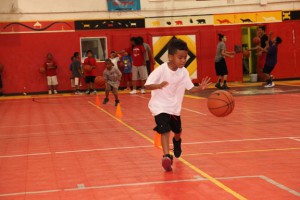 Recreation has always been important to Tribal culture; athleticism and competition are common aspects of daily life.

To encourage participation in athletics, the Recreation Department offers a variety of sports programs, and for the New Year, the department has enacted Tribalwide policy changes. Called Seminole Way to Play, the changes affect youth sports participation criteria, travel regulations, drug policies and more. Youth will also have more opportunities to hone skills in a variety of sports and participate in Tribal leagues on a weekly basis, so they benefit from the camaraderie athletics provide.

“One of the goals is to get Tribal kids to stay on the reservations for sports,” said Richard Blankenship, director of Recreation. “We want the youth on the rezzes to get together to meet, compete and form lasting bonds.”

Approved by Tribal Council in November, the new polices include significant changes to participation criteria. To be on a youth team, a player must have a 2.0 grade point average, have a good standing with the school – including not being on suspension or probation – and have no truancy issues. Further, all participants must comply with the Tribal drug-free policy, which includes a drug test every 90 days for everyone ages 10 to 54.

Other changes include what comprises a Tribal team; the new policy requires the team to be 80 percent Tribal members. Attendance at 80 percent of planned practices is mandatory to remain on the team roster.

“Historically, kids say they will play on the team and may show up for practice once,” Blankenship said. “Then, they expect to travel and play in the game. Or, they may never get drug tested. We are trying to correct that.”

The travel policy addresses the financial contribution of the Tribe to players. Recreation will fund one non-sanctioned, in-state trip per year and three sanctioned, out-of-state trips per year. Sanctioned events are those sponsored by a Native American organizing body. The previous policy was unlimited, so this is a budget-control measure for the Tribe.

For individuals who want to participate on non-Tribal teams, the Tribe will cover team registration fees for two sports seasons per year. Players may compete in as many Tribal-produced tournaments as they want.

“If we do our job right, more kids will play on Tribal teams,” Blankenship said. “We aren’t trying to restrict involvement; if you play sports on a reservation, you can participate in as many as you want. The Tribe is growing, so we need to make sure the kids born today can have resources to be on a team in five years.”

The policies also include new fees for descendants and non-Tribal community members. A descendant will pay $25 per quarter per child for all Recreation activities. Community members will pay a fee to cover expenses per program.

About 400 youth play on teams each year. Recreation wants to increase that by 20 percent over the year. The department will add activities, including Tribalwide basketball, softball and baseball leagues, and plans to offer these sports one day per week, year-round, on each reservation. Professional instructors will operate these programs, and they will also train parents to be volunteer coaches to help with the teams. Additionally, the professional coaches will work to get more exposure for high school athletes.

“The kids will see these coaches every week – consistency is important,” Blankenship said. “We want the kids and the parents to get used to adhering to the sports schedules, rain or shine. Sports will be something the kids can depend on.”

Blankenship realizes there could be some fallout from the new policies but is confident it won’t last.

“The immediate result could be a drop in participation, but with the increased programming, that should be short-lived,” he said. “It’s going to take some time, and there will be some bumps in the road. We plan to have information sessions reservation-wide for parents to meet the instructors and get more information on these policies.”