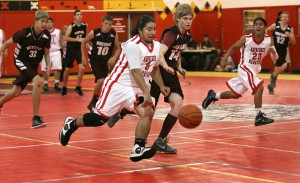 BIG CYPRESS — Despite only being in existence for several years, Ahfachkee’s basketball teams have continued to grow and achieve new heights.

“We’re a young team with only one senior, but we’re exceeding every expectation we had going in to this season,” coach Kristin Stoots said.

On Jan. 8, before the team pounced Community Christian for a 48-29 point win, the Lady Warriors were 5-6 in Florida Division 2A. The 2013 season marks the team’s first official year in any Florida school division.

Senior student Danni Tommie commands the court as the eldest player and team leader. Stoots said the players struggled in the beginning of the inaugural division year with four straight losses, but soon coaching and team cohesion began to make a difference.

“In the beginning our weakness was leadership. Not anymore,” Stoots said. “Danni really stepped up in the last few games.”

The team’s strength is defense. The girls hustle.

“They average a lot of steals per game, and they have learned to anticipate the pass,” Stoots said.

In the Jan. 8 game, Tommie made 11 points, eight steals and five blocks.

Next year already looks sunny for the team. Malari Baker, a junior, made 15 points and eight steals.

Lady Warriors who are still in middle school also play other middle schools. As of Jan. 8, the middle school record was 2-1. Dasani Cypress, a seventh-grader who plays on both the varsity team and middle school team, made 15 points and five steals against Community Christian.

Boys’ basketball is set to grow

Don’t let the small size of most Ahfachkee School’s fledgling boys’ basketball players fool you. The varsity team, in its second-season return to the court, will not lie down.

Led by its only senior and strongest player Tylor Tigertail, the Warriors tenacity against taller, more seasoned teams serves to bolster each player’s love of the game and commitment to win – even down to the final buzzer.

With Tigertail as its anchor, flanked by junior Quenton Cypress and freshman Devon Bowers, the team that consists primarily of middle school students, put on an honorable show of grit on Jan. 8 in a district game against looming, more experienced players from Community Christian.

Through the Community Christian competition, the team’s second season had not yielded a win but team strength continues to grow.

“We expect at least three years before we can even qualify (for district finals),” Big Cypress Councilman Mondo Tiger said.

Tiger, the team’s biggest cheerleader, established the program last year to keep students off the streets, into sports and school, and away from the influence of drugs or alcohol. Only four parents turned out for the first game.

“Now, the stands are packed, and the team is bringing in talented kids. I’m tickled and I’m pleased,” Councilman Tiger said.

“The parents bring the kids in. I just opened the door,” Councilman Tiger said. “It’s catchy and good. That’s what makes you proud. To me, the program is win, win, win.”

The next issue of The Seminole Tribune will include a season wrap-up.