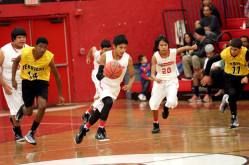 “It feels good to get the first win,” said PECS boys coach Kevin Jackson, whose team upped its record to 1-2. “We did a good job with running our offense and sharing the ball. I was real pleased with our effort defensively.”

Osceola, an eighth-grader, set the tone early with 10 points in the first quarter on his way to a game-high 17-point night that matched Moore Haven’s entire output. Carrillo, a sixth-grader, scored 11 points and Harris contributed six points.

Ball handling is a strength for PECS thanks to the multiple options to run the offense.

“I’ve never really had that luxury before. It makes things a lot easier,” said Jackson, whose team also received eight points from Billy Bailey and two blocks by Dante Thomas on consecutive defensive stops in the second quarter.

PECS ruled the paint in both zones behind Andrew Fish and Robert Harris. The two tallest players on the court started together for the first time this season and made their presence felt by combining for a dozen rebounds. Jackson said Fish, an eighth-grader, is about 6-foot-1 and Harris, a seventh-grader, is about 6-2.

The victory came following a pair of close losses. PECS opened the season with a 49-45 setback against Yearling Middle Dec. 4. Osceola scored 31 points and had six steals. Other scoring came from Aleke Baker with four points and Donovan Harris with three points. Robert Harris, Silas Madrigal and Ramone Baker each had two points.

“I felt like we had too many breakdowns on the defensive end giving up uncontested buckets. We were a little careless with the ball and stagnant at times on the offensive end,” Jackson said.

PECS didn’t dwell on the 0-2 start. It dominated Moore Haven from start to finish.

“Compared to our first game, I feel like we’ve come a long way on the defensive end. We looked a lot better (against Moore Haven), a lot less busted assignments,” Jackson said. “In the second half of the season, hopefully we’ll be an even stronger team than we were (against Moore Haven).”

The depth of the PECS girls basketball team faced a stern test in just its third game.

Already playing without one captain at the start of the game, the Lady Seminoles lost another captain before halftime Dec. 10 against Moore Haven. With Raeley Matthews and Cady Osceola unavailable, PECS coach Tim Thomas turned to his third captain – Aleina Micco – before the start of the third quarter.

“I told her she had to step up,” Thomas said.

Micco did more than just step up. She dominated the third quarter by scoring 11 of PECS’ 13 points to snap an 8-8 halftime tie. Micco finished with a game-high 14 points as PECS upped its record to 2-1 with a 27-21 win.

“Without Raeley and without Cady, we needed her to step up big time. She did a good job,” Thomas said.

Luzana Venzor contributed five points. Haylie Huff and Julia Smith had four points each for PECS, which suffered a setback late in the second quarter when an ankle injury knocked Osceola out of the game.

Osceola, a starting point guard, was injured while going for a loose ball near the stands. The game came to a sudden halt. Osceola had to be carried off the court by Thomas and a referee. After the game resumed, Osceola was placed on a stretcher and brought out to an ambulance by Seminole Fire Rescue but not before she received hugs from her teammates.

The Lady Seminoles’ 21-13 lead after three quarters quickly grew when Venzor hit a 3-pointer to start the fourth quarter. She also made a steal and a layup that gave PECS a 26-15 lead.

A layup by Moore Haven’s Chynna Villarreal cut PECS’ lead to 26-19, but the home team pulled away in the final minutes.

“We have a scrappy team. We scrap to the end,” Thomas said.

PECS opened its season Dec. 4 in impressive fashion with a 37-5 win against Yearling Middle. Micco led the way with 14 points followed by Osceola with 10. Matthews and Alaina Sweat each had four points.

The Lady Seminoles suffered their first loss shortly after some players returned from a field trip to Washington, D.C.

“My girls were just getting back from D.C. and all of them were rusty,” Thomas said about the loss to Clewiston Middle.