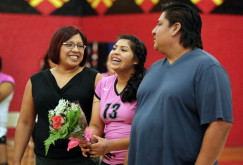 BRIGHTON — Pemayetv Emahakv Charter School’s eighth-grade volleyball players and their parents were honored for their commitments to the sport and the school Oct. 13 at the team’s last home game in Brighton.

“We want to recognize the players and their parents and thank them for all the hard work and dedication to the team,” said principal Brian Greseth.

The volleyball team, which has four eighth-grade players, went on to win the match 2-0 against Osceola Middle School and finished the season undefeated with a victory the following night. It’s been a big year for the girls who will move on to high school next year.

“We’re the oldest and we have to lead and show the younger girls what needs to be done,” said Aleina Micco, 14. “They look up to me.”

“It feels better than being in sixth grade,” added Raeley Matthews, 13. “Now we’re the big dogs.”

Coach Kim Jackson presented each eighth-grader with a bouquet of roses as their parents accompanied them. The parents have relentlessly cheered for their children and the team.

“She is doing what she likes and we are happy just to support her,” said Reina Micco, Aleina’s mother. “She’s one of the leaders of the team and chairman of the Student Council. She’s coming out of her shell.”

The players deservedly feel good about their contributions to the team’s season.

“It feels great to leave the team in good hands,” said Krysta Burton, 13.

“We are leaving with a good record, so they can carry it on next year,” added Cady Osceola, 14.