BARTOW — It doesn’t take long for visitors to the Polk County History Center to realize the significant role Seminoles played in the area.

Located in the Old Polk County Courthouse on East Main Street in the heart of downtown Bartow, the museum features a large glass display case that houses Seminole culture items close to where visitors can begin their tour. The display provides a glimpse of the Seminole culture through patchwork clothing, dolls, beaded items and carved artifacts.

“Florida Seminoles and Miccosukees have been making and wearing patchwork clothing since the early 1900s, creating beautiful and unique patchwork designs. They also made palmetto-husk or pine needle dolls dressed in the same elaborate patchwork clothing. Patchwork was a way for these Native Americans to identify with their heritage.”

Visitors can see a tunic in the display that was given by Charlie Micco, of the Brighton Reservation, to the donor during a hunting trip in 1948. A small photo of Charlie Micco with grandson Fred Smith on horses in 1950 is next to the tunic. 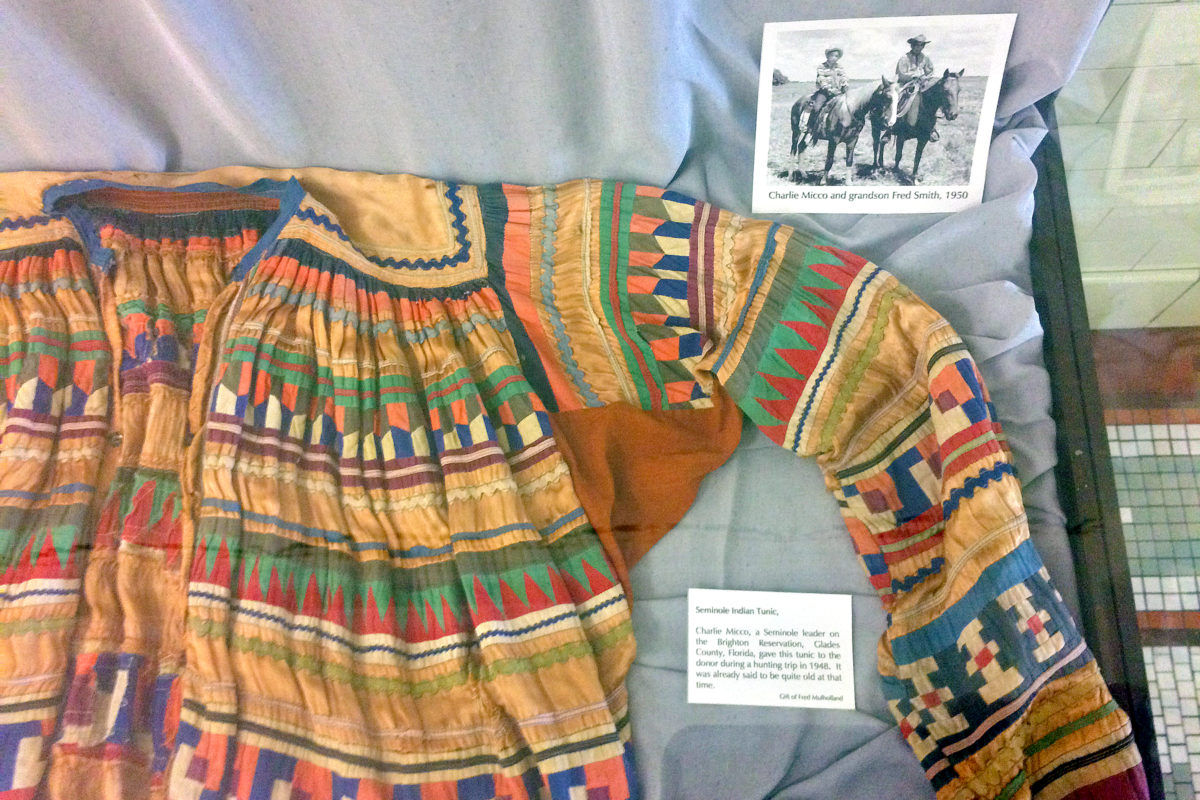 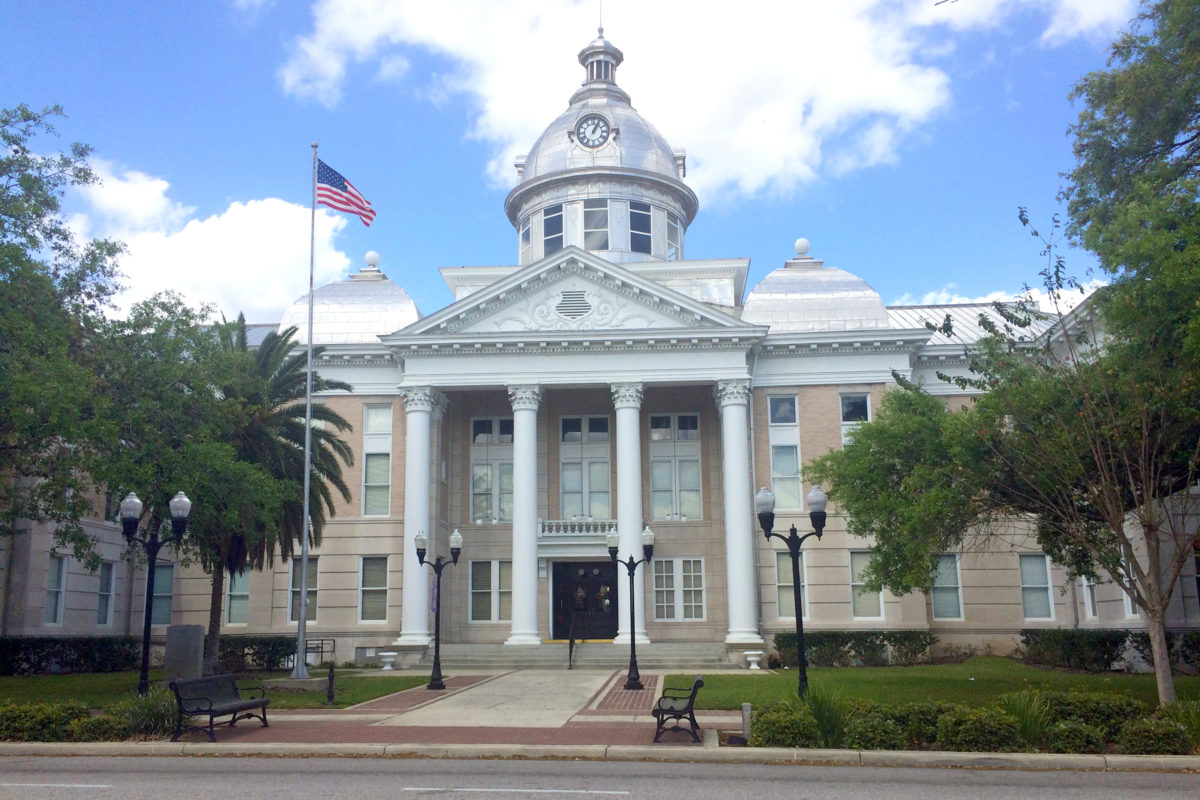 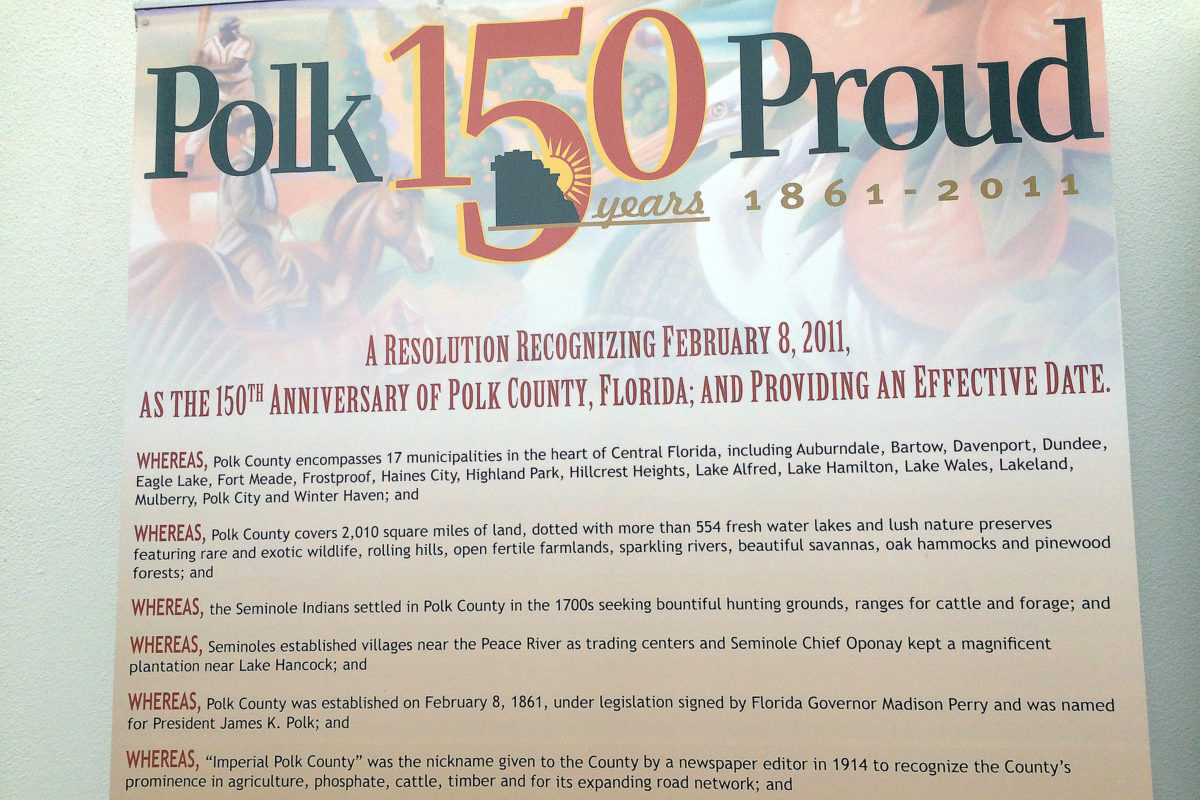 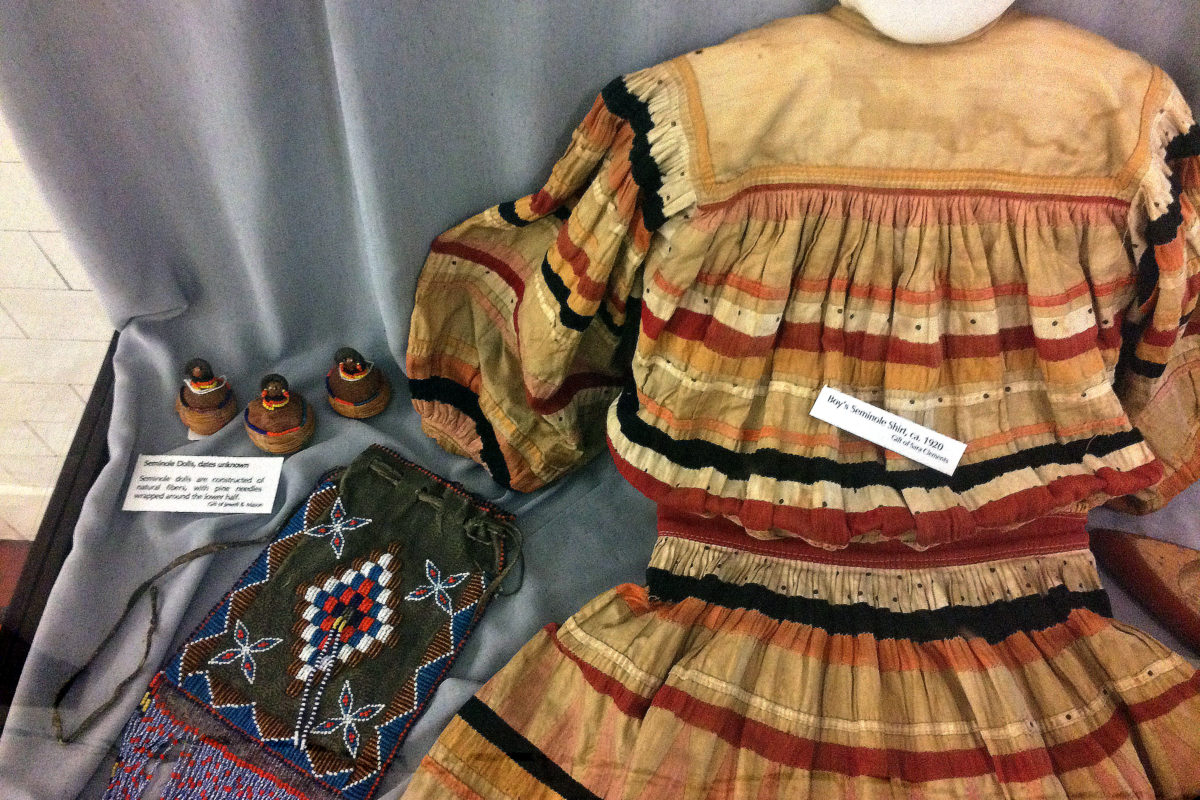 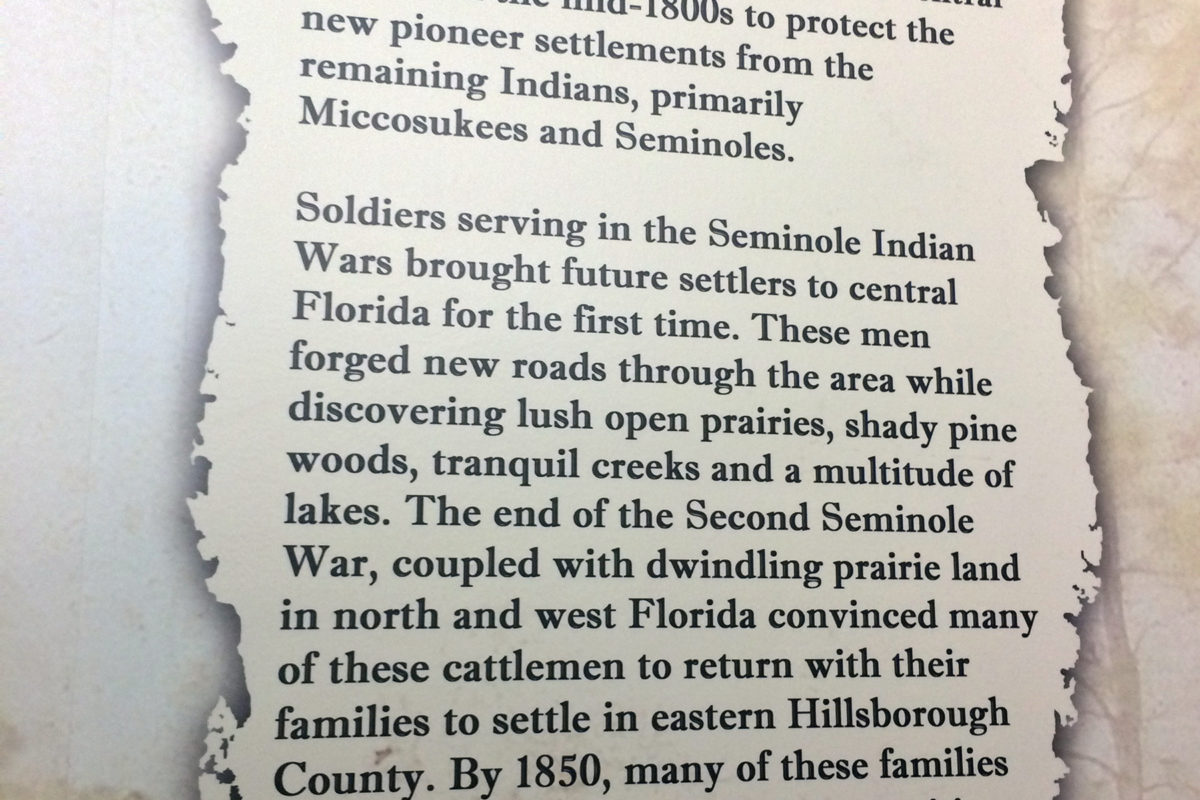 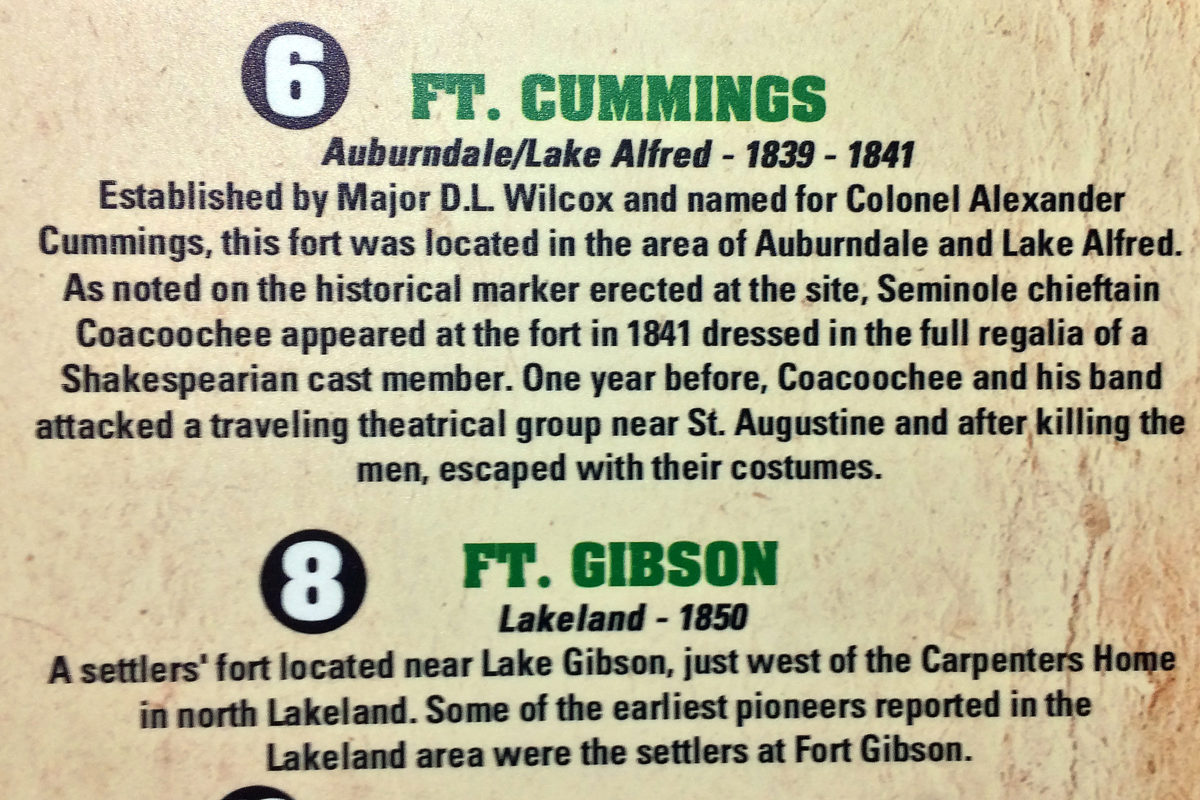 Other exhibits, materials and references related to Seminoles or other Native American tribes are featured throughout the multi-floor museum. There’s a mention about early settlers that “Archaeological evidence shows [Native American tribes] presence in the region at least 1,500 years ahead of the county’s legal formation.”

Visitors can get a close up view of a nearly 17-foot-long dugout canoe dated 400-570 A.D. that was discovered at Weohyakapka Creek between Rosalie and Walk-in-the-Water Lakes in Polk.

A display of free publications includes the glossy, colorful 56-page “Florida Seminole Wars Heritage Trail,” which provides a detailed look at the Wars from each region of Florida. Locations, information, photos and maps of battles, forts, historic markers, museums, and other items are featured throughout the pages as well as stories about prominent Seminole Wars figures such as Osceola, Coacoochee, Billy Bowlegs, Sam Jones, Polly Parker and Black Seminoles.

An area dedicated to the history of slaves in Polk County includes information about runaway slaves who joined Seminole communities and became known as Black Seminoles. An item about the village of Minatti reads:

“Originating from a possible misspelling of Manatee, this settlement was formed around 1818-1820 by former slaves that came to the area with Chief Oponay. Located between Lake Hancock and Bartow, Minatti was destroyed by the U.S. Army in 1836.”

Visitors can learn about 15 forts in Polk County, see their locations on a map and read about how the Seminole Wars played a role in bringing early settlers to the area who helped shape Polk County. Explanations include how the military forts were constructed across central Florida in the mid-1800s “to protect the new pioneer settlements from the remaining Indians, primarily Miccosukees and Seminoles.”

A memorable description for Fort Cummings, in the Auburndale/Lake Alfred area, reads:

“As noted on the historical marker erected on the site, Seminole chieftain Coacoochee appeared at the fort in 1841 dressed in full regalia of a Shakespearian cast member. One year before, Coacoochee and his band attacked a traveling theatrical group near St. Augustine and after killing the men, escaped with their costumes.”

Being “Polk Proud,” as the county’s resolution recognizing its history on its 150th anniversary on Feb. 8, 2011 prominently declares on a tall display, includes mentions of the Seminoles. In fact, the Seminoles appear close to the top, occupying the third and fourth ‘Whereas’ out of 24:

“Whereas, the Seminole Indians settled in Polk County in the 1700s seeking bountiful hunting ground, ranges for cattle and forage; and “Whereas, Seminoles established villages near the Peace River as trading centers and Seminole Chief Oponay kept a magnificent plantation near Lake Hancock.”

The museum also highlights pretty much everything else about Polk County history, including its military heroes, a pristine courtroom, railroads, agriculture, cattle, the phosphate rock industry, company towns, spring training baseball and much more.

The Polk County History Center is located at 100 East Main St., in Bartow. Admission is free. As part of its Lunch and Learn series, a program about the history of the Third Seminole War will be held Nov. 20 by John and Mary Lou Missall. For more information call 863-534-4386.