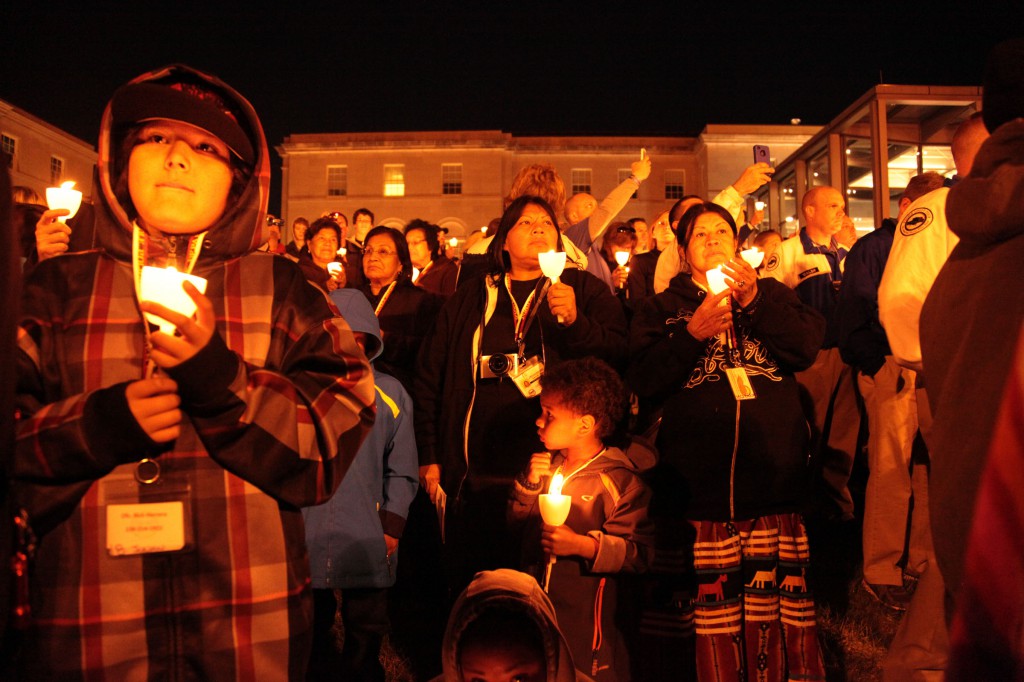 WASHINGTON, D.C. — Ask young kids what they want to be when they grow up and many say police officers. To help kids learn precisely what that entails, the Seminole Police Department sponsors the Police Explorers program to teach them about law enforcement. The culmination of the program each year is a trip to Washington, D.C. to participate in National Police Week.

From May 12-16 a group of more than 150 people including 88 Explorers plus elders, SPD chaperones and family members attended the event, which included the 25th annual Candlelight Vigil for fallen officers, the National Police Memorial March and the National Peace Officers’ Memorial Service on the lawn of the U.S. Capitol.

“It’s an educational week, and we want to enlighten them about what police work is,” SPD Chief William R. Latchford said. “The kids see that the police culture is a brotherhood, and we want to accept them into it. The goal is to take one of these Tribal kids and replace me with him or her.”

This was the third year the Explorers traveled to Police Week and it was the largest trip by far. The number of Explorers participating has nearly tripled from the first year. New activities were added to the agenda, including journal writing and culture classes led by seniors in the evenings, to keep things fresh. Kids wrote their impressions of the trip every day so they could have a record of it and practice their writing skills.

“The program gives them structure and lets them know people around them keep them safe,” Hollywood Councilman Marcellus W. Osceola Jr. said. “I’ll keep my kids involved because it’s a great program.”

The Explorers joined about 15,000 police officers and their families from around the world at the 25th annual Candlelight Vigil at the National Law Enforcement Officers Memorial. Before darkness fell, the kids went to work trading challenge coins and patches with officers from other police departments. The Explorers had five of each to trade as they politely approached uniformed officers on the grounds of the memorial. Patches were easiest to find and were obtained from departments as close as Ocala, Fla. to as far as New South Wales, Australia.

The somber event commemorated those officers killed in the last year; their names were added to the 19,980 others etched on the memorial wall. One SPD officer’s name appears on that wall. Lt. John K. Healy was killed in an automobile accident Feb. 15, 1986 while driving from Tampa to Hollywood. During a severe storm, he lost control of the car and landed in a canal where he drowned. Lt. Healy, 35, served with SPD for 14 years.

Names of fallen officers from years gone by were also added to the wall, including that of John Stout, a U.S. Customs Inspector killed while trying to arrest the notorious pirate Jean Lafitte in Louisiana in 1814.

After speeches by dignitaries that included Attorney General Eric Holder, the crowd lit candles to honor the fallen officers. The solemn glow of tens of thousands of candles lit up the night.

“It was very emotional,” said Tyson Osceola, 14. “A lot of families were there who needed their fathers who died.”

“It was heart touching,” added Dennis Gonzales, 14. “I’m grateful to witness something that spectacular.”

The following day, an SPD police car and Honor Guard were part of the National Police Memorial March for the first time. It was the only Native American police department represented. When the car passed the Seminole crowd, cheers erupted from children and adults alike.

“To see our flag flying amongst everyone else was a very proud moment,” President Tony Sanchez Jr. said.

The magnitude of the event wasn’t lost on the kids either.

“I love that they saw ours,” added Brady Latchford, 13.

The 32nd annual National Peace Officers’ Memorial Service took place on the grounds of the U.S. Capitol with keynote speaker President Barack Obama. Security was tight, but with tens of thousands of uniformed police officers in attendance, it was possibly the safest place in the country. The best seats were reserved for the families of the 143 officers who died last year.

“They all took the oath to protect and serve,” Obama said. “The brave officers we gather to remember today devoted themselves entirely to serve and protect others. The fight against crime is the fight to preserve the quality of our community, which is the root of our greatness. It exemplifies the very idea of citizenship.”

The Explorers made the SPD chaperones proud with their respectful behavior during the trip. One of the goals of the department is to let kids see officers as ordinary people who want to help, support and educate them.

“We are celebrating all they have done through the Explorer program,” said Lt. Lisa Bennis, who organized the week. “We want to give them an enriching and rewarding experience they will remember forever. Through this, they are developing relationships that will go beyond the trip.”

The Explorers program shows the kids what it means to be a police officer. The core essence of SPD is printed on the side of every police car: Caring for your Community.

“Law enforcement is a brotherhood,” Lt. Victor Madrid said. “Once you get into law enforcement, you are in a family for life.”

Chairman James E. Billie, who attended the week with his wife, Maria, and children Eecho and Aubee, was impressed with the organization of the event and the good behavior of the children.

“This program will continue for a long time,” he said. “It is the beginning of being a good citizen.”