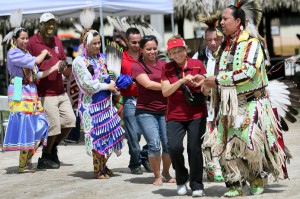 BIG CYPRESS — Observing the past, honoring the present and welcoming the future made a trifecta of cultural fun for people of all ages who turned out May 3-4 for the Big Cypress Reservation’s 117th Anniversary Celebration.

“To be able to wear a traditional Seminole dress and sing the national anthem in front of everyone gives me a chance to share my culture and show how proud I am of it,” said 14-year-old Tori Osceola, who belted out “The Star Spangled Banner” during the opening ceremony.

Tribal members from all reservations, tourists and local residents reveled in the two-day event at the Junior Cypress Rodeo Grounds that highlighted Seminole food, art, jewelry, music and dance. One group, more than 60 members of the Saginaw Chippewa Indian Tribe of Michigan, took a detour from a Miami-based cruise to attend.

Alfie Mandoka, who serves on the Saginaw Chippewa trip committee, said it was a pleasure and a responsibility to spend time with the Seminoles.

“We have over 500 Tribes in Indian Country. If we can visit indigenous peoples where they live then we are there,” Mandoka said. “It’s about exchanging our diverse cultures and visiting our relatives.”

The group came prepared with a handmade blanket stitched in their Tribe’s distinctive floral design to offer Chairman James E. Billie. Before leaving, Mandoka and fellow Saginaw Chippewa Carole Tally wrapped the blanket around the Chairman’s administrator Danny Tommie in a symbol of friendship between the Tribes.

Hosted by Big Cypress Councilman Mondo Tiger and emceed by Tommie, the celebration commemorated the 1896 purchase by the Bureau of Indian Affairs of swamp land that would, combined with land purchased in 1889, become the heart of the Big Cypress Reservation.

Councilman Tiger said the very landscape on which the anniversary event was held, was the scene of bloody skirmishes between Native Americans who stood their ground and U.S. Army troops sent to kill them or force them to reservations out west.

“This was the high ground where our people could easily slip into the Everglades – where soldiers and horses could not reach them,” he said. “That’s how my great-grandmother got here. She was just a girl when she hid with her 1½-year-old brother under a bridge and waited for the soldiers to pass.”

Those were the ancestors “whose skill and craftiness allowed them to survive,” Councilman Tiger said. In 1957 their descendants became the official Seminole Tribe of Florida.

Joseph Billie and Jimmy Cypress were representatives of Big Cypress when the Tribe’s Constitution was signed and the first Tribal election was held on Aug. 21, 1957.

But Native Americans lived in Big Cypress for thousands of years even before the arrival of Ponce De León, of Spain, who took the land in 1513 that would be called Florida. Paul Backhouse, director of the Ah-Tah-Thi-Ki Museum on Big Cypress, said pottery that dates back about 3,000 years ago has been found on the reservation, indicating that indigenous people lived and thrived there.

By the 1800s, according to limited government documentation and historian accounts, the people were named Seminoles by the Spanish and were growing citrus and raising horses and cattle on land just north of Big Cypress.

The community consisted of Native Americans and African American slaves and slave owners. In the early 1820s, however, conflicts began between the U.S. Army seeking runaway slaves and desiring the land for white settlement.

The Treaty of Moultrie Creek, signed in 1823, moved the community further south to where Big Cypress is now. The treaty was short lived when the U.S. government again decided again to force people out for white settlement – this time to be relocated to reservations in Oklahoma.

The Seminoles stood firm and fought back in three major battles costing the U.S. $20 million and thousands of troops.  A plaque on Moses Jumper Jr.’s land in Big Cypress marks the site of one of the fiercest conflicts.

“The government decided to build a fort. We decided to burn it down and send the soldiers running into the woods – if they survived,” Councilman Tiger said.

A census of Florida natives in 1847 listed 120 Indian warriors: 70 Seminole, 30 Mikasuki, 12 Creek, 4 Yuchi and 4 Choctaw. In 1858, after the third major Seminole War, only 150 Indian remained. Among them were decedents also of Calusa, Yamassee, Apalachee, and Timucua, who had been intermarrying for generations.

In 1880, another census by the Bureau of American Ethnology listed 208 Seminole living in five main camps in the swamps and Everglades between Clewiston and Miami. Big Cypress Reservation became official in 1911 but was not dedicated until 1936.

Councilman Tiger said he hopes to stage the Big Cypress 118th Anniversary Celebration in January 2014 to avoid inclement weather possibilities. Also, the headliner concert will be held on Saturday night and a rodeo component will be added.

“We’re going to keep doing this until it becomes annual,” he said. “We’re bringing the Tribal Fair back to Big Cypress.”