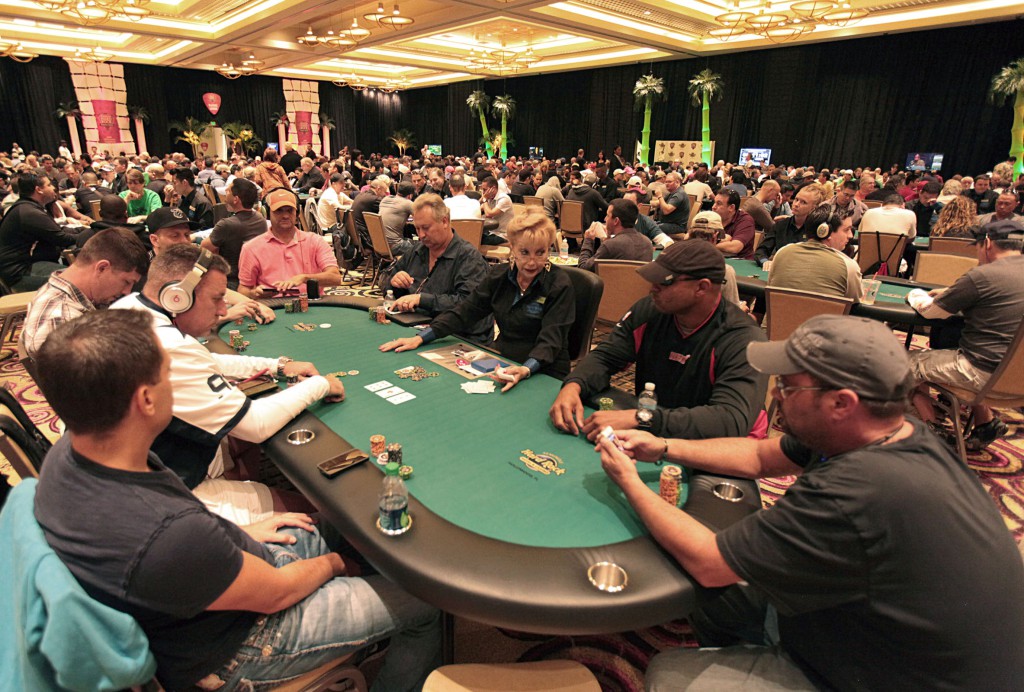 HOLLYWOOD — Poker players from around the globe descended on the Hard Rock Hotel & Casino Hollywood in August for the world’s richest poker tournament. The $10-million guaranteed payout was the largest offered at any tournament worldwide.

The three-week Seminole Hard Rock Poker Open broke Florida records for participation with the first event and broke it again during the sixth event. With 33 events between Aug. 8 and 29, more records were sure to fall. Event seven, a $560 No-Limit Hold’em with a prize pool of nearly $1.7 million, attracted 3,389 players and took four days to complete.

“This is the premier event on the property,” said William Mason, director of poker. “It’s more than just a local tournament; it’s a global tournament.”

The ballroom at the Hard Rock was transformed into a mega-card room with enough tables to seat 760 players and dealers at a time. The room was filled with a quiet intensity; there was little banter between players. Wait staff served food and drinks while a cadre of masseuses offered chair massages to players as they sat at the tables and contemplated their hands.

Buzz for the tournament took off in April with the announcement of the Seminole Hard Rock Poker Open, which was made exclusively on social media.

“Word spread so quickly – Twitter went wild,” Mason said. “That’s all anyone talked about at the World Series of Poker in Las Vegas.”

It was enough to get thousands of players interested in winning a piece of the pie. But for those knocked out of the running, the Hard Rock poker rooms were open for business, lots of business. Players not competing in the tournament flocked to the rooms anyway just to play with the big players, giving Hard Rock a diverse pool. Novices and seasoned players sat side by side, all hoping  to get a lucky break.

“I always have a strategy,” said Larry Kusch, a Florida-based player. “You try to get a little lucky, but you need to have skill and luck. Without both, you don’t win.”

With so much money at stake, players showed up in a multitude of guises and brought a variety of electronic distractions. Most will do almost anything to help avoid a “tell,” a small change in behavior that could give competitors an inkling of a player’s cards. Sunglasses, hoodies and hats were common attire.

Smart phones, tablets and headphones were also popular. One player wore sunglasses and played Candy Crush on his iPad while he played poker on the table. Superstitions were also on display – one player decorated his stack of chips with something that looked like Mickey Mouse lost in “The Nightmare Before Christmas.”

Players were assigned seats and paid a flat fee to play in each of the tournament’s events. The buy-in gave them each the same amount of chips to start play. The chips don’t represent monetary value, so a player can’t cash out during the game.

Players were impressed with the payouts and the structure of the tournament.

“It’s very well organized; the set-up is perfect,” said Vitor Coelho, of Tampa, an experienced player who has competed in two dozen tournaments. “When people lose, they can buy in again.”

Tim Worley and Susie Braman, of Ridgley, Md., have competed in major tournaments together since 2008 and have done well. They prefer not to play at the same table, unless they both make it to the final table of a tournament.

“I got into poker because it was an opportunity to spend time together,” Braman said. “I would rather beat Tim than anyone else in the world, but I don’t have a good track record. I knocked him out of one tournament and it was joyous.”

Coelho said the only way to win is not to be afraid to lose.

“Come play, be positive, be aggressive and hope for the best,” he said.