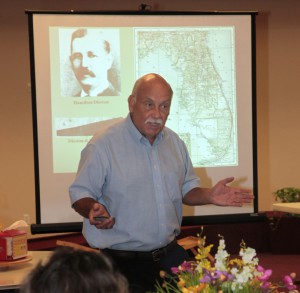 BIG CYPRESS — Seminoles living in Brighton and Big Cypress are connected to Moore Haven and Clewiston through more than proximity; the development of these towns was not only paramount in bringing the agriculture industry to the Lake Okeechobee area, but it also changed the Seminole way of life forever.

Butch Wilson, director of the Clewiston Museum, gave a historical presentation at the Big Cypress Senior Center Aug. 6, where seniors were enthralled by the rich history of the area. The presentation was provided by the Willie Frank Library.

“I want people to understand how the area was developed,” Wilson said. “The story I’m telling is the story of the Seminole way of life coming to an end. The drainage changed their lives; they no longer had the Everglades as they knew it.”

Evidence of agriculture existed near the lake decades before Americans thought to develop the area. During the Second Seminole War in the 1840s, American soldiers found an abandoned Seminole village on the south shore, where sugarcane was being cultivated. Indians were known to have traded with the Spanish in Cuba since the 1700s, and Wilson believes the sugarcane was brought in from Cuba.

Congressional passage of the Swamp Land Act of 1850 encouraged businesses to come to Florida by allowing drainage of the Everglades and Lake Okeechobee. Hamilton Disston, of Philadelphia, purchased 4 million acres of land from the state in 1881 with the intention of turning it into farmland.

“His vision was to make South Florida the winter bread basket for the nation by bringing in agriculture,” Wilson said. “All this had a negative impact on the Seminoles living here.”

In the 1880s, Disston dug canals wide enough for steamboat travel from Moore Haven to Lake Okeechobee, which connected the Caloosahatchee River to the Kissimmee River. At the turn of the 19th century, Gov. Napoleon Bonaparte Broward continued the vision to drain the Everglades by creating canals from the lake to the Atlantic. The North New River, Miami, Hillsboro and West Palm Beach canals were completed in 1917. The last of the canals, the Saint Lucie, was completed in 1925.

As hoped, the canals attracted people to the area around the lake, including James A. Moore, who died two months after purchasing the land. The town of Moore Haven is named for him. His widow, Marion, married his business partner John O’Brien and together, along with banker Alonzo Clewis, of Tampa, they built a railroad from Moore Haven to what would become Clewiston. With the railroad –  completed in 1921 – Clewiston was connected to the Atlantic Coast Line Terminus and could ship crops north.

Land speculators brought industry to Clewiston, but Marion O’Brien wanted Clewiston to be more than just a farm town; she had dreams of it becoming another Chicago. In 1923, she hired renowned city planner John Nolen to create the city on the lake. The design included a grand hotel and a yacht basin, but the plan was never realized because of an overabundance of rain in 1924 followed by two destructive hurricanes in 1926 and 1928.

The 1926 behemoth destroyed Miami and swept over Lake Okeechobee, breaching the 6-foot dike protecting Moore Haven and its fields. More than 400 people died as a result.

“Seminoles knew all about hurricanes; they had lived through them for hundreds of years,” Wilson said. “But white Americans were completely surprised by it.”

The 1928 hurricane did little or no damage to Miami, but it devastated the Lake Okeechobee area, where more than 2,500 people perished. The loss of life made it the second largest natural disaster in the U.S. to date, second only to the Galveston hurricane of 1900 which killed an estimated 8,000 to 12,000 people. As a result of the hurricanes a 65-mile long, 35-foot-tall dike on the south bank of the lake was completed in 1936 and a 15-mile stretch on the north bank was completed in 1938.

With the formation of the South Florida Water Management District in 1949, the dike was extended to the east and west sides of the lake. The 144-mile dike, which controls the flow of water throughout South Florida, was completed in the 1960s.

“The dike has protected people ever since,” Wilson said. “During Hurricane Wilma the water came to 1 foot from the top of the dike. Without the dike, it would be too dangerous to live around the lake.”