Skip to content
You are here
Home > Community > Pointing the way

Have you ever wondered how the Pointing Man signs came to be and why the likeness of Jack Tigertail became the “poster” image for more than his own Seminole community? 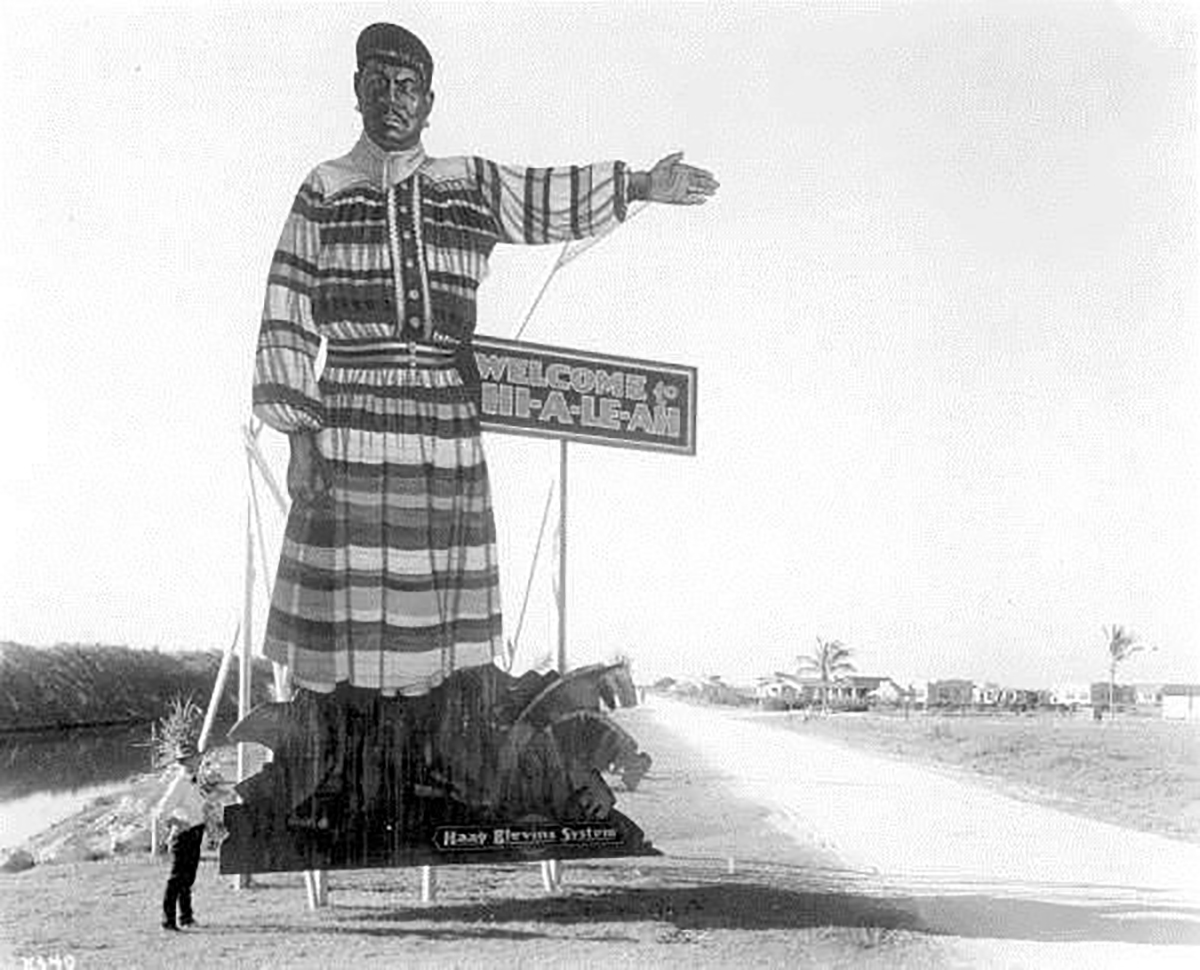 The story is as much about Jack Tigertail’s presence as it is about a clever marketing ploy used to sell a new, great idea to the American consumer-investor – drain Florida’s swamplands and create a “burgeoning tropical paradise.”

Transportation made available by Henry Ford’s Model-T automobile and the United States’ newly-found prosperity from its presence in WWI encouraged more Americans to search for opportunities beyond their home states. In Florida, development through dredging, the railroad and land boomers quickly carved out a new landscape. Road expansion projects, under the Federal Highway Act of 1921, brought more motorists and the emergence of new towns in Florida, necessitating new way-finding signs.

For those who have driven the length of the eastern seaboard and back, you’re familiar with the unending stream of billboard signs counting down the hundred or umpteen miles before you reach the roadside attraction “South of the Border” in Dillon, South Carolina. Perhaps you would rather not admit it, but your “kids” made you pull over. So, what is the connection between the two signs? It’s done in the spirit of tourism. Each sign points to a specific destination, with the same end goal – to sell an experience.

In 1921 that experience materialized when Missouri cattleman James Bright and fellow investor Glenn Curtiss, converted acres of Bright’s Hi-a-le-ah ranch land into real estate. Bright had purchased the land in 1914 to graze his Brahman cattle. Prior to then, Hi-a-le-ah, meaning “high” or “pretty prairie” in the Seminole-Creek language, was a meeting point for Seminoles and Miccosukee as they canoed along the Miami River. Now the Curtiss-Bright Ranch was gridded to form the first city west of Miami, to become the “Gateway to the Everglades”.

Life for the Florida Seminoles was rapidly changing, pressing Tribal members to seek innovative ways of living. Many turned to Florida’s burgeoning tourist industry. Like other families, Jack Tigertail, born in the Big Cypress swamp, moved his family east to camp at Coppinger’s Tropical Gardens. Coppinger’s was one of several local attractions that provided camps for the Seminoles from which to earn a small living from winter visitors.

Jack Tigertail became a natural leader among his Tribal peers in the camp. His big personality along with his keen business sense and ability to speak English bridged two cultures. Jack Tigertail gained popularity beyond the Seminole community, making him a larger than life figure honored in portrait. It was along County Road (Okeechobee Rd) and First Street (Hialeah Drive) that an oversized, wooden cut-out of Jack Tigertail first stood, welcoming and directing prospective buyers to the Curtiss-Bright Ranch real estate site.

The iconic 25-foot “Welcome to Hialeah” sign of Jack Tigertail, dressed in a traditional Seminole long shirt with arm outstretched, likely appeared imposing to the approaching motorists of the era. Certainly, the sign told motorists they had arrived at their destination and clearly sold an experience. I’d like to think of it another way: perhaps Jack Tigertail’s image stood as a reminder that one was approaching the lands of his ancestors.

The first Pointing Man sign was undoubtedly a unique and important roadside symbol in the history of south Florida. It is no wonder that even today the city of Hialeah still honors Jack Tigertail in its seal for his contribution to its early development. Within the Seminole community Jack Tigertail remains a prominent leader whose presence helped secure a cultural future for his Tribe.

In subsequent years other roadside cutouts have directed visitors to points of interest on Seminole and Miccosukee land – trading posts, tourists, and later craft shops and eco-adventures. In the spirit of the Pointing Man tradition, the Ah-Tah-Thi-Ki Museum has installed three signs. Two are posted along the Museum’s boardwalk, pointing visitors to the Hunting Camp and to the Village occupied by Seminole crafters. Though not nearly as imposing as the original, a third incarnation will soon appear on the way to the Ah-Tah-thi-Ki Museum and Billie Swamp Safari. Keep your eyes peeled.