BIG CYPRESS – The Seminole spirit of hospitality remained strong in the wake of Hurricane Irma. To show gratitude to Glades Electric Cooperative linemen, the Senior Center treated the workers to a hearty lunch Sept. 22 in the air conditioned facility. 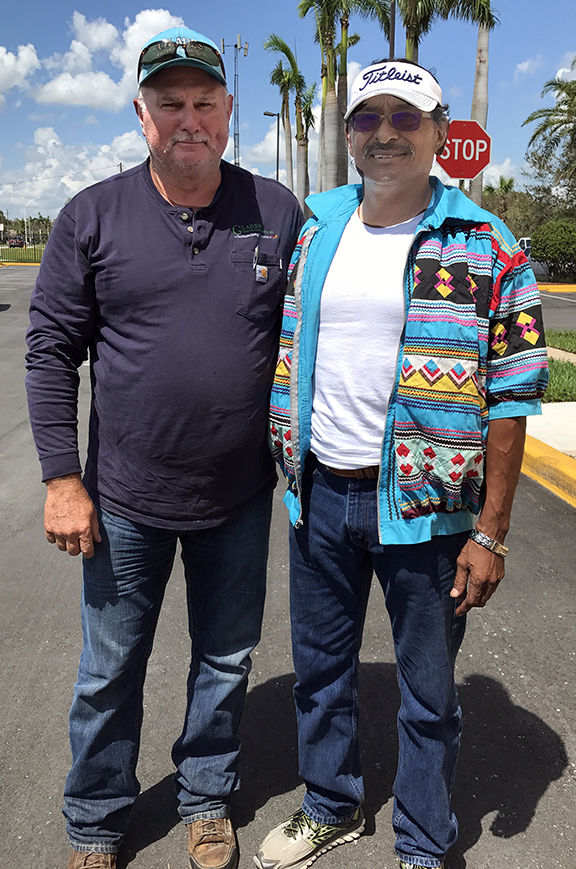 “It was the community showing appreciation to the individuals who came out to re-hook us up,” said Big Cypress Board Rep. Joe Frank. “I was glad to see the response we had. We received a lot of help from employees and community members who stepped up to help.”

Irma’s winds toppled utility poles and power lines that provide power to the reservation and it took 13 days for the power to be restored. Electrical workers from Louisiana assisted Glades Electric in restoring power to customers in Big Cypress.

“We really appreciate the linemen and Glades Electric. They spent their time out here away from their families,” said President Mitchell Cypress. “They didn’t have to, but that’s what we do in the United States after a disaster.”

Big Cypress Councilman Mondo Tiger noted that this was the first time the Tribe was under a state of emergency tribal wide. He appreciated the community volunteers and employees for their efforts during the disaster.

“Community members and staff thought it would be a good idea to invite the workers in and feed them to thank them for their work,” Councilman Tiger said. “They gave up their family lives for 13 days so we could have service.”

The idea for the luncheon developed when a few senior women saw the linemen working Sept. 21 in hot conditions and decided to bring them cold water and Gatorade. The men were so appreciative that the decision was made to invite them in for a hot lunch the following day.

Before lunch was served, senior Tribal member Betty King said a prayer. Twenty-eight workers ate at the senior center and another 23 to-go boxes were made for the next shift. The seniors thanked the workers and then left them alone to enjoy their meal.

“They couldn’t believe we went out of our way to do that,” Arreguin said. “They knew we were a shelter and had so much to do already. We wanted them to feel comfortable and they were loving the air conditioning.”

Before the linemen left to continue working in the 90-degree weather, they were given snacks for later and more water. 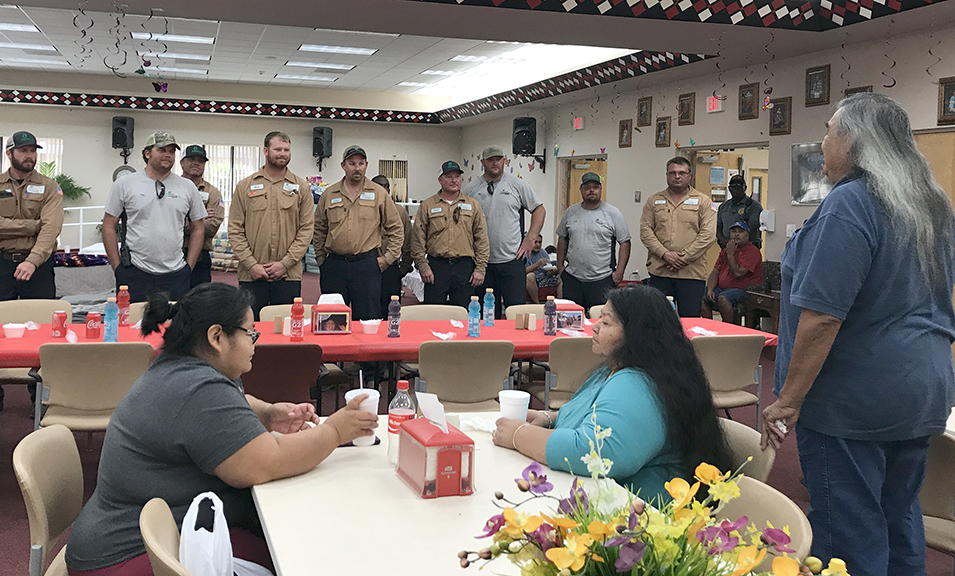 The company’s website kept a daily post-hurricane outage update. The following was posted by Denise Whitehead in its Sept. 22 update:

“We were able to bring the Big Cypress Seminole Reservation online. We have guys all over our territory still but a lot of them are at the reservation and they have power to all but 3 meters at the Reservation. Those three meters are inaccessible at the moment but we should have them finished up tomorrow.  We have all the homes with power now and we are very excited about that. We are tired and wore out but finally we got that accomplished. It was a big job.  I want to say thanks to the tribe for their hospitality to all our men who have been working down there so hard for inviting them to lunch today and showing them your appreciate it.  Thank you from the bottom of my heart for taking care of them like that. They very much appreciated it.

“Several of the crews have mentioned they have been taken care of far better here than in any storm they have ever worked. I’m so grateful that our own crews, as well as all of the visiting crews, feel like they are treated like family.”

Although things worked out well in Big Cypress and power was restored in less than two weeks after the hurricane, Rep. Frank believes this won’t be a unique occurrence going forward. Storms could grow larger and stronger due to warmer ocean temperatures.

“The Tribe has to remain diligent and be prepared for the next one,” Rep. Frank said. “If it’s worse, we could be without power much longer.”