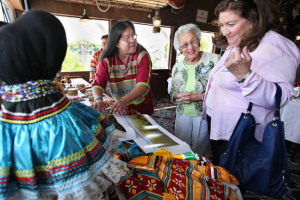 FORT LAUDERDALE — A Bonnet House meeting Jan. 19 at a restaurant on the bank of the Intracoastal Waterway in Fort Lauderdale became a lesson in history, current events and ecologic responsibility when a Seminole set the scene and a Miccosukee spoke the truth.

“The Everglades is in peril,” Cypress told nearly 50 members in attendance. “And the water is sacred. It unites us whether we use it for industry, agriculture or in our daily lives … but there is a tension between people and water and now both are suffering.”

Though the historic Bonnet House rests on a barrier island that kisses the ocean more than an hour east of the Everglades in Broward County, all water connects globally, Cypress said. He noted oil drilling and illegal fracking that threaten the Florida aquifer, the continued loss of habitat for wildlife including the endangered Florida panther, the fungus infestation of the cherished swamp bay plant and other factors that deplete Everglades resources.

For Bonnet House CEO Karen Beard and members who mostly hail from the East Coast, Cypress’ message was simple: What affects the Everglades, affects everyone.

“When you get on the barrier island you can see for yourself how global change is effecting the microcosm. I’ve been here 13 years and can see it,” Beard said. “Our water is all related from the ocean to the Intracoastal to the New River to the Everglades.”

Cypress, born in west Miami and raised in the Everglades, echoed the common theme throughout his lecture. He credited Marjory Stoneman Douglas for her revelations about the River of Grass, and he shared how he grew up to respect the living water for refuge, sustenance, spiritual healing and community.

He connected the dots from Gov. Napoleon Bonaparte Broward’s idea in 1905 to drain the Everglades for agriculture and development to the most recent Florida west coast drilling controversy that revealed the illegal use of fracking – a practice that could cause ruptures in the Florida aquifer.

“Science is the key to analyzing all of the problems that we see now with oil drilling, mining and runoff. We are not opposed to business but we just want to do it wisely,” Cypress said.

On Feb. 2, President Barack Obama proposed asking the Department of the Interior and the Army Corps of Engineers for $195 million to be used for Everglades restoration. Meanwhile, Gov. Rick Scott is supporting a plan to spend $150 million in state money.

Cypress posed the question: Who will spend the money and how will they spend it? And, he invited Bonnet House members to visit the Everglades, take an airboat ride or just meditate in the serenity of the vast vista. The membership agreed to organize a future field trip to experience the Everglades as a group, firsthand.

“You cannot care unless you know what we are talking about in our hearts, one to one, in science, in industry and even in spirituality,” Cypress said.