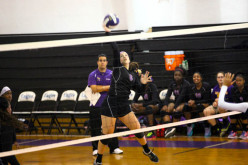 HOLLYWOOD — Even though his team made substantial progress a year ago, Hollywood Christian School girls volleyball coach Joseph Hernandez knew he needed something else to continue the march forward.

Shae Pierce arrived just in time to become, as Hernandez noted, the “missing piece of the puzzle.” Shae, who learned to play volleyball on the Brighton Reservation while playing for teams coached by her aunt Holly Johns, didn’t waste any time to positively impact her new team. She debuted with 19 kills, seven aces, six assists and five digs in the season-opener Aug. 26.

Throughout the season, Shae has been the team’s leader in several categories, including kills, digs, aces and serving percentage. She belted a season-high 20 kills in a district semifinal victory against Edison Private Oct. 21 as Hollywood Christian clinched a spot in the Florida High School Athletic Association’s regional playoffs for the first time since 1998.

Hollywood Christian’s ascension in the win column – from two victories two years ago to nine last year – has continued this season with 14 victories heading into regionals as the Class 2A-District 14 runner-up. Shae, a sophomore middle hitter and outside hitter who cranked out double-digit kills in 13 of 22 matches, has been a welcomed addition since she transferred from American Heritage School in Plantation this summer.

“Last year we made some strides,” Hernandez said, “but we still needed that go-to player, and she’s been that ever since she’s been here.”

Shae was named co-captain with junior Celeste Grimmett and sophomore Amber Smith on a young team that started fast with seven wins in its first eight matches.

Shae is not the only Pierce who has made significant contributions. Her sister Burgundy earned a spot on the varsity squad this season as a seventh-grader. Burgundy, who could wind up playing six years of varsity volleyball, has fit right in as a starting right-side hitter and defensive specialist despite facing opponents four or five years older.

“The best thing about Burgundy is that most people think she’s a freshman or sophomore in high school,” Hernandez said. “Sometimes she forgets she’s in seventh grade. Even though she’s a seventh-grader, she’s starting at the varsity level and contributing to the team.”

Those contributions include being in the top five on the team in most categories. She had 57 assists, second most on the team, after the district semifinals.

“I told her to be confident but stay humble about it because at the end of the day you’re still a seventh-grader. How many seventh-graders can say they’re starting at the varsity level in the county. There’s maybe a handful, if that,” Hernandez said.

Until this season, the Pierce sisters had never played competitive volleyball on the same team. As for whacking a ball at their house, they’ve done that for years and it’s paid off.

“We have a lot of chemistry because we’re always bumping at the house with our volleyball and going to the gym and playing,” Shae said.

A mid-season injury relegated Burgundy to the sidelines during a match Sept. 18 against Somerset Academy. Hernandez said Burgundy’s absence hurt the team, which lost the match, but not before a gallant comeback effort was led by Shae.

With her mother, Claudia Gore, and younger brother Todd Pierce watching from the stands, Shae’s poise in the serving department was tested because Somerset was only one point away from winning the match. Any miscue by Shae would have ended the match, but she promptly reeled off six consecutive service points – including a few aces – to put Hollywood Christian in front.

Although Somerset went on to win, Shae’s sizzling serves at a critical juncture served as examples of her intense desire to win.

“The biggest thing with Shae is that she’s been kind of like the heart and soul of our team,” Hernandez said.

“Sometimes the girls get down and you’ve just got to talk to them and they pick up. Once we get it together, we’re unstoppable,” Shae said.

As a multisport student-athlete, Shae said her first passion is basketball – she was a standout at Pemayetv Emahakv Charter School – but she also enjoys volleyball.

“It’s my second sport,” Shae said. “It’s not as challenging as basketball, but there are things more particular that you have to focus on in volleyball like your approach or your setting or bumping and serving.”

Hernandez said Shae gets the most out of her 5-foot-7 frame.

“She definitively plays bigger than her height,” Hernandez said. “If she can’t outjump them or outplay them, she’ll outsmart them. The IQ she has on the court, you can’t teach that.”

Burgundy has benefited from being teammates with her older sister while making a smooth transition in the large leap from middle school volleyball to high school varsity.

“She has a great attitude about it,” Hernandez said. “Having her sister here has been a great turnaround for her. She’s been much more focused and determined. She was kind of young last year (on the middle school team), but now she’s much more serious about the sport. That’s the accountability level from her big sister.”