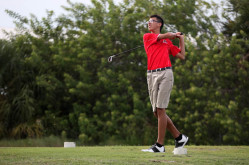 BIG CYPRESS — Birdies and bogeys weren’t the most vital parts of the season for Ahfachkee School’s golf program. With fairways full of inexperience, Ahfachkee used this fall to absorb and to have fun.

“They’re learning and enjoying it; that’s the important thing,” Ahfachkee coach Amos Mazzant said before the senior-less Warriors played their final rounds in mid-October. “We’re inexperienced. We’re doing a lot of work learning fundamentals. They’ve been practicing hard. The hardest thing for us on the course is experience.”

A few rookies new to golf donned the teams’ red shirts and began playing a sport that can last a lifetime. Experience generated from this season’s matches – including being represented by four players in district tournaments – should pay off in the future because all the players could be back next year, including the program’s No. 1 player Troy Cantu.

Even though he’s just a freshman, Troy brought the most experience to the team. As an eighth-grader last year, he competed in his first district tournament. This season he served as the captain. Mazzant said Troy usually shot in the low 50s for nine-hole matches, which bodes well considering he has three more years of high school golf and ample time to lower his scores.

The Alvarado brothers – Jonah and Isaiah – comprised the remainder of the boys team.

Jonah, a sophomore, was with the team all season. Isaiah, a seventh-grader, joined during the final weeks. But they weren’t the only Alvarados to tee it up.

Their sister, Chelsey, played on the girls team along with sophomore Nashoba Gonzalez and eighth-grader Thomlynn Billie.

Ahfachkee was represented by two golfers each in the boys and girls Class 1A-District 18 tournaments in Naples. Troy and Jonah played at Golf Club of the Everglades Oct. 14.

The girls played their district match at Vasari Country Club Oct. 13. Chelsey, a junior, led Ahfachkee with a 136. Nashoba shot a 144.

Although no Ahfachkee golfer advanced to regionals, the players not only can build from the experience on the courses, but they can also benefit from a new driving range on Big Cypress Reservation.

The range features a hitting area to smack drivers and irons. It also contains two practice putting greens and a sand trap that allows players to hone their short-game skills.

Mazzant said the range will help his players and could attract other students to the sport.

“Hopefully this might encourage other kids to see other phases of the golf game,” he said.