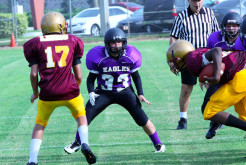 HOLLYWOOD — Maurice Tyler II wasn’t certain if football would suit him. He has the size coaches love in a lineman, but whether Maurice would love playing the game was another story.

Todd Pierce, on the other hand, didn’t need any arm-twisting to put on pads. He’s used to revving up his adrenaline in sports, namely the one he’s most familiar with: bull riding.

“It gets your momentum pumping,” said Todd, a sixth-grader who qualified for the Indian National Finals Rodeo (INFR) that will be held in November.

Before Todd set his sights on the national competition in Las Vegas, he tackled his first football season. Todd and Maurice are in middle school, but both Seminoles tasted high school football on the junior varsity team at Hollywood Christian School this fall.

The school didn’t field a varsity squad this season – it’s expected to be back next year – but a junior varsity team sprinkled with middle schoolers played in an eight-on-eight league.

Thanks to Dunn’s encouragement, Maurice came out for the team last season. He returned this year with a boost in confidence.

“I invited him to come out (last year). I didn’t know what to expect because he’s quiet, he’s shy,” Dunn said. “Now I’m seeing a whole new side of him. In his own ways, he’s come out of his shell. He’s attending basketball and volleyball games and mingles with the guys.”

The eighth-grader said he’s glad he joined the team.

“Everybody kept asking me to play,” said Maurice, who worked double-duty this season protecting the quarterback and opening holes for running backs as an offensive lineman, and seeking out opponents to sack and tackle as a defensive lineman.

At 5-foot-10, 291 pounds, Maurice and his purple No. 70 jersey bring a significant presence to both sides of the ball, but size is only one aspect that makes him appealing.

“He’s very athletic,” Dunn said. “I have him for (physical education class). He tests out in jumps better than any of my linemen. He’s got better vitals and stats as far as physical assessment – better than any other of the linemen.”

Dunn expects Maurice to continue to improve on the field as off-the-field regimens – such as conditioning and weight lifting – begin to play a bigger role.

“When he finally gets to where he’s got enough wind to go the entire game, he’s going to be outstanding,” Dunn said. “The goal for him is to keep him busy in the offseason, lifting weights and that kind of stuff.”

Days after he punched his ticket to INFR in a rodeo arena, Todd was back on the football field at Hollywood Christian chasing down running backs during a game against Fort Pierce’s Golden Rule Academy. He made four tackles and helped pave the way for a touchdown by the defense.

Todd spent most of the season in the joker position on defense. The hybrid role is a cross between a defensive back and linebacker.

“He’s only in sixth grade and he’s playing against ninth-graders,” Dunn said. “He’ll be one of our key players moving forward. He knows the plays real well. He helps line people up on defense.”

Todd’s duties extend beyond defense. On offense, he earned a spot as a starting fullback. He scored in a preseason scrimmage.

His versatility was evident on special teams, as well.

He was the punter this season and played on the kickoff squad.

Whatever role was required of him, he filled it.

“Todd has one of the best attitudes I’ve got. He’s gung ho,” Dunn said. “He has learned so much over the last few weeks. He came out a little late, but he picked it up right away and moved into the starting lineup at fullback.”

Now that Hollywood Christian’s football season has ended, Todd will shift his focus back to rodeo. He is scheduled to compete Nov. 6-7 in the Jr. Bulls division at INFR.

“This is the first bull rider I’ve ever coached,” Dunn said.