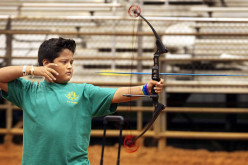 BIG CYPRESS — Jacob “Jake” Osceola grew up using a bow and arrow to hunt boar, deer and other creatures for meat.

“But archery is different when it’s a sanctioned sport. For Olympian competition, it is refined system,” said Osceola, site manager for the Recreation Department at Big Cypress.

Archery, a projectile weapon style of hunting and warfare that predates history, is open for Tribal and non-Tribal people to learn from 5 to 6:30 p.m. on Fridays at the Junior Cypress Rodeo Arena.

With Osceola at the helm, about 30 children and adults turned out Dec. 5 for the second lesson of the ongoing series. Safety is always first – the crowd also included two firefighter/paramedics from the Seminole Fire Rescue Department.

Rows of chairs made a 6-foot border, called the waiting line, from a trio of tables lined with bows and arrows of various sizes and weights. In front of the tables, bales of hay marked the shooting line. The bales were also used to collect the arrows, tips first, once pulled from the targets.

All the steps of archery were covered, some one-on-one, according to age level, physical ability and understanding of the sport. Osceola reviewed stance, finger and hand placement (called nock), and demonstrated how to hook and place the bow hand, extend the arm, draw the string, aim and let go of the arrow.

Diamond Osceola was in the midst of her third lesson. At the end of the 90-minute class, with clown face targets used to replace the usual bull’s-eye diagrams, Diamond showed three “kill” shots out of five arrow attempts.

Two whistle blasts call archers from the waiting line to the shooting line. With one blast, archers may place an arrow on the bowstring and begin shooting. Three blasts signals that archers can walk forward to the targets and retrieve arrows. If four or more whistle blasts are sounded, all archers must stop shooting immediately.

Typically, girls are not permitted to shoot bows and arrows, said Joe Frank, who attended the lesson with his daughter Valholly Frank, 12. For athletic competition, however, and for girls who do not have a clan, giving permission for Tribal daughters to shoot is a family decision.

For Valholly, who owns several archery sets, permission to shoot led to the sixth-grader’s inclusion in the 2014 North American Indigenous Games where she placed fourth among competitors in the 16U traditional style category.

Javian Cypress, 10, said he is learning archery because his mother told him that the sport is important in real life – for survival.

“I always tell my kids that hunting and shooting is always good to know, just in case,” said Javian’s mother, Janie Valdez.

Hunting and competition are both good reasons to learn archery, Jake Osceola said, but he hopes the lessons spark more children to compete on school, community and reservation teams and at national Indian and non-Native tournaments.

“We are absolutely not at competition level yet. We just want it to be fun for now. Who knows what will come of it,” Jake Osceola said. “But so far, I think I see a few ringers in the group.”