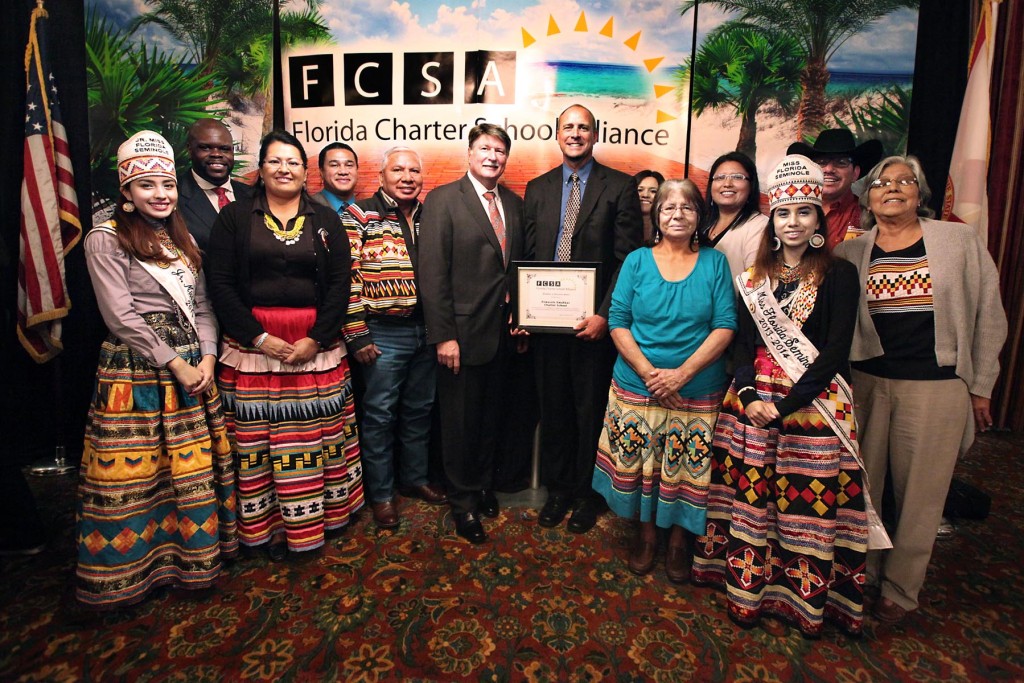 TALLAHASSEE — Pemayetv Emahakv Charter School is tops among Florida charter schools and here’s the proof: The 6-year-old, Tribe-operated school was one of only six charters statewide to be recognized April 2 during a private lunch at the Governor’s Club in the state Capitol.

The celebration, hosted by the Florida Charter School Alliance, honored the school with an Excellence in Education Award  “in recognition of your dedication to quality and innovations in education. Your outstanding leadership in the charter school movement is visionary,” read the award’s inscription.

According to the Florida Department of Education’s Office of Independent Education and Parental Choice, 200,000 children were enrolled in 578 charter schools statewide during the 2012-13 school year.

“You made us a top school; you are in the trenches every day,” he said to students. “We are very proud to be considered one of the top schools in the state. We hope this is the start of a trend.”

The PECS elementary school already boasted the top FCAT scores in the Heartland Educational Consortium of 29 schools in DeSoto, Glades, Hardee, Hendry, Highlands and Okeechobee counties. The middle school is among the top three in the rural Central Florida association.

“You have an iconic school that occupies a unique space and important place in our nation. It is essential that we promote the great things you do,” Biden told Norman “Skeeter” Bowers, one of 18 Seminole members and employees who attended the event.

Others from Brighton were Rita McCabe, Jennie Shore, Louise Gopher and Lewis Gopher.

A special round of applause was received by Louise Gopher who seeded the school in 2001, with help from the Brighton community, when she launched the Pull-Out Program, which plucked Tribal children from off-reservation public schools every Friday for Creek language and cultural arts classes. Later, she worked closely with Tribal members, officials and Mike Strader, of Charter School Associates, who guided the school to its opening in August 2007.

Strader said he nominated PECS for the recent award because the state-rated “A” school has consistently earned the status of “high performing charter school” according to rigorous guidelines. The state’s Commissioner of Education affirmed the nomination.

PECS also boasts a five-star rating on the website GreatSchools.

“When you talk to (senators), tell them thank you for the $91 million they provided before for building new charter schools, but tell them that the $50 million they want to give for next year is not enough,” Arza said.

Biden, a democrat, said the issue is not about politics – it’s a matter of the heart.

“This is not a democrat or republican issue. It’s what’s best for our children,” he said.

Greseth also spoke from the heart during the presentation. He said PECS gives students “fantastic opportunities” to advance the Seminole culture and become future leaders. The school is about 90 percent Tribal and 10 percent children of non-Native staff and employees.

For Louise Gopher, finding out that the school would be honored at the state Capitol was another in a long string of “pleasant surprises.”  The first came on the day the doors opened when 30 more students than expected showed for class. By the end of the year, the school had earned its first “A” rating.

She responded to the Tallahassee luncheon invitation with three words: “Yes, yes, yes.”

“It’s been so exciting,” Gopher said. “I never thought we’d have extracurriculars like basketball and volleyball, but we do. I thought K through 5 would be great, and then we had middle school,” Gopher said. “We’ve had many pleasant surprises.”