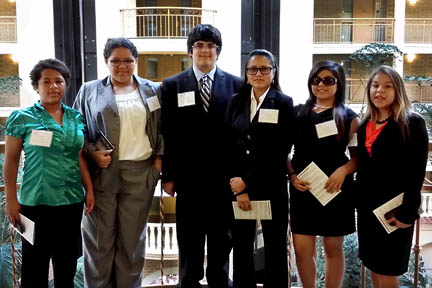 Eighth-grade student Elisah Billie said wearing a suit and tie at the Florida FBLA 2014 State Leadership Conference in Orlando was a first-time experience.

“It felt good to wake up, get a shower and then dress up. It gave us a real sense of professionalism that we don’t get from baggy shorts and basketball shoes,” he said.

“Even though we could not compete and only watch because we are so new, I’m glad we did it. Now, they’ve experienced what it will take to prepare for next year,” Meinders said.

Workshops about networking, challenging the ordinary and establishing habits for success were peppered through the program. Members were tested individually in banking, network design, entrepreneurialism, help desk assistance and other topics.

Eyanna, president of the middle school club, said her favorite session was about making and keeping business contacts. Kaitlin, who wants a career in marketing, said the entire event was special.

“Seeing the dedication of all those students made me think about what we can accomplish at Ahfachkee,” Kaitlin said.

Elisah, who wants to start his own business as a video game programmer and also host official sport competitions for gamers, said the conference gave him a chance to meet teens who shared his interests.

“Making relationships with a bigger range of people is really important for business. I did not just go for the ride,” Elisah said. “I want to do what I love to do and get paid for it.”

The Ahfachkee students likely will not attend this year’s national conference June 24-27 in Nashville, Tenn.

Meinders said Ahfachkee will be ready for the state competition next year in Orlando and for the regionals in New Orleans, La.

Ahfachkee principal Lucy Dafoe said the after-school club will work in tandem with business classes “as another educational source besides a textbook” that could, in the future, serve Tribal interests.

“We want to build on the culture and language cornerstone of the school,” Dafoe said. “We need to bring students up to be knowledgeable leaders in business practices, business law and entrepreneurialism so they can be part of Tribal business. It’s paramount.”

Nashoba, president of the high school chapter, is all in.

“There is a whole other world out there. It’s our job to learn everything we can and then bring the knowledge back to the Tribe,” she said.

The Ahfachkee FBLA chapter was formed only three weeks prior to the conference – and just three days after Meinders’ first day on the job. Of the school’s 55 middle and high school students, 22 joined in the first week.

Previously, Meinders advised the largest FBLA club in Chicago with 150 members and he served on the Illinois FBLA board of directors. Nationally, the club boasts 250,000 members and is the largest career-oriented student organization in the world, he said.

Still, kids will be kids.

MegaCon, the largest celebration of comic books, video games, anime and fantasy fiction in the region, was held in the same hotel on the same weekend as the student business conference. Nashoba said it was hilarious to see thousands of teenagers dressed like adults for the FBLA conference while throngs of MegaCon adults sported zany costumes of favorite fictional characters.

Coincidentally, Elisah packed his Harry Potter costume for the weekend and wore it to dinner one night hoping to “totally embarrass” his friends and chaperones. He was such a hit that strangers from MegaCon posed with him for pictures.

“I didn’t realize that I would actually fit right in,” Elisah said.