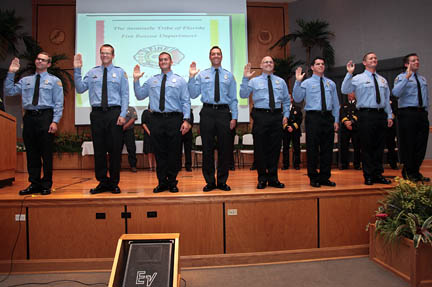 HOLLYWOOD — The Seminole Tribe Fire Rescue Department is so selective about who it hires that even to apply, candidates must have completed fire academy and passed the state certification exam.

Out of 160 applicants this year, only eight were selected to tackle the department’s rigorous eight-week training program. Only after successfully completing training would they join the ranks of the 139-member department.

All eight made the cut, and they were honored at a graduation ceremony March 27 in Hollywood.

“These are a uniquely talented group of people,” DiPetrillo said. “If it wasn’t for their family support, these firefighters wouldn’t be here today.”

“They’re ready,” said Deputy Chief Mark Steele. “We prepare them to go to the front line and they are mentally prepared for different areas – urban or rural.”

Eduardo Costa always knew he wanted to be a firefighter. But after he finished fire and medic school, he learned how hard it is to get a job in fire service. He volunteered at Broward Sheriff Office’s Department of Fire Rescue for about a year to gain experience.

“This is still surreal for me,” said Costa, of Plantation. “Waking up, putting on the gear and coming to work – I still have to pinch myself. A lot of the other guys feel the same. It feels amazing.”

When Costa went through school, he got a taste of the brotherhood and camaraderie among firefighters.

“It’s more in perspective now of just how close these guys are,” he said. “I’m very fortunate and blessed to be part of it.”

About 22 million people visit the casinos, attractions and hotels on the reservations every year.

Fire Rescue has arrangements with nearby municipal fire departments to provide aid as needed.