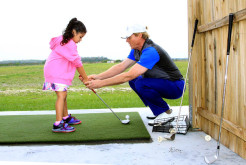 BIG CYPRESS — For the second time in six weeks, a golfer with PGA Tour experience shared his knowledge with youngsters in Big Cypress.

Florida Gulf Coast University men’s golf coach Eric Booker, 51, who earned more than $300,000 on the PGA Tour in 1999, was part of an entourage of coaches from the Fort Myers college that spent March 7 teaching kids about golf and volleyball during a daylong clinic.

“Keep your eye on the ball. Hold that balance,” Booker instructed Avahny Jim as the 6-year-old used a 3-wood to hit a ball from a rubber tee implanted in an artificial grass mat at the Big Cypress golf practice range.

“You might be a natural,” Booker told Avahny after she belted a few shots into the open range.

Booker was about Avahny’s age when he first started playing golf.

“My dad owned a public golf course, so all of us grew up playing golf. We had a place to play. That’s how we got started,” he said.

Thanks to the new practice facility, kids on Big Cypress have a place to learn the game.

“This is a brand new facility. They’ll come out here and practice. Who knows what it will build into,” said Booker, whose pro career included a victory in the Nike Tour’s Lehigh Valley Open in 1998 when he defeated Notah Begay III in a nine-hole payoff.

Begay, a Native American who went on to win four times on the PGA Tour and is now a commentator for Golf Channel, talked to a group of Ahfachkee School students at the range in January. Booker, who never won a tournament on the PGA Tour but finished in the top 10 three times, said Begay jokes with him about losing the sudden-death playoff. At the time, it was the longest playoff on the Nike Tour, which is now the Web.com Tour.

As Booker provided advice about stance, grip and swing on the mats, youngsters rotated through a variety of instruction stations. FGCU women’s coach Sarah Trew taught chipping on a grassy area and Eagle players Sara Detlefsen and Georgia Price provided putting tips on the practice green.

“It’s not often we get to work with kids; we enjoy it when we do,” said Price, a native of England who starred at Fort Myers High School before she joined FGCU.

Similar to Booker, Price became involved in golf thanks to her father.

“My dad played and he started taking me to clinics. I loved it,” said Price, who started playing at age 11. The senior said she might give professional golf a shot after she graduates in May.

Nashoba Gonzalez and Troy Cantu, both from Ahfachkee’s golf team, were among the participants. Troy, 14, said FGCU’s coaches helped him with his stance and taught him how to generate more power in his swing.

“They helped me fire through the ball,” he said.

Troy pointed to the sand trap area at the facility as a place that will benefit his game. He said playing golf with Big Cypress Councilman Mondo Tiger and Charlie Osceola has made him want to improve.

“I see them play and some of their chip shots from the sand, they hit it right close to the hole,” Troy said.

Chilly and blustery weather hindered those who wanted to launch long drives.

The golf session ended in the late morning. After lunch, a few youngsters switched sports as they joined others at the Herman L. Osceola Gymnasium for an afternoon of volleyball instruction from FGCU head coach Matt Botsford and assistant coach Danny Mahy.

The program, which drew about 15 kids, started with Botsford telling everyone to toss a volleyball as high as they could and catch it behind their backs. Some were successful, others not so much, but the drill provided an icebreaker before the coaches formed small groups and provided basic instruction on hitting, passing, receiving and serving.

“If someone walks away from it with a rejuvenated view of volleyball, that’s great,” said Botsford, who will hold volleyball camps in July for ages 10-18 at FGCU’s Alico Arena.

The golf and volleyball sessions marked the latest venture to the reservation by FGCU athletics. Last September, the men’s basketball team held a clinic at the gymnasium.