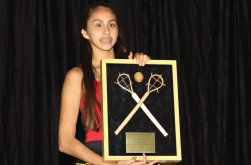 BIG CYPRESS — Decorative lights made the ceiling at the Herman L. Osceola Gymnasium appear as if it was full of stars May 15.

Schimmel, the younger half of the famed Native American sister duo that helped the ascension of Louisville basketball during the past few years, usually plays guard when she’s on a basketball court, but this time she served as the evening’s featured speaker in front of the student-athletes, coaches, school administrators and families. The words and advice from her eight-minute speech didn’t go unnoticed, even by a University of Connecticut fan.

“Like she said, she’s not the biggest or fastest, but she always goes out and plays with heart. She’s a really humble person,” said multi-sport student-athlete Dasani Cypress, who is a fan of the sisters and the national champion Huskies.

“I think it was really great to see her come here,” added Leilani Gopher, a basketball teammate of Cypress. “I never thought she’d come to our rez. She said other people might not believe in you, but always believe in yourself.”

“I listened to everything she said, talking about sticking with school and using sports as something to get you by in life. I really think that’s true,” said golf captain Quenton Cypress.

Perseverance – be it in sports or elsewhere in life – was a constant theme of Schimmel’s talk. She explained how her freshman year at Louisville was almost her last.

“I was just really upset with the way my freshman year went. Honestly, I almost didn’t go back to college. (That summer) I cried to my parents and I cried with friends,” she told the audience.

Schimmel, from the Confederated Tribes of the Umatilla in Oregon, didn’t give up on college or the Cardinals. She returned for her sophomore season and helped lead the team to the NCAA championship game, which UConn won.  She will head into her senior season this fall as one of the team’s key returners.

“It takes a lot of hard work and a lot of practice,” said Schimmel, whose sister Shoni made her pro debut in the WNBA with the Atlanta Dream the following night. “Luckily, you can carry that over into anything that you do, especially when it comes to school and anything else you have to deal with in life.”

During the awards portion of the evening, hard work and dedication were mentioned several times by Ahfachkee coaches, who praised their players. For example, the middle school boys basketball team only had the bare minimum of players, and at times even less, but head coach Cicero Osceola said there was no quit in his team.

“We ended up having four players and we beat (a team from) Tampa. They loved it. These kids play hard and they don’t give up,” Osceola said.

The middle school girls basketball team, coached by Amy Osceola, made the most of a tall, but small squad. With just five players, it finished with a perfect 9-0 record.

Volleyball coach Dessie Thomas noted that her middle and high school teams didn’t have a home gym because of renovations but still enjoyed the season wherever it took them.

“They worked very hard. They had to overcome a lot, but through it all at least we had a great time going to games,” she said.

The varsity girls basketball team was recognized for advancing farther than any Ahfachkee team. With two seniors, one sophomore and the rest from middle school, the team went 15-4 and earned a trip to the Class 2A regionals as a district runner-up.

Dasani Cypress, the team’s leading scorer with an average of 17.9 points per game and Ahfachkee’s lone golfer to reach regionals last fall, received the school’s Lady Warrior of the Year Award. Principal Lucy Dafoe said the award is made special each year for a student who exemplifies high academic standards, leadership and sportsmanship.

Devan Bowers from the boys basketball team was named the Warrior Award winner. Cypress and Bowers also won the awards in 2013.

Every team doled out certificates of completion along with other awards for most valuable players, up and coming, and hustle.

Cheerleaders from the early elementary school grades were also recognized. Peggy Sue Cypress received the Golden Megaphone Award and was mentioned by Dafoe as being the first in line to see Schimmel.