MOORE HAVEN — Pemayetv Emahakv Charter School doesn’t have a football team, but it does have football players.

Six kids, all from grade 7 at PECS, are playing big roles on the Moore Haven junior varsity/middle school team. They helped the squad notch a pair of impressive wins in its first two games.
With Pherian Baker, Ysla Gopher, Corey Jumper, David King, Deagan Osceola and Sir Marcus Osceola in the line-up, Moore Haven opened with a 36-6 win against the middle school team from First Baptist Academy in Naples. After a two-week interruption thanks to Hurricane Irma, the Terriers, whose roster features nearly all middle school students, improved to 2-0 with a 50-6 win against Donahue Academy of Ave Maria on Sept. 21. 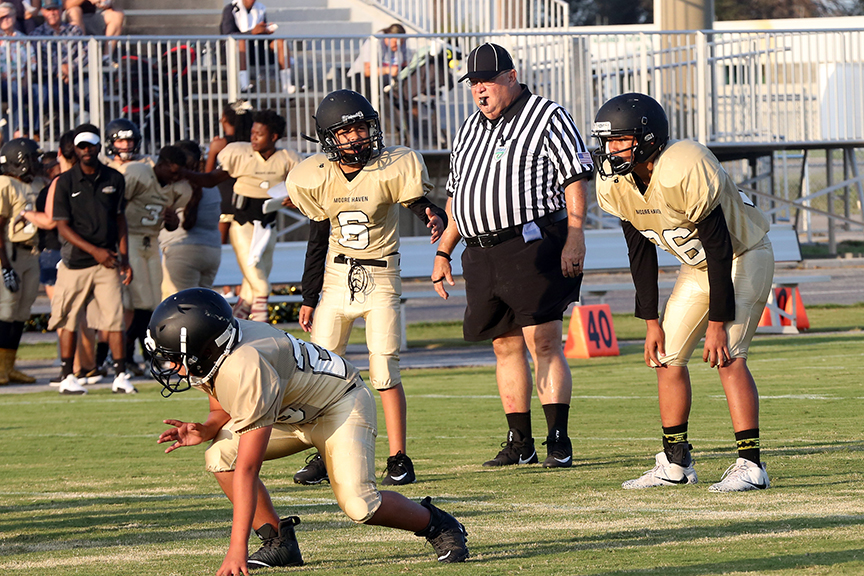 The Brighton-Moore Haven pipeline helps place students from PECS with a team while benefiting Moore Haven, too.

“It’s awesome,” said Moore Haven varsity coach Max Manin. “We have a great relationship with them. Those kids are so respectful and they work really hard. I know it’s great when they come here. We really enjoy having them on the team.”

Deagan didn’t play against Donahue, but the other five players made significant impacts led by Corey at middle linebacker. In a defensive series in the first quarter, Corey made two tackles that forced Donahue to punt. When it looked as though nobody would pick up the ball on the ensuing punt, Corey grabbed it and outran defenders on his way to a 45-yard touchdown.

“He brings a whole lot to the football team on the defense,” said Moore Haven JV/middle school coach Al Gary.

Pherian Baker played center against First Baptist, but switched to the defensive line against Donahue. He also made a solo tackle on a kick return in the fourth quarter. Moore Haven’s defense held Donahue scoreless until the final play of the game.

Ysla, the only girl out of 35 players, played cornerback and returned a pair of punts. She brought the quarterback down on a scramble and made a solo tackle on special teams.
David saw plenty of playing time at safety and was involved in a handful of tackles.

“David is outstanding,” Gary said. “Very humble kid. Always likes to be on the tackle.”

Sir Marcus fought his way through the line to put pressure on the quarterback all game from the left tackle spot.

“Sir Marcus, first year here, had an outstanding game tonight. He surprised us. He was in on a lot of tackles,” Gary said.

Donahue had just 11 players and two coaches, so the game was played 8-on-8 on an abbreviated field.

All the Brighton kids said they would like to continue playing football when they reach high school.