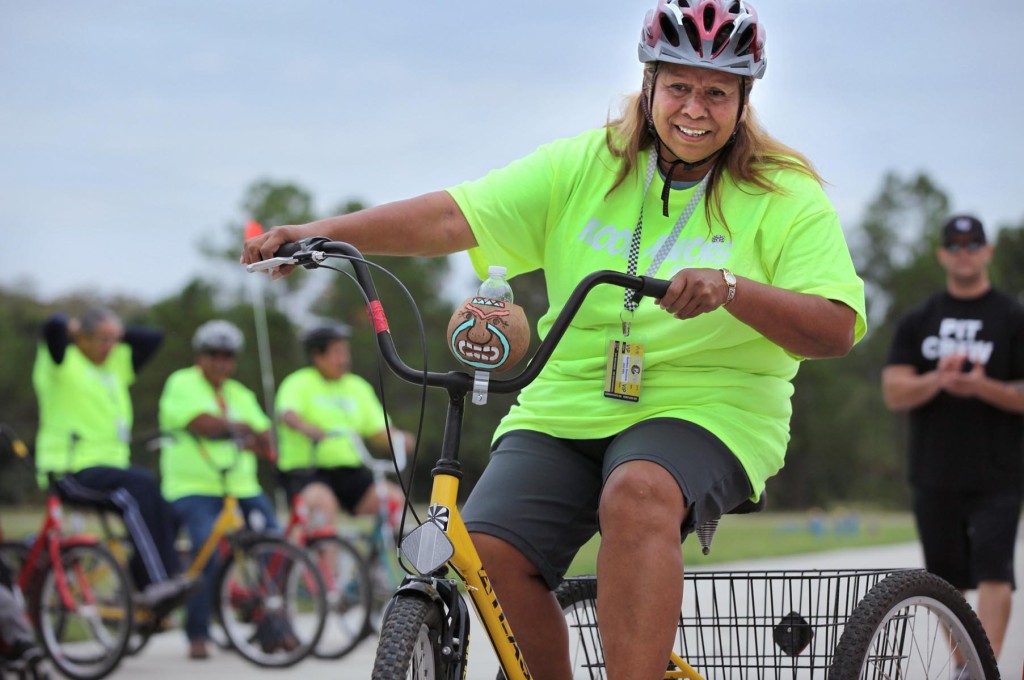 “We did it before and we’ll do it again. We’re ready to rock and roll,” said Brighton Board Rep. Larry Howard at the Big Cypress airport hangar turned NASCAR race course packed with nearly 100 seniors revved and raring to go.

Big Cypress Councilman Mondo Tiger snapped back: “Hey, are we upset from not winning last year? Yes, so now we’re back to win it.”

“You know when our seniors are in town because we come with a police escort – and that’s a good thing,” Rep. Osceola said.

All the while, race-themed music blasted full throttle – the Beach Boys’ Fun, Fun, Fun and I Get Around; Steppenwolf’s Born to be Wild; and Janis Joplin’s Mercedes Benz. NASCAR champion Todd Bodine was on hand to pose for pictures with seniors and a racecar from the first Native-owned race team Germain-Osceola, which is part owned by Tribal member O.B. Osceola Jr., of Naples.

“No crashing, no speeding, have a lot of fun,” he said.

Strict guidelines were already dictated by the Health Department, which staged the event led by director Connie Whidden. Each station was manned by a course manager, timekeeper, time clock operator, penalty judges and a safety assistant.

Serious physical training had been full-speed ahead at reservation senior centers for about two months.

Super seniors (ages 55-61), Golden Seniors (62-68) and Diamond Seniors (69-up) earned points that were later tallied to determine winners for each challenge. But not all seniors took to trikes. Seniors unable to ride due to physical issues competed instead in walk up “hiker” events for chances to win in target toss, ladder ball and ring toss games.

In his third consecutive year on the Hollywood team, Moses Osceola laughed after a successful end at the zany puzzle challenge station, but later he admitted that the 2013 games marked the first time he practiced.

“Before, I always came unprepared. This year I trained going through the cones and riding fast. I’m ready to win,” he said.

Though Big Cypress swept the grand finale five-member tricycle relay race and Tampa owned the most participants category for the fifth consecutive year (tallied by percentage of total residents), Brighton championed the Trike Fest overall for the fourth time in five years.

Cheering sections clearly hoped for the rival Big Cypress or Brighton teams to take home the coveted trophy, but it was a close call with Brighton at 115 points and Big Cypress at 108. Hollywood placed third overall, Tampa came in fourth and Immokalee was fifth.

“Mostly, it’s fun to be out here with good company. There is great camaraderie here,” Moses Osceola said.