Skip to content
You are here
Home > Sports > From start to finish, PECS produces perfection 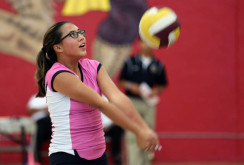 They all sum up a perfect season for the Pemayetv Emahakv Charter School girls volleyball team.

The Lady Seminoles finished a memorable season with a 10-0 record that included nine shutouts. Only one team – Yearling Middle – managed to win a set; the other 20 sets belonged to the girls from Brighton.

Coached by Kim Jackson and assisted by Pam Matthews, PECS started its season Sept. 3 with a win against Moore Haven that was highlighted by 10 aces from Alaina Sweat. The Lady Seminoles were just starting to get revved up.

Three kills from Raeley Matthews and five aces from Julia Smith paved the way to victory against Everglades City Sept. 11.

The closest match of the season came Sept. 17 when Yearling – the only team that beat PECS in the 2013 season – won a marathon second set to force a third set, which PECS won 15-8. Aleina Micco’s 12 aces and six kills, and Raeley’s nine kills proved to be pivotal. Other strong performances came from Julia with four aces and two kills, Krysta Burton with three aces, Cady Osceola with three kills and Aubrey Pearce with one ace.

PECS blanked opponents for the remainder of the season. The team sizzled in the serving department with more than 20 aces against Clewiston Sept. 25. Alaina led the way with 10 aces followed by seven from Aleina and three from Janessa Nunez.

Raeley drilled 12 kills, Julia had four aces and Madisyn Osceola had four kills and one ace Sept. 30 in a tough win against Osceola as the Lady Seminoles headed into October with a 6-0 record.

PECS won its final home match of the season against Osceola Oct. 13. While wearing pink shirts and using a pink ball in recognition of breast cancer awareness, PECS made its eighth-grade parent night a success thanks to its four eighth-graders. Raeley led the squad with seven aces and six kills, Aleina contributed four aces and three kills, Krysta notched two aces and Cady had one kill and one ace.

The Lady Seminoles put the finishing touches on their undefeated season with a win at Westglades in Parkland Oct. 14. In their final match as Lady Seminoles, Aleina had seven kills and one ace, Raeley contributed four kills, three aces and one block, Krysta notched one ace and one kill and Cady had one ace.

Alaina, Julia, Jacee Jumper and Jenna Brown – among the core that will try to keep the winning ways alive next season – combined for seven aces.