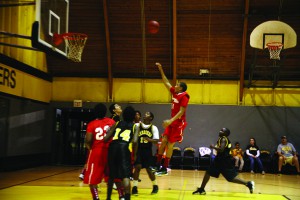 For both the girls’ and boys’ basketball teams, excitement fills the air for coaches, parents, students and the community when they take to the court.

So far, the boys hold a 4-1 record with one loss to their rivals, the Yearling Middle School Bulls, while the Lady Seminoles hold a 5-0 record (as of their first home game on Dec. 4 against the Moore Haven Terriers).

“Our goal is to go undefeated this year, and I don’t think we will accept anything less than that,” head coach Tim Thomas said. “Last year, we had a lot of close games (because) of the free-throw line.”

Thomas said the perfect season is attainable for the Lady Seminoles based on the level of leadership, enthusiasm and eagerness of the girls on the team.

“Our point guard eighth-grader Shae Pierce is one of the best players on our team,” Thomas said. “She averages 20 points per game, as well as our guard Odessa King, averaging 9 points; and Sydnee Cypress, averaging a near 6 points.”

Although King and Cypress are just starting with the team this year, they have stepped up as leaders on the court.

Pierce has played basketball since she was young and is no stranger to PECS’ team.

“I have been playing with the Charter School for three years now and been playing basketball since I was about 5 years old,” Pierce said. “I like to play basketball because I like to run; it’s good exercise, (and) I want to carry it on for generations (because) my mom used to play.”

In addition to the leading girls on the team, the Lady Seminoles has some sixth-graders who contribute to what may be one of the basketball team’s most successful years yet.

“I have a few first-time players on the team,” Thomas said. “Raeley Matthews has come a long way; she is dribbling better and becoming more aggressive.”

Forward Alicia Fudge is another sixth-grader showing eagerness on the court.

“I like to play basketball because I get to run up and down the court, (and) I get my exercise,” Fudge said.

Hard work and heart put into the games has contributed to the Lady Seminoles going undefeated so far, including the wins against Yearling Middle, 36-7; Lake Placid, 41-14; Moore Haven, 44-13; and Ahfachkee, 54-45.

Under the direction of head coach Ryan Tedders and assistant coach Stephanie Tedders, the boys’ season is starting to look up for the Seminoles.

Although the boys lost their season opener at Yearling Middle School, 53-29, they are not letting that discourage them.

“Of course, everybody wants to win them all,” head coach Ryan Tedders said. “Losing the first game was very difficult. They now want that to be their only loss, and they can achieve that by working as a team and showing good sportsmanship.”

Tedders said his team could have won the first game, but the boys got behind and got frustrated.

With the leadership of three returning players, Demetrius Clark, Trevor Thomas and Drayton Billie, the Seminoles can guide their team to a winning season record.

“They lead by example (and) rarely out of position on defense,” Tedders said.