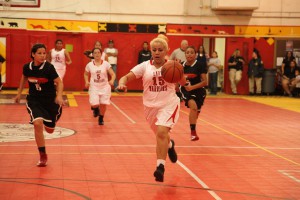 BIG CYPRESS — The basketball season is underway, and for the first time, the Ahfachkee Warriors and the PECS Seminoles met at center court. The Herman L. Osceola Gymnasium in Big Cypress was the site of the big games on Nov. 29 when the girls’ and boys’ teams each faced off. The atmosphere was vibrant with a crowd of vocal fans, family and friends of both schools’ teams.

With a record of 3-0 for the season before this game, PECS girls had reason to be confident; Ahfachkee’s record was 0-2. They beat the Ahfachkee girls 55-45.

In front of crowded bleachers, the Ahfachkee Scream Team led fans in cheers and performed during halftime and timeouts.

“This is the first time we’ve played PECS,” said Cicero Osceola, coach of the Ahfachkee boys’ team, who had a 0-1 record before the game. “It’s just like any other game; we’re ready and are going to have some fun.”

PECS boys were also ready for the match up. Their record for the season was 2-1 before the game.

The PECS boys’ team was victorious; they beat Ahfachkee 47-32.

Perhaps a new rivalry or Tribalwide camaraderie was forged during the event. Only time will tell.