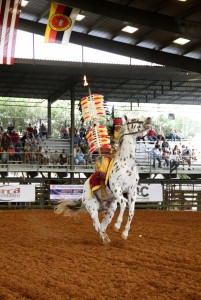 Making history and representing all that the Seminole Tribe stands for, Florida State University’s mascot, Chief Osceola holding his spear and riding horse Renegade, entered the rodeo grounds on Feb. 18 as the grand marshal of the parade.

“Me being a Seminole Tribal member and a true Seminole Florida State fan, that horse Renegade and Chief Osceola, they represent and embody that unconquered spirit,” said Norman Bowers, special assistant to the Chairman.

Bowers was instrumental in getting Osceola and Renegade to partake in the festivities, which was months in the making. Bowers approached Allen Durham, the owner of horse Renegade, during last season’s first Florida State football game and asked if he would participate in Brighton’s event. Durham was quick to accept.

“This is a tremendous honor for us to be here and be invited down to the Brighton Reservation,” Durham said.

The Osceola and Renegade program dates back to the late 1970s, when Durham’s father, Bill Durham, an FSU graduate, approached then Chairman Howard Tommie to ask for permission to portray Osceola. With permission, Durham’s father made promises to Chairman Tommie that they would always conduct the program of Osceola and Renegade with great respect to the Seminole Tribe. The policy was made that Renegade and Osceola would make no outside appearances aside from fan days and the occasional bowl and out-of-town games.

“However – this invitation – we were absolutely going to make the trip to the Seminole Reservation here in Brighton,” Durham said.

“We will come in and make an entrance just like we do in Tallahassee at Doak Campbell Stadium with the spear flaming and we will come into the center of the rodeo arena and plant the flaming spear here at Brighton Reservation.

“It is a great, great honor for us, something we are excited about and we are just happy that the Seminole Tribe of Florida has invited us here today.”

Other events were more expected, but just as enjoyable.

On Feb. 17, Brighton preschoolers kicked off the day by reciting the Pledge of Allegiance in English and Creek at the Fred Smith Rodeo Arena amphitheater.

As is typical of Field Day, the first day of the festival was an educational day. Elementary students from surrounding counties packed the stands.

School children were given an opportunity to learn the culture and traditions of not only the Seminole Tribe but also those of other Native Tribes from across the country.

“Our school is very diverse, so, being that it is diverse, it is good to include our Native Americans,” said Chetna Patel, a parent volunteer of Walker Memorial Academy in Avon Park.

“And right now I know fifth grade is studying social studies and they are learning about the Native Americans, so tying that all together is good for them to know where America’s roots are from.”

Students from Walker Memorial didn’t just get to watch, they got to participate. International native hoop dancer Kevin Locke of the Lakota Sioux Tribe invited them to take part in one of his dances. Locke said one of his joys is working with children to ensure the survival and growth of indigenous culture.

“It is a good experience for them to be that close and to be able to experience what they have experienced,” Patel said. “To have to go out there and say OK we have been out there, we know what this is like.”

Past performers, such as the Aztec Fire Dancers from Mexico City and the Haskell University Pow-wow Dancers, returned to show off their native dances. Spectators were invited to join in the fun.

“I love to dance,” said Sandy Rudolph, who was visiting from Mentor, Ohio.

“And to see the Tribe show their way of dancing that they have done from the beginning of time is miraculous to me.

“That’s why I got out there. I wanted to see and feel because you can feel the beat when you’re out there. Thrilling, just thrilling to be with them and with their costumes and to talk to them.”

“The students learned a lot about Native American basket making, doll making, and they got to sample the traditional frybread and really get to see some real, exotic animals as well as learn about the alligator wrestling,” said fourth-grade teacher Tracy Phillips from North Elementary in Okeechobee. “So it has been a lot of fun today.”

No Field Day is complete without bucking bulls. To end the festivities, Brighton hosted a televised Professional Rodeo Cowboys Association (PRCA) rodeo with the PRCA’s Xtreme Bulls rodeo as the finale on Sunday afternoon.

Next year will mark the 75th year for Field Day. What can people expect?

“We want to do something bigger and better,” Bowers said. “I don’t know what we’re going to do, but we’ll do it.”