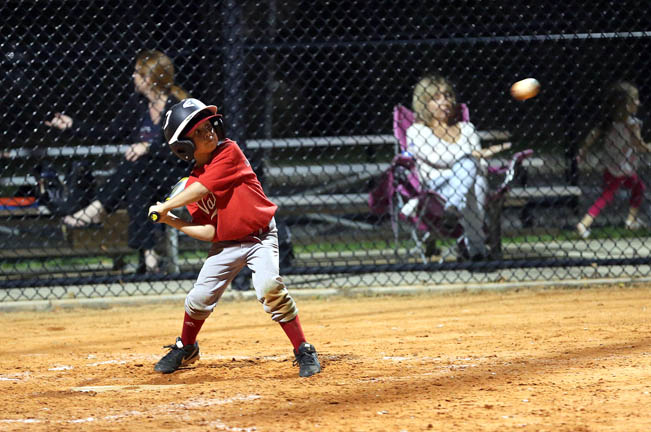 HOLLYWOOD — Enthusiasm wasn’t difficult to detect from the youngest baseball player on the field at Rotary Park.

When a coach asked who wanted to be a captain, Sylas Billie’s hand was the first raised.

When a close play at home plate occurred in the second inning, Sylas showed Major League determination to beat the throw, so much that he dove headfirst. When the postgame handshake line formed, Sylas was the first from his Nationals team to meet the opposing players from the Mets.

So it came as no surprise that Sylas – a 6-year-old playing in a Hollywood Hills league filled with 7- and 8-year-olds – was the last player to leave Duke Field before the lights were turned off Dec. 3.

The son of Melinda Billie and the late Markell Billie has been around baseball practically since he was born, and it shows on the field. How many 6-year-olds play with the intensity to dive headfirst?

“Pete Rose would be proud of you,” Nationals manager Hank Willen told Sylas during the team’s postgame chat in the dugout. He then explained to the players that rules require them to wait until they’re older to slide headfirst.

Sylas’ dirt-ridden uniform served as evidence to his busy game at the plate, on the base paths and in the field. He scored three runs and belted three hits while batting from the spot in the order that matches his No. 3 jersey. Defensively, his evening at first base including snagging a few high throws and scooping a couple low ones.

Although he likes playing catcher, Sylas also enjoys the action that comes his way at first.

“You get to get people out,” he said.

Sylas, who said it’s not a big deal playing against older kids in the league, joined his first organized tee-ball program at age 3 on the Hollywood Reservation. Melinda said he was initially slated to play this season with his peers in Hollywood Hills tee-ball, but coaches liked what they saw and moved him up to play in the 8-and-under division where batters see live pitching.

Sylas’ affection for baseball was born just after he was born. Melinda, who watched from the stands with Sylas’ younger brothers Nahki, 4, and Alihas, 1, recalled taking Sylas to his first Florida Marlins game when he was 3 months old. Several more trips to Dolphin Stadium followed prior to his first birthday.

Before he could stand as a toddler, Sylas was winding up thanks to Melinda’s dad, Wayne Mulligan, who is an assistant coach for the Nationals.

“He pretty much taught him to throw before he could walk,” said Melinda, who is often joined at the games by Sylas’ paternal grandfather Alan Jumper and aunt Alana Glover.

Sylas also latched onto a baseball movie: “The Sandlot.” Hence, his favorite player isn’t a current Marlin, but rather a legendary Yankee who made his Major League debut 100 years ago.

“He wants to be like Babe Ruth,” Melinda said.

“I like him because he hit a lot of home runs,” Sylas said.

Babe Ruth isn’t the only former pro baseball player Sylas admires. He also looks up to his uncle, Nolan Mulligan, who pitched in the Philadelphia Phillies minor league system before Sylas was born.

“Hopefully, Sylas will get there one day,” Melinda said.