NAPLES — About 50 fifth-graders at the Community School of Naples received an inside look at Seminole culture Oct. 20 thanks to their classmate O.B. Osceola III and his sister Bryce Osceola.
The duo gave a comprehensive presentation of Seminole history and brought a trove of patchwork, beadwork, sweetgrass baskets, dolls and carvings for students to examine. A slideshow

presentation included plenty of information about historical figures, as well as some of their own family members.

Since November was Native American Heritage Month, the social studies classes learned about Native Americans from the Northwest, Southwest, Great Plains and Eastern Woodlands, as well as the ancient Aztec, Pueblo and Mayan tribes.

“I thought this would be a good time to do it,” said O.B., 10. “I want to tell kids about our Native culture and how we do stuff.”

Bryce, a senior at Florida Gulf Coast University, is an experienced presenter and led the students through a crash course of Tribal history starting with the Seminole Wars and Osceola, Billy Bowlegs and Polly Parker.

“Osceola was the fiercest warrior and chief,” she said. “But he was tricked, ambushed, captured and died in captivity.”

Bryce told the students that after the Seminole Wars, there were about 300 Seminoles left in Florida; today there are about 4,200 Tribal members.

Bryce explained the Tribe’s connection to the natural world and told the students that plants and animals have the same rights as humans. She explained the clan system and asked if anyone had cousins with the same last name. Hands shot up and she said “that’s how we know we are related.”

A description of a typical Seminole camp included chickees with different purposes such as cooking, sleeping, working and ceremonial.

“There is always a fire going, no matter what,” Bryce said. “The most famous chickee maker is our grandfather O.B. Osceola Sr. He’s been everywhere and is considered the best.”

When it came time for questions, the students were a bit shy, so social studies teacher Rachel Hansson filled in with plenty of her own. Bryce and O.B.’s answers contained insightful information.
Cultural tidbits were shared, including the amount of beads a woman had signified her worth and wealth. Patchwork was made because they only had enough to trade for strips of fabric, which were turned into the colorful patchwork still being created today. According to stickball rules, boys use two sticks and cannot touch the ball with their hands, which gives them a longer reach with the sticks. For girls, hands are allowed, giving them more control.

President Andrew Jackson, in his quest to move all Indians to Oklahoma, pushed the Seminoles off their lands and into the Everglades.

“It was a hard place to live,” Bryce said. “Horses and cannons don’t do well in swamps. They knew people who didn’t know the land would struggle.”

In the past, hunting was necessary and every part of a deer was used; hides were traded, meat was eaten and jewelry was made from antlers.

“They fed the feet to the res dogs,” Bryce said. “Res dogs had their own job as guards. They took care of them by feeding them, but they weren’t pets.”

After the presentation, O.B. reflected on the experience.

“I thought we did well,” he said. “They learned what they didn’t know. I felt empowered and very powerful, like a chairman or chief. I was proud to tell them about what we do as a Tribe.” 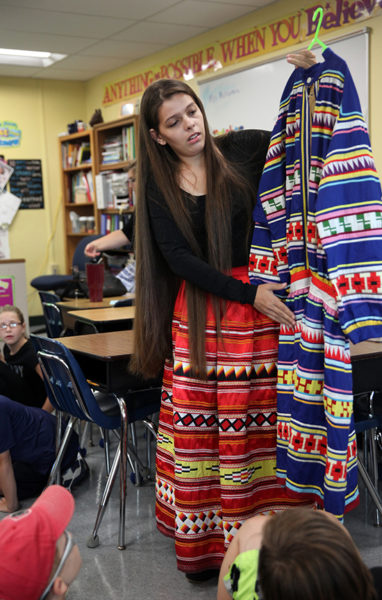 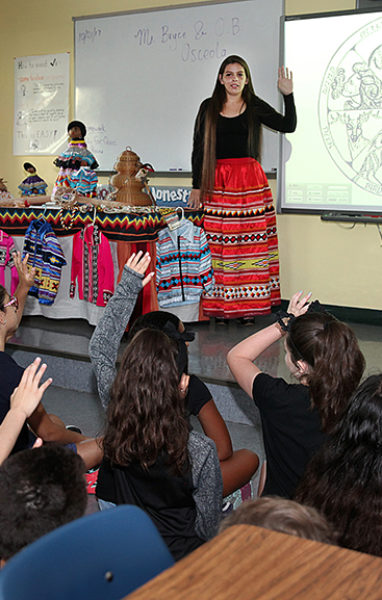 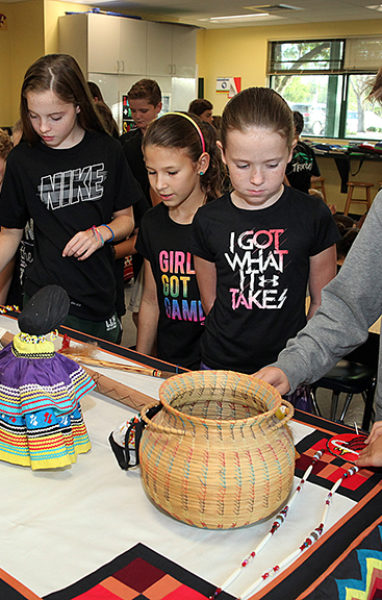 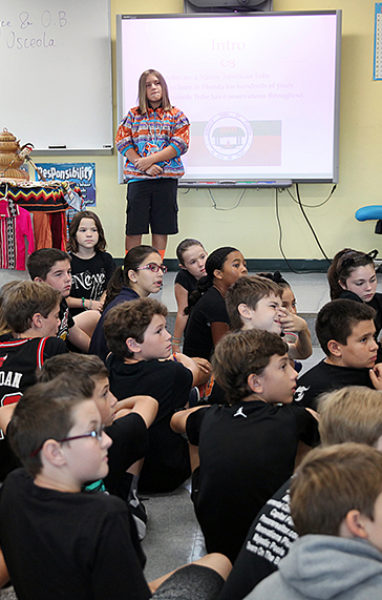 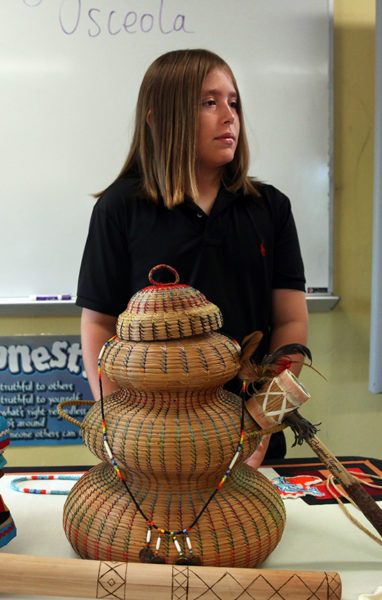