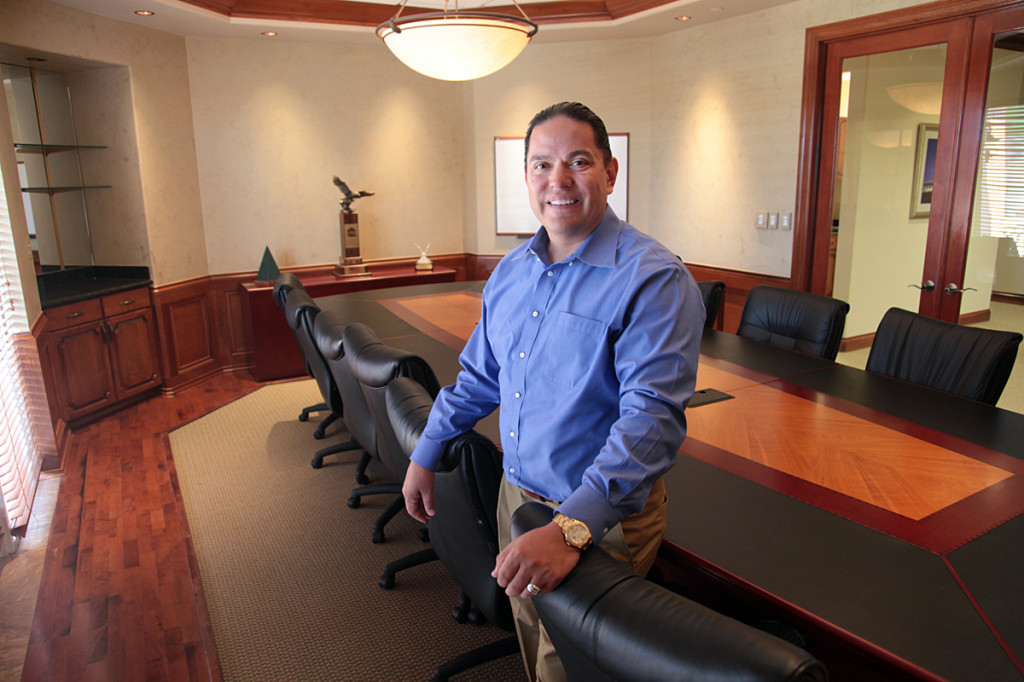 NAPLES — O.B. Osceola Jr. is on the verge of securing the second multimillion-dollar contract for his company, Osceola Group, based in Naples, in a few months.

The company landed a $13-million advertising contract with Seminole Gaming in October and is close to locking an $808-million deal to build a Hard Rock Hotel & Casino for the Menominee Tribe in Kenosha, Wis.

Osceola started Osceola Group in 2010 with a vision of conducting business in Indian Country on various levels. His group consists of a construction and development company, insurance company and marketing company.

“Most Tribes are always building something,” said Osceola, of Naples. “I can help them develop and build it, insure it after it’s done and market it. It’s a nice array of companies that can help a Tribe; it’s nice to be able to not just offer one thing.”

With a “couple hundred million dollars” in bonding capacity, Osceola Group is one of few Tribally owned businesses large enough to handle large-scale projects, Osceola said. He relocated the company to a 12,000-square-foot headquarters building in Naples to conduct business.

Having served as Naples’ Tribal Liaison from 2001-2011, Osceola traveled to events throughout Indian Country meeting other Tribal leaders and networking.

“The Seminoles have always been the LeBron James of Indians,” he said. “I had a front row seat and gained a lot of knowledge.”

Following his business model, Osceola creates partnerships with experienced companies to help ensure success. His construction group is affiliated with Cleveland Construction Inc. in Ohio; the insurance company is partnered with Wells Fargo insurance services; and the marketing company collaborates with Walz Tetrick Advertising in Kansas.

Bruce Pecore, a friend of Osceola and former Menominee Tribal legislator, told Osceola his Tribe had a chance to build a world-class casino and resort on 220 acres off interstate I-94, just 30 minutes from O’Hare International Airport in Chicago. Osceola saw an opportunity.

Osceola said he wanted to involve Hard Rock and spent a month building a proposal. Jim Allen, chairman of Hard Rock International and CEO of Seminole Gaming, agreed to partner with Osceola Group to pitch the creation of a Menominee Hard Rock Kenosha Casino. They won the bid.

If approved, the Menominee casino will include a 100,000-square-foot casino with 3,100 slot machines and 75 table games; 50,000 square feet of retail space and restaurants; a 400-room hotel with spa, pool and convention area; a 5,000-seat entertainment facility; and parking for 8,500 vehicles. The project will be built in two phases over about two years.

In August, the Menominee Tribe received approval from the Department of the Interior for the off-reservation casino, and the Bureau of Indian Affairs agreed to put the land into trust. Wisconsin Gov. Scott Walker must now give his approval. Walker said he wants all 11 Wisconsin Tribes to agree to the project.

As of press time, nine have approved. The Ho-Chunk and Forest County Potawatomi Tribes, both of whom have large casinos in the state, have not given approval.

Osceola and representatives of Hard Rock International met with the governor to state their case. Traditionally, the state has approved off-reservation casinos because their Tribes are located in the northern, less populated regions of the state. The governor, who can veto the project, has not made a decision nor indicated when he will do so.

“Studies say another casino won’t destroy the competition; it will grow the market,” said Osceola, who plans to market the property in Chicago. “Gamers like to move around from casino to casino. I think we’ll pull those Illinois people into Wisconsin.”

If built, Hard Rock Kenosha is expected to create more than 5,000 direct and indirect jobs and an estimated $600 million in payments to the state through a preapproved compact, according to the Hard Rock International website.

Osceola believes the endeavor could be the first time Hard Rock International has partnered with a Tribal entrepreneur on a project of this magnitude. Osceola said he has learned a lot from Allen and vice president for Seminole Gaming Jeff Hook.

“We’re not a slots-in-the-box; we are a truly iconic entertainment destination,” Osceola said. “I’m proud to say I’m a co-developer with Hard Rock and I’m excited about it.”

In October, Osceola Group was awarded a portion of the Seminole Gaming advertising and marketing account. With the $13-million, three-year contract, Osceola Group will purchase media for the advertising campaigns of the Florida casinos: Tampa, Immokalee, Brighton, Hard Rock Hollywood, Hollywood Classic and Coconut Creek.

Media planning and buying is the process in which ads are placed in various media, including television, radio and print. Key components include targeting a specific demographic and reaching it through strategic purchases. Osceola Group will focus on television and radio mediums for the Hard Rock account.

In addition to the Hard Rock account, Osceola Group also handles media planning and buying for the Prairie Band Potawatomi Nation in Kansas.

“We created the marketing group as a tool to get business from companies who want to do business with a Native American company,” Osceola said. “We’re going after Tribal and non-Tribal business nationwide.”

Hard Rock put out a request for proposal for its advertising account, and the two finalists were Osceola Group and a non-Tribal agency. They gave Osceola Group a chance to beat the competition’s proposal, which Osceola did.

“Gaming is a proponent of promoting Tribal entrepreneurs,” he said. “Why not give them an extra edge and keep it in the family?”

Osceola considers himself a jack of all trades who leads a group of experts in a variety of endeavors. He chooses partners carefully and gets to know them well before going into business together.

“Life is too short to do business with people you don’t like or trust,” he said. “The whole group of companies is doing well. This has been a great couple of months.”