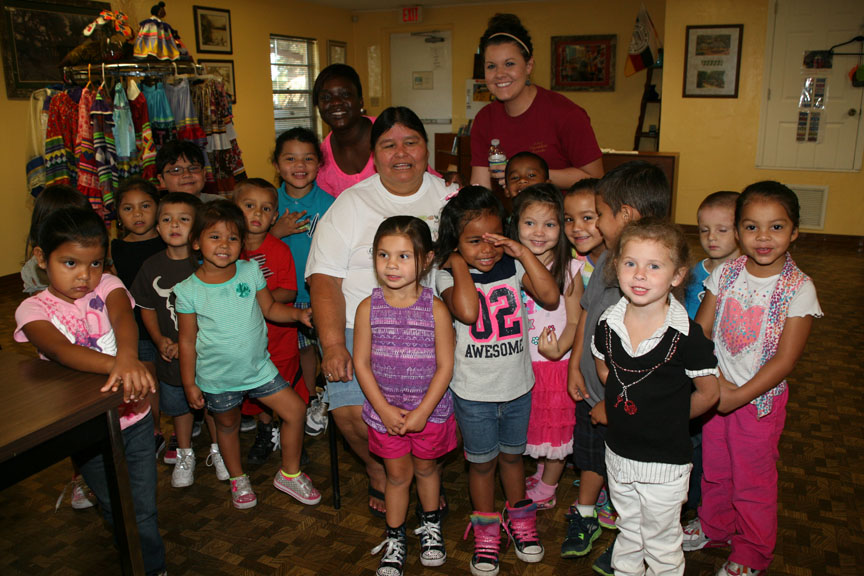 BRIGHTON — After 25 years of working for the Tribe, Oneva Baxley retired from the Culture Department. To honor her dedication to the community, her friends, family, co-workers and preschool class gathered on Aug. 26 at the Brighton Culture Center to say farewell.

The Pemayetv Emahakv Charter School preschool students recited  numbers in Creek to show their “grandma” how much they learned from her.  Then, head teacher Nicola Dixon, who worked closely with Baxley over the last few years, talked about the great impact she had on her.

“I am going to miss you,” Dixon said. “I learned so much Creek working with you.”

Baxley began working for the Tribe as a receptionist for the Cattle and Range Department and later performed several other jobs within the department.

A devoted family woman, she chose to quit her full-time job and take on a new role.

After 13 years of working with Cattle and Range, Baxley took a part-time job in the Culture program, working with preschoolers as a language instructor. She spent a couple years teaching Creek to 3-year-olds and ended her tenure  with the 4-year-old class.

After 12 years of teaching preschoolers and a few life changing events, including becoming a first-time grandmother, Baxley decided it was time to move on to devote more time to her family.

Doting over her grandchild, Baxley showed pictures and talked about her retirement plans.

“I want to spend more time with (the) grandbaby,” she said.

Baxley received several gifts at the event, including a Seminole dress made by the Culture staff and a photo album filled with pictures of her working with the preschoolers throughout the years.