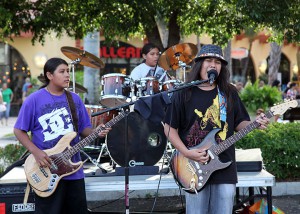 HOLLYWOOD — Food, music, motorcycles and classic cars were on the menu at the Miami Food Truck Rally held at the Hollywood Seminole Hard Rock Hotel & Casino on July 12. A party atmosphere pervaded the crowds of people wandering among the 20 food trucks while they decided what treats to eat. On the main stage, the Osceola Brothers Band entertained the crowd.

“This event brings people to the Hard Rock who normally wouldn’t be here,” said Jim Osceola, organizer of the rally. “They follow the food trucks.”

The Osceola Brothers Band pleased the crowd with a set heavy with classic rock and blues. Lead guitarist and singer Cameron Osceola, 15, wrote an original song titled “No Sunshine,” which the band also performed.

Brothers Cameron, bass player Tyson, 14, and drummer Sheldon, 11, have played together for about a year.

“We all get along and are happy playing,” Sheldon said.

The brothers’ musical career began when Cameron learned to play guitar at 9 years old. Sheldon got a drum set about a year ago and Tyson picked up the bass at the same time. Led by Cameron, the boys have played together ever since. Their younger brother Theron, 7, is learning to play the keyboard, so an expansion of the band may be imminent.

“The boys are awesome,” their father, Terry Tartsah Sr. said, “but they are brothers and they have their ups and downs. They also play baseball and are always very busy with activities.”

A lot of people came out to support the boys, including aunts, uncles, cousins and friends.

“They are just amazing,” the boys’ uncle Steve Osceola said. “They are also great athletes and good kids.”

Around 2,000 people attended the event, and about 100 motorcycles and 20 cars were on display. Among the 20 food trucks were The Rolling Stove, Cheeseburger Baby, ChurroMania, Daddy’s Grill, Don Mofongo and Fireman Derek’s World Famous Pies. The event also included bar stations by Tequila Ranch and Renegade.

As the sun went down over the rally, the aroma of food wafted over the crowd, the music played, and it was clear that visitors were having a delightful evening out.