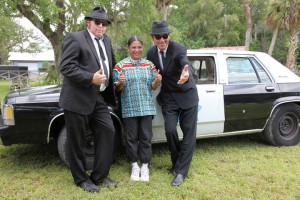 BIG CYPRESS — Linda Beletso remembers waking up in the middle of the night to the sound of her father’s guitar as a young girl. He wouldn’t exactly tip-toe home after his evening performances.

She and her siblings would gather around the fire on their camp and listen to Jimmie Robert play Hank Williams songs into the wee hours. I Saw the Light was a favorite.

On June 16, she stood where those tunes once floated through the air, welcoming the crowd to the seventh annual Jimmie Robert/Jr. Buster Memorial Music Jamboree, while an old black-and-white photo of her father sat on a table nearby.

About 30 Tribal members came out to commemorate Robert and his cousin Jr. Buster, who played rhythm guitar with Robert since he was a teenager.

“They’re both together now in heaven having a wonderful time in heaven with Jesus,” Paul “Cowbone” Buster said in his opening remarks. “I’m sure that they’ve got good guitars there. God has the best.”

Cowbone reminisced of his father’s performances with Robert, recounting some of their history.

He then kicked off the day’s musical performances with Leaving on a Jet Plane on a small, covered stage set up where a chickee on Robert’s camp once stood. He played a few more tunes, including a song he wrote for his grandfather, and wished everyone a happy Father’s Day.

In addition, the Florida Blues Brothers, dressed up as Elwood and Jake, arrived in the Bluesmobile and took to the stage to perform. Afterward, they posed for photos, signed autographs and even sang happy birthday to Tribal member Lorraine Posada, for whom a cake was brought out. Posada, the granddaughter of Robert, brought her three children from Immokalee to the jamboree.

The final group to take the stage was the Cowbone Jr. Band, led by Paul “Chunky” Buster. Despite a few rain showers, the show went on. Chunky sang a few songs memorializing the musicians and told some stories as well.

Family and friends from Big Cypress, Hollywood and Immokalee enjoyed the show and recalled the days when Jimmie Robert and Jr. Buster entertained with their music.

“From the stories [my mom] tells, I almost miss him even though I didn’t get to meet him,” Posada said. “I think he would have been a great grandfather.”