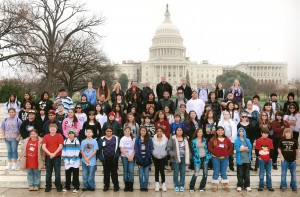 WASHINGTON, D.C. — Sixty-two middle school students got an up-close look at Washington, D.C.’s famous monuments and memorials during an exciting and educational trip from Dec. 4-8.

This is the third year middle school students took the trip to the famous Capitol city, but in order to attend, students needed to have at least a 2.0 GPA and needed to have good attendance in school.

“They see it in the text books and history books and pictures,” said chaperone Laverne Thomas. “I think they should see it and experience that.”

Seventh-grader Deliah Carrillo saw the famous district for the first time on the trip. Carrillo attends Pemayetv Emahakv Charter School and couldn’t believe she had the opportunity to sit on the steps of the prestigious buildings she often saw on TV.

They wandered through war memorials, including the Korean, Vietnam and World War II war memorials; they gawked at memorials of historic greats, including Franklin Delano Roosevelt, Thomas Jefferson and Abraham Lincoln; and, this year, students received an extra treat: They visited the new Martin Luther King, Jr. National Memorial, which was dedicated in October 2011.

They also made their way through museums galore: Smithsonian museums, including the National Museum of Natural History, American History and Air and Space, and the Native American Museum.

Layne Thomas, a Pemayetv Emahakv Charter School sixth-grader, said the Native American Museum gave him a broader perspective on Tribal culture because he learned about the different Tribes around the nation.

The group had lucky timing upon arriving at the Supreme Court because they got to sit in on a Supreme Court hearing that happened to be in session. They also visited the Library of Congress.

“I like looking at all the monuments and all the memorials there,” Layne Thomas said. “It helps us learn about the history of the U.S.A. It helps us learn more about what our presidents and important people did for us.”

After making a 3-hour drive from D.C., the group explored two of America’s most historic and well-preserved examples of Colonial government and culture: Jamestown and Williamsburg.

In Jamestown, they learned about the founders and the Virginia Indians they encountered.

“When we went to Jamestown, they talked about that Native Americans were here and have been here and did help the settlers,” Laverne Thomas said.

Her son, Layne Thomas, said he learned that the Native Americans taught the settlers how to grow fruit and make skin for war and how they helped settlers build shelters out of clay.

In Williamsburg, one of America’s oldest cities, the group treaded through historic homes, gardens and marketplaces, as well as the Colonial courthouse, the blacksmith shop and the old Capitol.

Each day, students met with teachers from the Close Up program, the nonprofit educational organization that organized the trip itinerary. Close Up instructors reviewed the history of the monuments that students visited, complimenting the students’ knowledge from their history classes.

Carrillo’s mom, Joyce Piz, also got to experience D.C. for the first time as a chaperone on the trip. Piz said it gave her a lot to talk about with her daughter and said it’s important for youth to know about their government’s history and current affairs.

“It was very educational,” she said. “I enjoyed it as much as my daughter did. It was a blessing to go.”