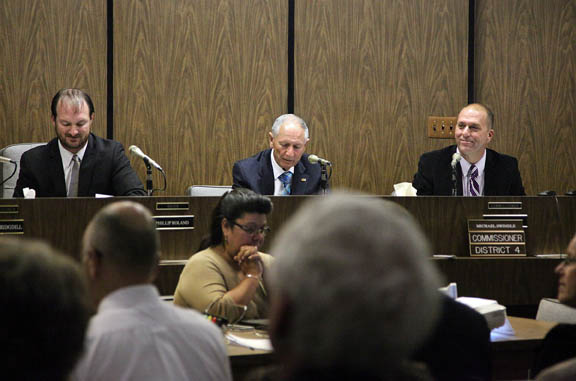 CLEWISTON — Despite pleas from Seminole Tribe of Florida members and environmentalists to stop Florida Power & Light (FPL) again from building a massive electric generating plant on land next door to the Big Cypress Reservation, Hendry County Board of County Commissioners voted for comprehensive land plan changes that could make the power plant a done deal.

The three amendments were written and submitted by FPL, reviewed by the county’s Land Planning Agency and then recommended to commissioners for the July 14 vote.

Commissioner Janet Taylor was not present for the 4-0 vote.

The proposed changes are now in the hands of the state land planning agency, also known as the Department of Economic Opportunity (DEO), to begin a state-required review process prior to adoption into law.

The recommendation to change county law came on the heels of a recent decision by the Second District Court of Appeal in favor of the Tribe. It was the latest win in the Tribe’s continuing effort to stop the power plant from being built on the 3,120-acre site on County Road 833, also known as Sam Jones Trail.

Previous attempts to change and translate zoning laws for plant construction have been blocked by the Tribe’s lawyers since 2011. Last year, following a weeklong court battle, a judge ruled that an ordinance passed by commissioners in 2011 to allow the plant was unenforceable because it conflicted with the county’s land plan.

FPL and Hendry County’s appeal to toss the judge’s ruling was denied June 5.

The commission meeting included a presentation for FPL by land-use planner Ethel Hammer, who explained the three new amendment proposals. Concerned citizens were then heard.

According to a study provided by FPL, the immediate economic impact to the county is $2.2 million in property taxes for the first year and an estimated $352 million in taxes over 25 years.

Hammer said a public facilities analysis indicated that the power plant would create no impact to public water, transportation, groundwater, public recreation or schools. She said more than 28 archaeological sites would be protected and that nine of 15 sites eligible for listing in the National Register of Historic Places, including a possible historic trail, would be preserved.

Hammer also said the plan allows 925 acres of open land so that wildlife, including several endangered animals that roam through the land such as the Florida panther, can connect to the outside.

But during public comments, all but one of 25 who spoke asked the commission to vote against the amendment changes.

Big Cypress Board Rep. Joe Frank, who lives just a few miles from the proposed site, said he has always been against the FPL power plant location next to the reservation because of wildlife, water and cultural reasons. Now he worries that if all three proposed amendments are adopted and become law, FPL will be in charge.

“You are putting the cart before the horse,” Rep. Frank said. “You will guarantee the power plant in black and white.”

Attorney for the Seminole Tribe Andrew J. Baumann said the fight against FPL and Hendry County has come full circle.

“It’s been four years almost to the day that all of this began. I’ve seen almost every slide in tonight’s presentation already. The Seminole Tribe was against it then and nothing has changed,” Baumann said.

The first amendment adds a new Hendry County future land use category called Electrical Generating Facility and it amends the county’s industrial use category to allow power facilities less than 75 megawatts. It permits property owners to build large power plants in Hendry County but requires them to write and submit two additional amendments to make it happen: one for the specifications of the plant and the second to change the county’s land map to include the location’s new zoning.

Further, the amendment deletes a current future land use requirement, by use of a planned unit development (PUD) tool that demands compliance to the comprehensive plan, including a cultural resource assessment of the property by a professional archaeologist and an approval letter from the Florida Division of Historic Resources.

Hendry commissioners on July 14 voted to move forward with all three amendments, giving FPL a nod toward building one of the largest power plants in the nation on culturally and environmentally sensitive land.

In the specification amendment, FPL describes the development of a gas-powered, electrical generating plant, solar power plant or a combination of both, up to 15 stories tall and on 70 percent of the 3,120 acres. The gas-powered plant could consist of three combined cycle units each with three combustion turbines and one steam engine.

The amendment reads: “The maximum estimated power generating capacity for the Hendry Next Generation Clean Energy Center is 4,300 megawatts … related uses for the facility include processing, warehousing, educational and visitor centers and raw materials storage.”

The state-required amendment review process could take up to four months before a final public hearing is held by Hendry County.

Here’s how it works: The DEO must receive the proposals within 10 days of the last public hearing and then send the proposals to various agencies for comments. Reviewing agencies include the Department of Environmental Protection, Department of State, Department of Transportation, the Fish and Wildlife Conservation Commission and others. The DEO has 60 days to report back to the county with agency comments and their own objections or recommendations.

To adopt the amendments into law, the county must hold a final public hearing at least 180 days after receiving the DEO comments. If the county adopts the amendments, affected people can file a petition within 30 days with the Division of Administrative Hearings to challenge the amendments on grounds that it is not in compliance.

But Baumann said it is possible the process from receipt of the proposed amendments in Tallahassee to Hendry County’s final hearing and potential adoption of the amendments could be completed in as little as one month.

“Right now we are studying the amendments and monitoring what happens at the state review level,” Baumann said. “From a legal standpoint, we can’t challenge it now.”

FPL spokesman David McDermitt said the commission meeting only “established parameters” of the plant, such as the maximum amount of megawatts that could be produced.

It did not give permission to build the power plant nor did it state that FPL would actually build it at all, he said. Those decisions would be made if the amendments are finally adopted.

“What could happen was proposed,” McDermitt said. “This is not the end of a process, but a beginning. Now we need to come back with a detailed proposal.”