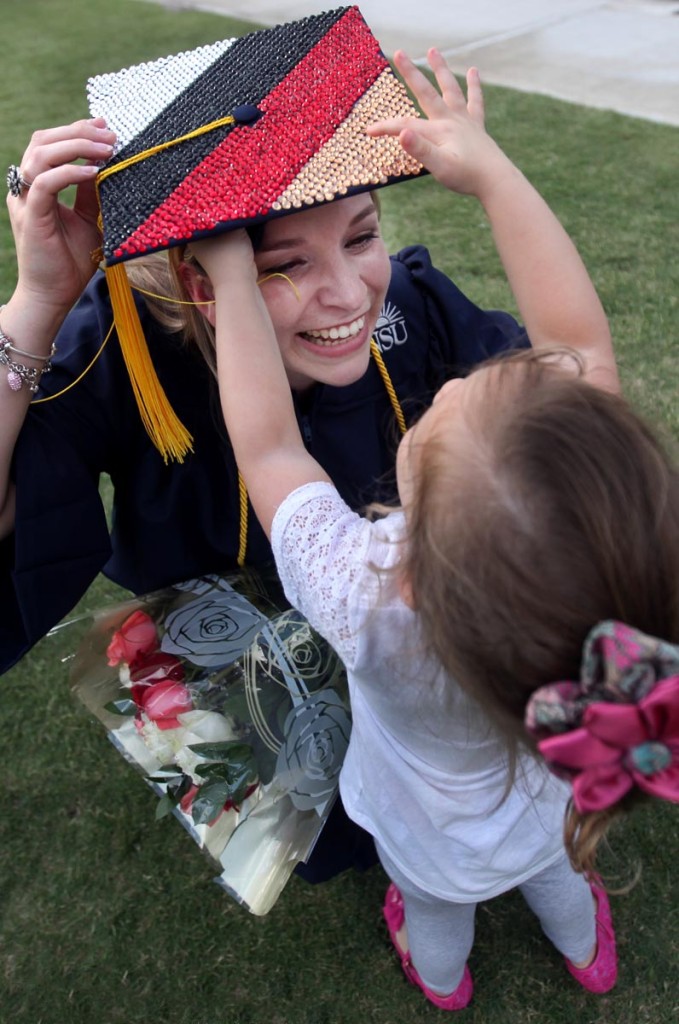 DAVIE — Before Sheyanna Osceola marched down the aisle at Don Taft University Center as a 2015 Nova Southeastern University (NSU) graduate, she topped her head with a mortarboard bejeweled in Seminole colors.

Afterward, she placed the cap on her 2-year-old daughter as if she glimpsed the future.

“If I have one hope, it is that my daughter, Nayelea, will remember this and be proud. For everything I tried to do, and whatever happens, she’ll know that I went to school and studied hard and did what I needed to do for us,” said Osceola, 24.

Meanwhile, Osceola will fill the wait for law school to begin in fall of 2016 by earning a nursing degree.

Ellen Kracoff, who Osceola credits as one of her most inspirational paralegal professors, is not surprised that her former charge would expand her legal career options via nursing. Nurse paralegal is an emerging career hybrid and growing in demand.

“A nurse paralegal can read the medical reports, understand them and interpret them. Others look at a medical report and it’s like reading a foreign language,” Kracoff said. “But Sheyanna? She is so bright and learns like a sponge. She will be able to do both.”

Osceola, the daughter of telecommunication analyst Tabitha Osceola and housing regional manager William Osceola, said she wanted to be a lawyer since she was a freshman at Hollywood Christian School. But she was also a big fan of science and medicine television shows like “CSI” and “House.”

“The best part of law is the argument weather you believe it or not, or if you believe what the other side is thinking,” Osceola said. “I also like to prove when I’m right and get others to agree with me.”

During her years at NSU, Osceola interned with the Tribe’s Legal Department under General Counsel Jim Shore. In her teens, Osceola was an accomplished barrel racer with the Eastern Indian Rodeo Association and a competitor at the 2005 Indian National Finals Rodeo.

Tabitha Osceola said her daughter’s drive and determination to finish on top were obvious since kindergarten when she excelled in reading and was sent by her teacher to read books for first-grade classes. In high school, she was accepted into the faith-based People to People Student Ambassador Program that fosters peace worldwide through intercontinental travel.

“She just always achieved what she put her mind to. She finishes what she starts,” Tabitha Osceola said.

“Sheyanna knew all along what she wanted to do and that she would have to work to get it. With us, it was grade point average. Keep up the GPA and everything follows,” he said.

One of 7,500 NSU graduates this year from 45 nations worldwide, Osceola is the first in her family to earn a college degree. But she will not be the last.

Her sister Shelby Osceola, 26, is majoring in veterinary medicine at Troy University in Alabama, while Tabitha Osceola is earning an Associate of Arts degree from Broward College.

Kracoff said Sheyanna Osceola’s choice to bounce off her paralegal degree into nursing and then law school at NSU further solidifies her future. All her credits, since starting in business then switching to law, bolster the next degree.

“It’s a reverse domino effect. It’s graduating with a degree that will earn money right away and then building on that,” Kracoff said. “Like Sheyanna, any student who continues in the excitement and passion of learning is a sponge.”