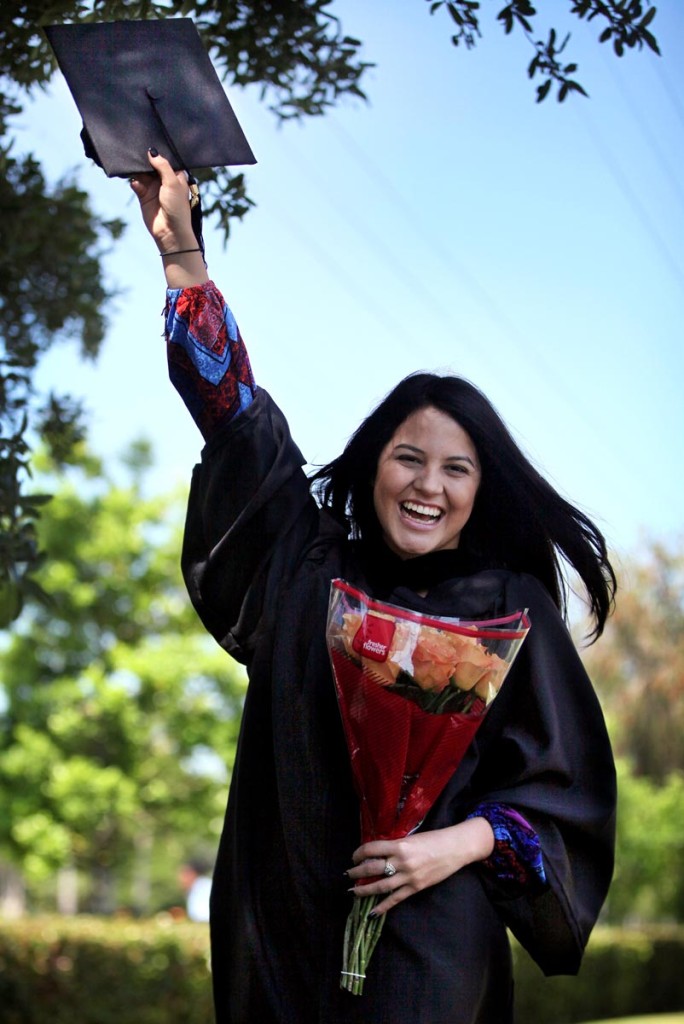 FORT PIERCE — Apolonia Nunez will never forget the first few minutes of her first day of college in 2013.

“I walked into the classroom and a girl looked at me funny and asked, ‘What are you doing here? Why are you here, and how old are you?’ I said ‘13’ and the girl just kind of giggled,” Apolonia, now 16, said.

But no one laughed when Apolonia’s first English test came back with one of the highest scores in the class.

“That was the first moment people saw me as an equal,” she said.

Fast forward to May 2, 2015 – graduation day for Indian River State College (IRSC) at Havert L. Fenn Center in Fort Pierce – when the daughter of David and Anita Nunez, of Okeechobee, became the youngest Seminole Tribe of Florida member to graduate from college.

Home-schooled through 12th grade while simultaneously enrolled at IRSC, Apolonia walked across the stage dressed in a graduation robe and mortarboard to collect her Associate of Arts degree even before her high school diploma arrived in the mail.

Her proud parents wiped away joyful tears during the ceremony as they watched the first member of their family to receive a college degree.

Long story short: Anita Nunez knew many years ago that her daughter would succeed academically – she was previously assessed as intellectually gifted – but when Apolonia was an eighth-grader facing a traditional high school path, her mother focused on finding a more efficient and personalized education route.

Anita Nunez discovered that her daughter could test through grade levels at her own pace while enrolled in college if she was home-schooled.

“I brainstormed about what to do and then it occurred to me: I could be my own daughter’s principal,” Anita Nunez said.

With Nunez in charge, mandatory testing and subsequent grade progressions occurred as Apolonia was ready.

“It all happened in the blink of an eye,” Apolonia said. “It’s overwhelming how far I’ve come in two years and how it’s paid off, but I’m certainly not done. This is an amazing stepping stone.”

The journey so far has been fun and exciting, often challenging and sometimes difficult, she said.

The diligent student thrived in philosophy and criminal justice classes, and yearned for more. Her once hate relationship with mathematics is now “kind of enjoyable.” And the first essay she thought she “bombed” turned out to be a 94.

Socialization had a wobbly start.

Classmates who did not know Apolonia’s age wondered why the friendly and outspoken student turned down invitations to hang out. Instead of driving off campus with them for lunch or dinner, she ate alone at the school’s pingpong tables.

“At first I was like some 13-year-old with a Barbie doll in her back pocket. But I engaged in class and I gave people a chance to see a side of me that no one expected,” Apolonia said. “They saw my intellect. I earned my way in the class like everyone else and they respected me more for it.”

At age 15, when an unwitting 19-year-old asked her to call him on the telephone, she gracefully turned him down. Eventually, a few classmates began bringing lunch, too, and meeting her at the pingpong tables.

For fun, the teen learned boxing and kickboxing and currently serves as Okeechobee’s Miss Speckled Perch and Miss American Legion.

She recently built a birdhouse and hopes to someday learn Seminole traditional crafts.

Her mother is her hero.

“She is the kind of mother who believes in you more than you believe in yourself. She pushes me and motivates me. She showed me what I could do and that I am capable of it,” Apolonia said. “And when I was successful, she was not surprised. She knew I could do it all along.”

Apolonia is mature beyond her years. Her personal philosophy for success, described a week before graduation, was nearly echoed during the commencement address by U.S. Marine Lt. Col. Curtis Carlin, an IRSC alumnus.

Both advocate living fully in the moment and in deliberate awareness that choices made in the present have and affect later.

“Don’t seek instant pleasure. When you want cake and you eat it, it’s gone. Seek joy instead. Joy is different. When I trained for the Marine Corps it wasn’t pleasant. There was dirt, grime, yelling, lack of sleep … but at graduation? That was joy,” Carlin said. “Like you, the hotter the fire and the more pounding you take, the stronger the core.”

“Whatever you decide to do in the moment must be based on what pleasures you most, like, if it pleases you in the moment to go to the beach,” Apolonia said. “But going to the beach does not please me more in the long run than walking across the (graduation) stage. If you want to take a semester off or quit school, you will not experience the overwhelming joy of being proud of yourself … hard work and dedication brings joy, not just satisfaction, real joy.”

David and Anita Nunez’s other daughters are also motivated to succeed.

Airianna, 18, graduated from high school as a home-schooled student in November and is on track to receive an associate degree from IRSC by fall 2015. Alicia, 21, a student at Santa Fe College, plans to become a doctor of nursing practice. Amelia, 20, owns a landscaping company.

For Apolonia, the future includes pursuing a bachelor’s degree in criminal justice followed by law school. She envisions landing in a high-ranking position with the FBI or the CIA – or maybe opening her own paralegal firm.

“Hopefully, by the time I am 30, I will be all settled in with a lot more experience than other people my age,” Apolonia said. “I will have built up my name and my empire.”