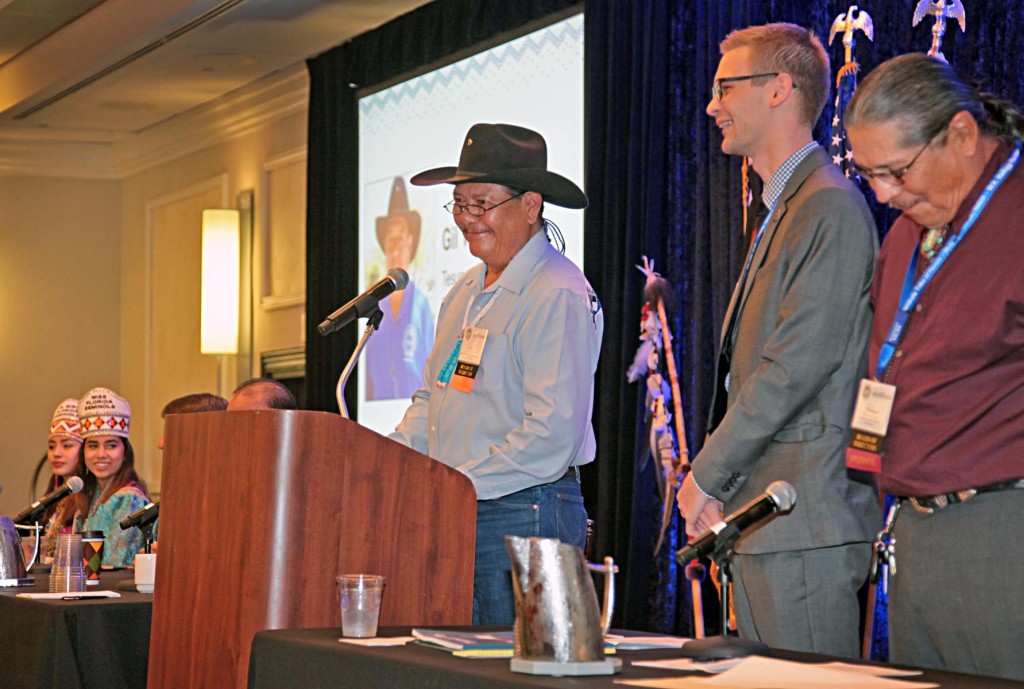 FORT LAUDERDALE — When Kirk Crow Shoe was a young boy, he and his twin sister Kimberly were adopted by non-Native educators working with the Department of Indian Affairs in Canada.

The adoptive father abused Crow Shoe until he was 17.

Crow Shoe told his story April 14 to about 1,000 people at the 32nd annual National Indian Child Welfare Association (NICWA) conference at the Hyatt Regency Pier Sixty-Six in Fort Lauderdale. The Seminole Tribe was the host sponsor.

“The first thing taken from us were our names,” said Crow Shoe, of the Blackfoot Tribe in Alberta, Canada. “He abused me and she didn’t save me. Nobody heard me, nobody saved me.”

The Indian Child Welfare Act (ICWA), passed by Congress in 1978, was designed to keep Native American children with Native American families. The law aims to protect the best interests of Indian children and to promote the stability and security of Indian Tribes and families. Crow Shoe, born in 1964, didn’t benefit from ICWA.

“I learned not to trust people and that the adults closest to you will hurt you the most,” he said. “But my story is about recovery, healing and resiliency. I am not defined by my history.”

When he was 20, his birth mother found him working on a ranch in Wyoming. He returned to his reservation in Canada and learned his culture. He has worked on his recovery ever since.

The theme of the NICWA conference, held April 14-16, was “In the best interest of Native children – ICWA’s enduring legacy.” Speakers included representatives from the Bureau of Indian Affairs (BIA), Department of Justice, Department of Health and Human Services, Tribal leaders and professionals in child welfare advocacy.

“Because of you, ICWA stands strong and government is paying more attention to our children,” said Gil Vigil, president of NICWA, to attendees during the opening session. “We gather here to learn from one another and help each other with the challenges we face. It’s our hope this conference will rejuvenate your mind, heart and passion. We are here for the kids who may not have a voice; we are their voice.”

“What brings us to Fort Lauderdale is that promise we make to all of our children: that their safety and well-being is our highest priority, that they are sacred beings – gifts from the Creator to be cherished, cared for and protected,” said Tony West, associate attorney general, U.S. Department of Justice. “Tribes no longer face the prospect that a quarter to a third of their children will simply disappear, shipped off to homes halfway across the country.”

He said many Tribes and states have partnered to implement ICWA to ensure Indian families and cultures are treated with the respect they deserve.

“Every time an Indian child is removed in violation of ICWA, it can mean a loss of all connection with family, with Tribe, with culture. And with that loss, studies show, comes an increased risk for mental health challenges, homelessness in later life, and, tragically, suicide,” West said.

During a youth experiences panel, Dorian E. Le Beau, 14, recounted her seven years in foster homes. The last one wanted to adopt her and her siblings. A lawyer intervened.

“I didn’t want to be adopted,” said Le Beau, of the Oneida Tribe of Wisconsin. “Kids know when they are loved. If they are old enough to speak, they should be heard.”

Angel Van Brunt was among the first Native American children to benefit from ICWA. Now a Title IV-E foster care coordinator with the South Puget Intertribal Planning Agency in Shelton, Wash., she was a foster child herself in non-Native American homes starting in the early 1980s. The system kept her with her siblings, but they moved to many different homes.

“I remember being that kid who had to sleep in a stranger’s home,” said Van Brunt, of the Colville Tribe. “Foster kids have to adjust to different homes and environments quickly. Our concept of time was different; if we liked a home, we thought we were there for a really long time. If we didn’t like a home, we also thought we were there for a long time. There was no way to keep track of time.”

Today she makes sure the foster kids she works with keep a “life book,” like a scrapbook, in which they document their lives with photos, report cards, journal entries and anything else they want to include.

Susan Starr, a case worker and foster care licensor with the Muckleshoot Tribe in Auburn, Wash., was also a foster child in non-Native homes. She was raised off the reservation and moving back to her home years later proved difficult.

“My Indian identity is so important to me,” she said. “But I don’t weave or speak the language, so in trying to find my identity there was a lot of rejection. You have to be strong, if not for a higher power I wouldn’t have made it. I moved back home to share my story and bring healing to people.”

Van Brunt and Starr have known each other for years but only on the softball field, often playing against each other. They didn’t know they worked in the same field or shared the same kind of childhood until the conference.

“We’ve already made plans to co-facilitate training together for foster parents,” said Van Brunt, who started her professional life as a Head Start early childhood teacher before transitioning to foster care. “I’m doing what I should be doing. I use my experiences to train foster parents.”

“We can adapt them to our own culture and Tribe,” Van Brunt said. “I’ve learned the issues throughout Indian Country are the same. To be able to network and help each other and our kids is important.”

Shannon Porter, a guardian ad litem who makes recommendations to the Mille Lacs Band of Ojibwe Tribal court in Minnesota, attended the NICWA conference for the first time.

“I’ve learned so much,” she said. “There were a lot of professionals from my area I didn’t know before. The networking has been the most useful thing so far. I have new contacts and know of more services available to our kids and parents.”

With the passage of ICWA, policies allowing Native American children to be adopted out to non-Native families came to an end. Violations of the law still exist, including last year’s Baby Girl case, but the BIA uses those cases to amend and strengthen the law.

“Protecting our Indian children is the most important work,” said Kevin Washburn, assistant secretary of Indian Affairs, U.S. Department of the Interior. “This is the one time each year their work is celebrated. It’s nice to have an annual conference where people who do the work come together. They momentarily get to step away from what they deal with every day, although a lot of these people are still on call.”